Canavan kicks Tyrone into a semi-final with Derry

The Red Hands edged out Donegal in Ballybofey 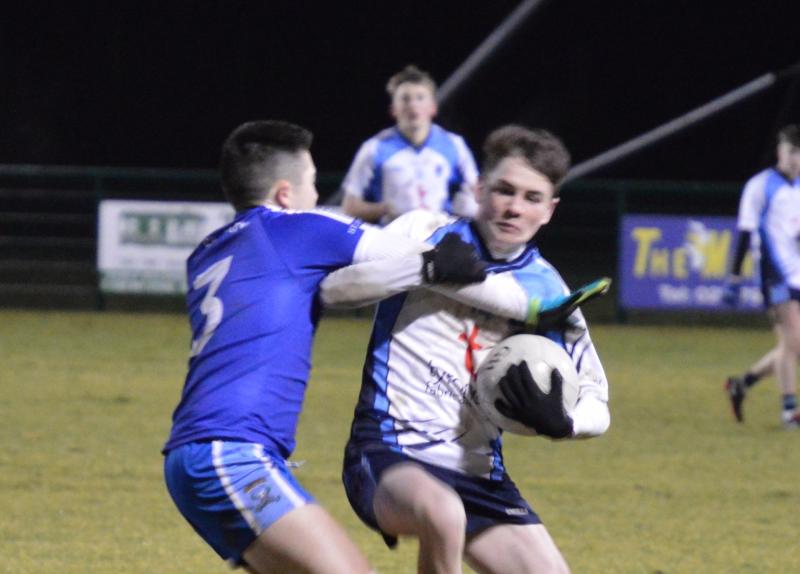 Derry advanced to the Ulster MFC semi-final with a 1-7 to 0-8 win over Armagh at Owenbeg on Sunday.

Martin Boyle's aide will face Tyrone who came through after a close battle with Donegal in MacCumhaill Park, Ballybofey.

DONEGAL 0-7
TYRONE 0-8
The Red Hands men could afford to hit 13 wides, but they had Ruairi Canavan in their ranks and although he accounted for a good number of those wides, he was still the match winner.

In the end Canavan was the difference between the sides. He looks like a real chip of the old block and was dangerous off either foot. The Tyrone side were strong around midfield with Conor Colton very good in the air.

Donegal, however, competed well at midfield and in defence, but up front they lacked a forward of real cutting edge. But despite that Conor O'Neill at full-forward did well with whatever ball came his way and at times it was not perfect.

The game was played on a very dry afternoon for December but still the underfoot conditions were soft and players were having difficulty in keeping their feet. This led to mistakes and turnovers, but both sets of players battled gamely.

Tyrone started the brightest and had the scoreboard ticking after just 13 seconds. Oran McGrath was the scorer as he ghosted through the Donegal defence.

But to be fair, the Donegal rearguard gave up very few soft scores after that. Indeed, both teams found shooting particularly difficult with Tyrone hitting six wides and Donegal four in the opening half while the Tir Chonaill boys also dropped a few short.

Ruairi Canavan, son of former senior star Peter, doubled the Tyrone lead on five minutes, converting a free before Donegal got on the board a minute later with Eoin O'Donnell finding the range from distance.

Donegal should have been level on nine minutes when full-forward Conor O'Neill won a soft free but Luke McGlynn was short with his effort.

And two minutes later Tyrone got their only other score of the half and were fortunate to do so as Donegal should have had a free out in the build-up. Conor McGullion took advantage to hook over for a 0-3 to 0-1 lead.

Tyrone did have a goal chance on 15 minutes as Ruairi McHugh got through after a one-two but he lost his balance at the vital moment in front of goal.

LISTEN: Hear what Tyrone manager Collie Holmes had to say after the game.  CLICK HERE...

Before the water break Robbie MacDonnell powered over Donegal's second point to leave just one between them.

Donegal has chances after the water break but their decision making let them down. Ruairi Canavan missed two frees while big midfielder Conor Colton made a number of big marks for the visitors.

Six minutes from the break Luke McGlynn won and pointed a free to draw Donegal level. The home side were beginning to find their way and their defence was extremely tight.

They took the lead just on the stroke of the half-time whistle and it was the score of the half. Midfielder and captain Drew McKinney, impressive throughout that opening half, found Conor O'Neill with a great ball. O'Neill called for the mark and fired over.

Donegal got a tonic start to the second half with Senan Quinn finding space in the middle of the Tyrone defence and despite being pulled back, fired over for a two point lead.

Ruairi Canavan became more and more involved for the Red Hands. He drove wide from the middle of the field and then blazed wide with a goal chance on, after he had got in behind the Donegal defence. His battle with Cian Mulligan was one of the highlights of the day.

By the 38th minute Tyrone were back on terms as Canavan struck, first after cutting in from the sideline and firing over with his left, and then after a big turnover, he was on the end of the move.

After some patient Donegal play, Blake McGarvey edged Donegal back in front on 41 minutes. Tyrone got back on terms after a very rare occurrence. A '45' was moved on but it resulted in another '45' and this time goalkeeper Harry Morgan came forward to fire over.

There was another strange decision by the referee (one of many) when he called the water break as Donegal were awarded a 40m free. David Boyle, who was just on the field as a substitute, drove the free wide when play resumed.

The final quarter was close but Ruairi Canavan, the standout player, struck once again to put Tyrone ahead.

Donegal tried hard with Conor O'Neill to the fore and they had a goal chance on 60 minutes when they worked an opening for Robbie McDonnell. He went for goal but it was blocked. Maybe in hindsight he could have taken a point to level matters.

To make matters worse Canavan popped up again at the other end to stretch the Tyrone lead to two. Tyrone had a shout for a penalty in those closing minutes also when Michael Rafferty seemed to be impeded. Donegal did mount a late challenge and Eoin O'Donnell did get a point in the fourth minute of added time but by that stage Donegal needed a goal.

It was a disappointing end for Donegal, who were in contention throughout, but in truth Tyrone were worthy winners, mostly because they had Ruairi Canavan in their ranks.