The Oakleafers face Tyrone in the semi-final 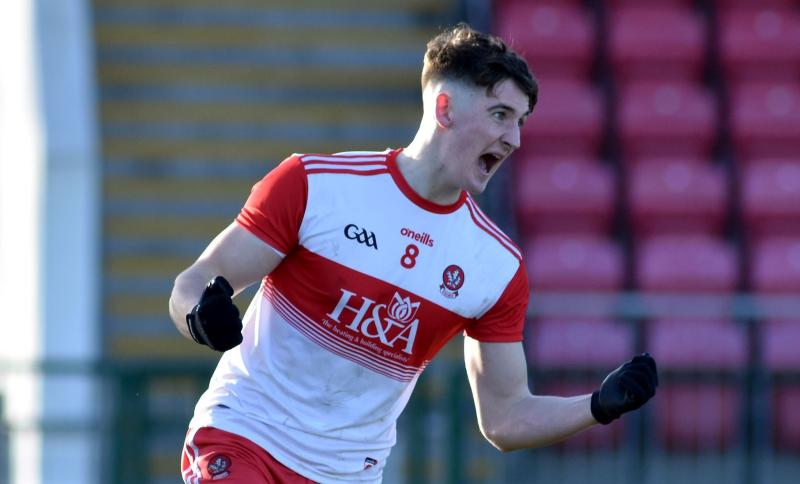 A goal from midfielder Dan Higgins helped Derry book their place in the semi-finals with victory over Armagh on Sunday afternoon at Owenbeg.

Martin Boyle's side will play Tyrone in January, after the Red Hands saw off Donegal in their quarter-final.

Captain Matthew Downey landed 0-5 and it was his inch-perfect pass that found Dan Higgins for the game's only goal. Higgins nipped in ahead of goalkeeper Cathal Doherty before slotting coolly to the corner of the net.

It put Derry 1-5 to 0-6 ahead, but points from substitute Matthew Lennon and Darragh McMullen levelled matters.

With six minutes remaining, Eoin McEvoy hit Derry's third wide of a 10-minute spell they dominated. From Doherty's kick-out Dan Higgins fielded well and the home side played keep ball, with captain Downey directing operations. Wing back Doherty cut through, like he did all afternoon, and was fouled. The free was brought forward for dissent and Downey put Derry on their way to victory.

Armagh had the better of the first half and led 0-4 to 0-3 at the break. Sean Deehan clawed a half goal chance off the line and goalkeeper McGonigle was very accurate on his kick-outs. Just before the break, Jody McDermott missed a clear goal chance.

At the break, Derry brought on Calum Downey and went man to man. As the half went on, they held their discipline against an Orchard side that picked up eight yellow cards and Higgins' proved the difference in the end.

Elsewhere, preliminary round winners Monaghan were 2-17 to 0-8 victors over Antrim in Belfast. They will face Fermanagh, after their 0-10 to 1-4 win over Down.

The semi-finals are fixed for the weekend of January 2/3, with the decider down for the following weekend.