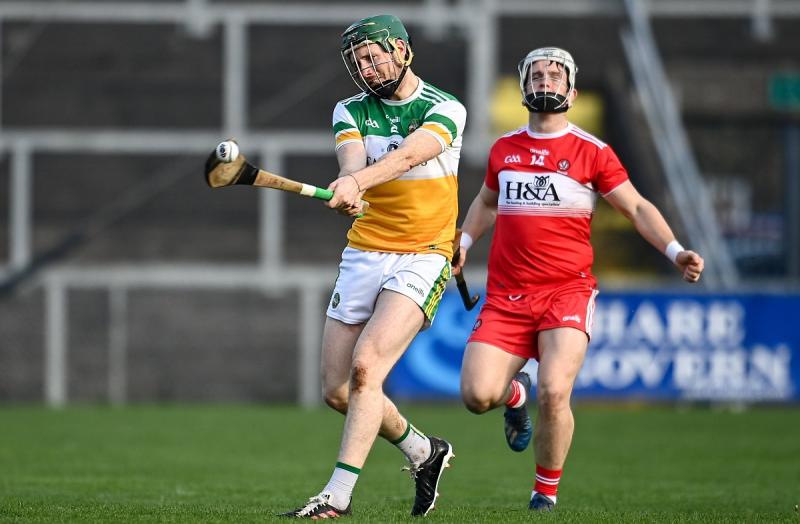 CHRISTY RING CUP ROUND 2B

Michael Fennelly's side, with 0-17 from ace midfielder Eoghan Cahill, continued to make hay following the 43rd minute red card for John Mullan, who was deemed to have struck with the hurl by referee Colum Cunning.

It was a harsh call in a game played in the right spirit and it was at a time when Derry were coming back into the game.

John McEvoy opted to play Richie Mullan as a sweeper, but it left Derry short in attack and any time Seán Kelly went long on his puck-outs or if the ball was played into attack, it was met by an Offaly jersey.

The Faithful county were 0-7 to 0-1 up after 11 minutes, a margin Derry edged back to five by the first water break.

Derry were relying on frees from Cormac O'Doherty, who also missed three in the opening half.  It was only Fintan Bradley who scored from play.

Bradley won a close-range free that O'Doherty drove low and saw saved by Stephen Corcoran who was making his championship debut in goals for Offaly.

Derry trailed 0-16 to 0-6 at the break, but changed their tactics.  Jerome McGuigan came in at full forward, Seán Ó Caiside went to centre back and Derry abandoned their sweeper, with Richie Mullan pushing up beside McGuigan and O'Doherty.

Then they got a massive boost.  Goalkeeper Seán Kelly, who later made a fantastic save to deny David Nally, dropped a shot in around the house and after O'Doherty's shot was cleared from danger Richie Mullan shot to the net.

With the margin now 0-18 to 1-9 and Derry having an extra spring in their step, they were poised to have a cut at Offaly when John Mullan was dismissed

After that, it was an uphill battle as Fennelly's side, with their extra man in defence, was never going to surrender the lead and they ran out comfortable winners.