Opinion: What a new-look Derry senior championship could look like with divisional teams

Some mouthwatering ties in the world of make-believe 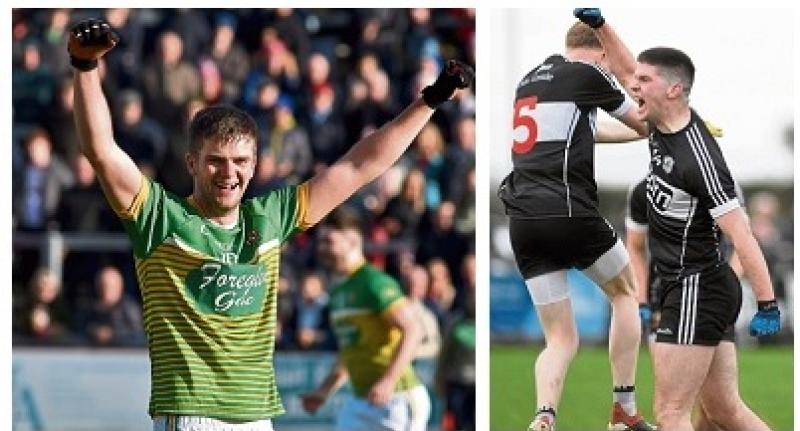 Conor Kelly and Eoghan Duffy could come up against each other in a new-look Derry SFC (Pics: Mary K Burke)

This is not to be confused with Derry CCC's recent 'Return to Play' plan. This is different.

Last week's edition of this column made two 'proposals' for a new-look Derry senior football championship.

Both were based around the inclusion of divisional teams and in part two, we put some flesh on the bones.

The thought process is the poor return of players from the intermediate and junior grades coming through to the Derry senior football team in the last decade.

Of 130 players used in league and championship, by five different managers, none hail from junior clubs and 15 from intermediate, one less than Ballinderry's club total.

Also, the decade saw Coleraine, Slaughtneil and Ballinderry dominate the competition. It's great for the clubs in question, but in a bid to help raise the quality overall. A county team needs more options.

In Sideline View's proposal, 13 senior clubs have been selected on the basis of the last five years of the senior championship. The 11 teams who reached at least one semi-final were joined by Swatragh (third) and Dungiven (ninth) as the highest placed teams in the 2019 league standings.

The other three teams are divisional teams picked from the rest of the clubs. Foyle Oaks (City clubs, plus Slaughtmanus, Claudy and Faughanvale), North Derry and South Derry.

Logistically it will be difficult to fit in around hurling. So in a case where Tiarnán McHugh is trying to balance North Derry, Drumsurn and Kevin Lynch's, it will be far from ideal. A balance will be needed and proper dialogue between all three managers, with the player's training regime at the heart of it.

The senior championship will need to be played off over different weekends to intermediate and junior. This would be a stumbling block as it stands, with so much tied up in the leagues.

Under this new concept, leagues would be totally different from championship. Leagues of 12 with a two up/two down relegation, would be devised with one thing in mind – getting as many games as possible. The CCC would allocate rounds on the weekends the NFL is on.

Club games are on Friday or Saturday night, with the county taking place on Sunday. The county manager names his starting 15 and anyone outside of that, who didn't see any 'meaningful' game time in previous round, is eligible for club football. It would need checked with the county physio, but if a player is going to be of any benefit, they need competition in the legs.

The advantage is having more games on a more regular basis, with more room to balance the club championship commitments. It would help avoid loggerheads at a time of year when it really matters, it would help get rid of the alarming drop-off rate from players being caught between two stools. A situation where nobody wins and in the case of Derry, it leaves a situation that stifles any continuity.

It has some mouthwatering ties. North Derry's clash with a Dungiven side clambering their way back from their decline is the tie of the round, with the late Sunday night billing at Owenbeg.

The appointment of former Dungiven manager Michael O'Kane and Darren McShane as managers of North Derry will add a bit of spice along the sideline.

South Derry's debut in the championship see them up against a ravenous Slaughtneil, who have aim to win back the John McLaughlin Cup after a two year absence and have the astute Paul Bradley at the helm.

In the opposition dugout is Ronan Rocks who will know the intermediate scene well and has an handle on the up and coming minor talent from his time with Derry U17s. He is joined in the South Derry management team by Hugh Mulholland, who never misses a club championship game and will know Slaughtneil inside out.

Foyle Oaks, under the management of Michael McLaughlin and Joe Gray, come up against Loup, with Paddy Bradley in his first season in charge. Lavey and Coleraine renew their 2018 final rivalries.

There is a glance at what the divisional teams could look like.

At the end of the season, two from the first teams eliminated will meet in a play-off to stay in the senior championship.

From the last five years, form will be assessed for wins, draws and defeats, as well as scoring totals to pick the two lowest performing teams, who will play in a relegation play-off.

The loser will drop to intermediate, with the intermediate winners promoted to the senior grade.

RELATED
- Derry have used 15 players outside the senior grade in NFL and football championship in 10 seasons.  More...