SIDELINE VIEW: An alternative view of the race for John 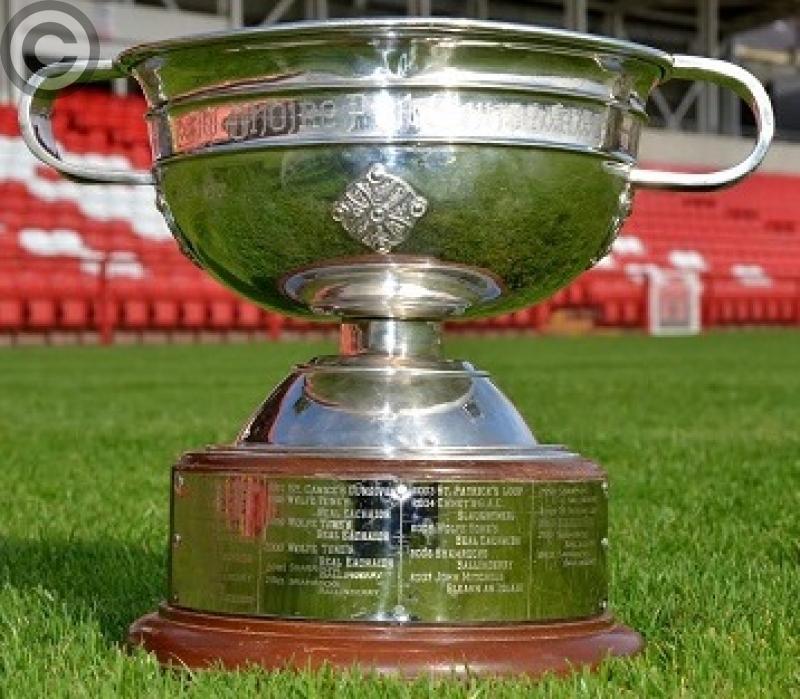 I would better sign a disclaimer before I go any further. Shaking up the Derry senior championship isn't an exact science.

However, after the recent figures indicating the lack of players not coming through to senior inter-county level, I thought I would get a pen and copious amounts of paper out, to devise a divisional element to the county's golden goose – the race for the John McLaughlin Cup.

I have often penned on these pages how difficult a job the CCC have and especially in a dual county. Now I am going to rip up the championship and start afresh.

This week, the format of any championship that will take place this year will be up for debate. The group stages are going to be pondered over to get club players more games.

My study is one for the 2021 season and on the basis that this year never happened. All the facts and figures come from last season and the years before.

I remember trying to chat with an Austin Stacks’ supporter one night in Portlaoise's Maldron Hotel about the ins and outs of the Kerry championship.

At the end of the day, if the standard of football is to improve, then we need to get more of it.

It was the wee small hours of the night, Slaughtneil's clash with Kieran Donaghy's side was getting closer.

It wasn't the few pints we were hovering over that caused the confusion, it was just a difficult thing to decipher.

For Derry's version, I am stripping away any connection between league and championship. That's the first point, in the hope that over the next decade, the league can continue regardless of county games. At the end of the day, if the standard of football is to improve, then we need to get more of it.

For Plan A, I am basing the Derry SFC on having 13 senior club teams and three divisional teams.

For the 13 senior clubs I have selected on the basis of looking back at the last five years of the championship. Slaughtneil, Coleraine and Magherafelt are in there, as previous winners.

Add in Loup, Ballinascreen, Glen and Lavey as teams who have contested finals. Bellaghy, Ballinderry, Greenlough and Banagher make the cut, having reached at least a semi-final.

To get the tally up to 13, I have tapped into the 2019 league placings. Swatragh, in third place, make the cut and the next highest ranked team, in 9th place, is Dungiven.

The rest of the clubs will ply their trade in the intermediate and junior championships.

This is where things change. A few people told me I was crazy to start delving into this, but so is standing still and not exploring. But sure, without the draw of any live action, it's an interesting delve.

The natural break in the three divisional teams would be north and south Derry and the city. On the face of it, this won't work.

The city teams just wouldn't be strong enough, so I have renamed it as Foyle and drafted in Claudy, Slaughtmanus and Faughanvale. Players from these clubs would be key players on St Columb's Derry teams and it would leave the following selection.

That would leave North Derry with nine to pick from, including 2007 senior champions Glenullin and Foreglen, the most consistent intermediate side of the last decade, to form the backbone. Add in the likes of Lee Moore, Gary Keane, Tiarnan Woods and goalkeeper Oran Hartin.

So that takes us down past the Ponderosa and over that imaginary boundary between north and south Derry.

Kilrea and Newbridge will form the basis for the South Derry team. The Pearses have been in the senior final in the last decade, with Newbridge having laid a foundation of youth for the future.

Goalkeeper Aaron Cassidy of Ballymaguigan would be a serious addition. The Keenans in Castledawson, Patrick Feeney and Emmet Crozier from Moneymore, not forgetting Eunan McElhennon and Iarlaith Donaghy.

There we go. Easy wasn't it.

On to the small print. The intermediate winners are promoted to the senior championship for the following year. For relegation, the eight teams that don't make the senior quarter-final, their championship form from the last five years is taken into consideration. Wins, draws and score difference all collated. The two lowest performing teams go into a play-off, with the loser getting the chop.

Since the divisional teams won't have any championship history, they will be exempt from relegation for five years to see how it beds in. At that point, the fuller evaluation of the project will have taken place.

The difficult situation will be fitting it all in. So senior games would be played on different weekends. And with dual players needing to be fitted in, Tiarnán McHugh, Paddy Henry, Johnny O'Dwyer and the likes.

With the club leagues being detached, they can start earlier and with more clubs without county players as it won't affect their championship stance.

What happens if South Derry beat Coleraine in the 2021 county final. They won't be able to go into Ulster, so in that case the league winners would advance. Or maybe, the winners of the Larkin and Kerlin Cups play off in a decider as a 'plan B' to pick an alternative county champion.

While I was at it. I picked a much more radical plan B, that would see eight senior teams and eight divisional teams, like in Kerry. Just to prove I was listening that night in the Maldron.

And, from looking at the 2019 league pairings, intermediate and junior would be as follows.

Jumping clean off the page is the likes of Bellaghy, 21 times senior winners and Swatragh, third in the league last year, playing at intermediate level.

The sticking point would be the loss of senior status by some clubs, who would find it very hard to get promoted back to senior level.

Relegation, promotion and qualification for Ulster would follow the same pattern and have the same obstacles as plan A.

It's hard to see this one ever getting the time of day, but sure it gives the Sideline View's version of the CCC something to compare.

Both are different, both will be hard to sell, but wouldn't it be great to get some proper dialogue on something to widen the base of players for a strategic plan at inter-county level.

NEXT WEEK: We will reveal the various team selections from Sideline View's preferred Plan A option and how a possible championship draw could pan out.