Glack lead the way after a first championship title since 1981 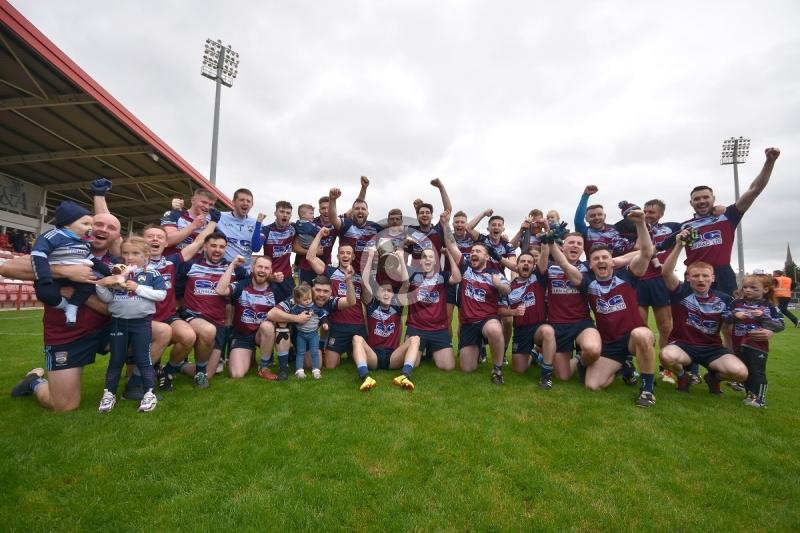 After years of early season hope petering off into a summer of nothing, Glack won their first championship title since 1981.

The new league structure saw them test themselves against a handful of 'intermediate' sides which set them up for a tilt at a championship.

In truth they never looked tested until Drum's comeback in the final but Glack's greater fitness levels saw them push on.

Drum had a difficult season but after coming close to folding, they dusted themselves down for a rattle at the championship.
They found the going tough against Sean Dolan's and almost came a cropper against Doire Colmcille but they deserve a lot of credit for getting themselves back to the force they once were.

1 - JM McLaughlin
(Glack)
The O'Connor's didn't concede a championship goal until the final. A huge part of that was the stability they gained from James Martin McLaughlin's presence behind his defence. He gave them confidence, kicked with conviction, his handling was impeccable and he could do little to stop Rory O'Reilly's goal in the decider.
[1st All-Star]

2 - Seamus O'Kane
(Drum)
O'Kane was more than the average corner-back. He was tigerish in the tackle and in the final, despite giving away height to Aaron Moore, he limited the Glack man's influence.
On top of that, he scored 0-8 in four games, including four points - including two in the closing minutes - to save them from a shock defeat against Doire Colmcille.
[1st All-Star]

3 - Ryan O'Kane
(Glack)
Was very much the fixer in Glack's defence. The number on his jersey was irrelevant. He was tasked with blotting out danger. In the semi-final, he won two vital possessions intended for their danger-man Patrick Feeney.
In the final, he picked up Niall Ferris and kept him quiet until the Drum man went on a roving role to save the game.
[1st All-Star]

4 - Jimmy O'Connor
(Glack)
Jimmy picked up his first award in 2008 and continues to deliver.
Glack's play anywhere player was key to all that they were about. A superb block to deny Gary Fisher in their win over Dolan's demonstrated his defence nuance but his first-half display in the final was out of the top drawer. His engine allowed him to get forward to kick two points and he played a central part in Cormac Boyle's point.
[4th All-Star]

5 - Niall Ferris
(Drum)
After picking up a hurling award, he is selected for the fourth time in the football number five jersey. He missed the opening game with Dolan's but landed three points in their great escape against Doire Colmcille. His use of the ball in the middle third was a hallmark of Drum's semi-final win over Magilligan. Wasn't effective in the final until he pulled deep to help his side's comeback.
[4th All-Star]

6 - Niall Burke
(Drum)
A first selection since 2009 for the Drum defender.
In the semi-final win over Magilligan, he had the courage to spray passes from defence in difficult conditions. When Drum were struggling for scores early in the final, he passed to Kevin O'Reilly for a point. In the second-half his work-rate dragged Drum back into contention.
[3rd All-Star]

7 - Ryan Morgan
(Glack)
It's Morgie's fourth selection but a first in a defensive slot.
Glack's new management team deployed him at wing back and it gave them an extra attacking dimension.
Missed the early rounds of the championship but he was the key to unlocking Moneymore early on. In the final, he scored twice but was the springboard for Glack's counter-attack, linking well with Jimmy O'Connor.
[4th All-Star]

8 - Martin McGonigle
(Glack)
After being selected as a minor in 2015 All-Star line-up, he is now the heartbeat of Glack's midfield.
The former county minor player's endless running saw him destroy both Doire Colmcille in the first round and Moneymore in the semi-final.
Enjoyed a tough battle with Shane Millar in the final but still got forward to play a part in two Glack scores. ~
[2nd All-Star]

9 - Eddie McLaughlin
(Glack)
The long-serving midfielder just edges out his colleague Ciaran Carmichael for the spot.
Listed at midfield but his defensive instincts saw him drift between centre-back and the important holding role, with McGonigle bombing forward.
It was his defence-splitting pass that set-up Niall McGowan's killer goal to put Glack 10 points clear in the final.
[2nd All-Star]

10 - Cormac Boyle
(Glack)
In a new role this season, Boyle played much of the season as a ball-winner at wing-forward, where he worked unselfishly for the team.
He chipped in with 0-3, including a point to cap a man of the match performance in the final, when he dominated kick-outs.His absence was felt when injury ruled him out of the Rock game.
[2nd All-Star]

11 - Niall McGowan - JUNIOR PLAYER OF THE YEAR
(Glack)
'McGoo' scored 2-22 across Glack's club championship games, led by example and was the fulcrum of their devastating attacking game.
He played between full-forward and as a link man as the O'Connor's eased their way to the a first title since 1981.
In the final he finished his goal with precision and kicked a wonder point from a sideline to cap it all off.
[3rd All-Star]

12 - Collie Mullan
(Magilligan)
He started the championship at corner-back against Moneymore and one of his passes from defence put Magilligan through for their opening point.
It was when Leo Sweeney moved him into attack that he began to blossom.
After scoring 1-3 against Ardmore, he gave Drum plenty to think about in the semi-final and had what looked to be a late point ruled out with the game in the melting pot.
[1st All-Star]

13 - Odhrán McKane
(Sean Dolan's)
One of the most exciting players in this year's campaign was the Dolan's inside forward.
He tortured Drum in the first-half, scoring every time he got on the ball. The following week, he scored 0-7 against eventual winners Glack.
His athleticism and accuracy made him a match for anyone.
[1st All-Star]

14 - Kevin O'Reilly
(Drum)
A second award after being named at full-back in the 2011 selection.
He landed 0-12 as Drum progressed to the final and his long ball almost opened the door for a James McCartney goal against Magilligan in the semi-final. But it was his awareness and use of the ball that made him invaluable. His six points against Doire Colmcille were invaluable and in the final he pulled deep late on, trying to engineer a comeback.
[2nd All-Star]

15 - Patrick Feeney
(Moneymore)
In what was a testing season for Moneymore, Feeney was the ray of light in their attack.
With blistering pace and varied runs, he totted up a score of 1-15 (of which 1-14 came from play) as Moneymore qualified for the semi-finals.
He found the going tougher as Glack shut out the supply but he still managed to get on the score-sheet
[2nd All-Star]