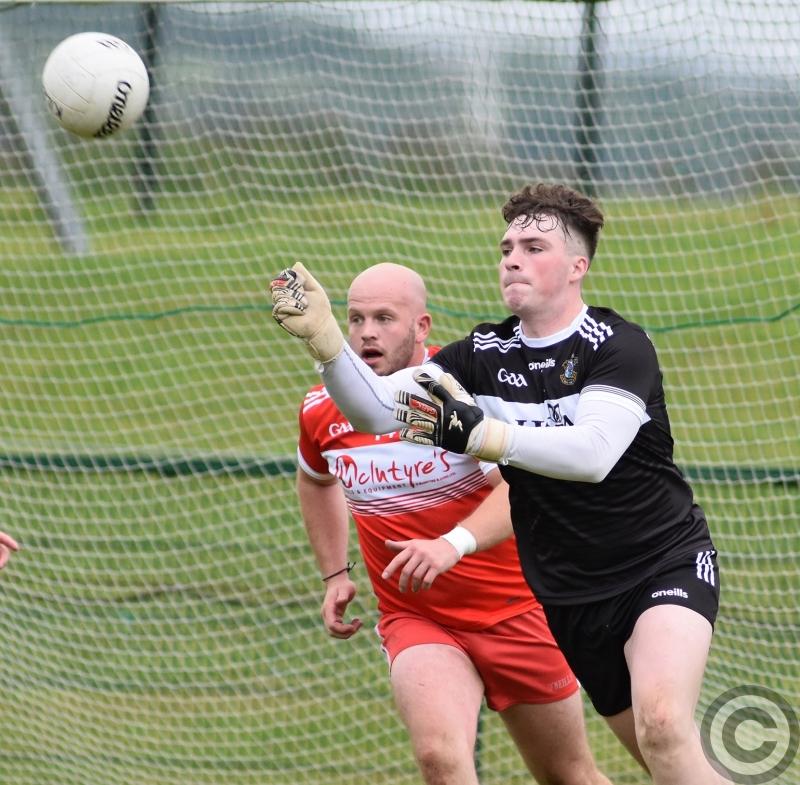 There was controversy in the final seconds when Feargal Higgins looked to have grabbed victory for Dungiven.

His kick, which appeared to curl inside the post, was ruled out.After the final whistle there were unsavoury scenes, lasting a minute, involving players and subs from both teams.

Once order was restored, management and officials from both clubs entered discussions with referee Gavin Hegarty and a decision not to play extra-time was agreed.

The game was played in incessant rain and both teams deserve credit for their endeavour over the hour.
Ballinascreen played with Reece McSorley as a sweeper.  Dungiven counteracted by putting Odhrán McKeever on Noel Rafferty, leaving Sean McKeever free at the other end.Early points from Pauric McNicholl, Feargal and Cahir Higgins had Dungiven 0-3 to 0-0 ahead after seven minutes.

A run from midfield by Marty Bradley split the Dungiven defence, before Jon Paul Devlin slotted ‘Screen’s first score of the game.

When Conal Logan turned over possession in the face of Dungiven’s defensive wall, Sean McKeever broke at pace, leading to a second point for Cahir Higgins.

An outside of the boot Niall Doyle point gave ‘Screen some brief respite but Fergal and Cahir Higgins, the latter from a free, opened a four point lead.

Odhrán and Daire McKeever combined for Sean to surge forward and open a 0-7 to 0-2 lead after 25 minutes.

Just when they were threatening to fade out of the game, Ballinascreen found the net.  Caoilte McAlinden had the bravery to flick over the final Dungiven defender and when he rushed on the loose ball, he had the composure to slot an inch-perfect shot across ‘keeper Hasson to the far corner of the net.

Marty Bradley added a fisted point after a Ronan McKenna run from deep but it was Dungiven who finished stronger.  Hasson’s short kick-out found Eoin McKeever, who built a move up the right wing before Daire slotted between the posts.Feargal Higgins passed to and took a return pass from Conor Kelly to kick between the posts, putting them 0-9 to 1-3 ahead at the break.

The third quarter became a non-event, with a series of failed attacks as both teams carried possession into the tackle.
In the 43rd minute Aaron McBride began a move up-field that led to Emmet Duggan being dragged to the ground by Sean McKeever.

No card was brandished but when Devlin’s penalty hit the bar, he pounced on the rebound to force over the line and level the game.

Darragh McGilligan began to come into the game and he started a move that led to a Conor Kelly score from the wing, after Cahir and Feargal Higgins both kept their composure.   McGilligan doubled Dungiven’s lead but Michael O’Kane’s men played second fiddle for the rest of the game.

With seven minutes to go, Cathal Donnelly turned over a move from the Dungiven defence before being dragged to the ground by Thomas McClarey but astonishingly no black card was shown, with Donnelly correctly later seeing black for a cynical foul.Devlin tapped over the free and with Ballinascreen in control, a draw looked a likely outcome.

Goalkeeper Ryan Scullion scuffed a 56th shot to the left of the posts but made up for it with pressure kick in injury time to draw the game.

Dungiven will have to plan without Conor Kelly for the replay, after he was dismissed on a straight red card, late in the game.

Quigg to the rescue for Kilrea

There was also a stalemate in the other semi-final, when Paddy Quigg rescued Kilrea with a late free to draw with Glen in Loup.

Three seasons ago, Kilrea went all the way to an Ulster Final at St Paul’s only to be beaten by Burren at St Paul’s.

There was torrential rain from start to finish but Quigg opened the scoring with a goal after linking up with Daithi McLaughlin to beat ‘keeper Caolan Convery at the near post.

It was point for point for the rest of the half.  Quigg, Gearoid and Daithi McLaughlin were on target for the Pearses.  Alex Doherty (3), Conleth McGuckin and Eunan Mulholland were the Glen scorers but they trailed 1-3 to 0-5 at the break.

In horrendous conditions, the second-half, it took 25 minutes for first score of the half from Paddy Quigg. Glen got a penalty in the 59th minute and Alex Doherty converted to put them a point up and Quigg equalised from a free with the last kick.

Harry O'Kane Cup U21 B Semi-Finals
With 0-10 from the O’Kane brothers – Paddy and Cathal – as well as goals from Martin McGonigle and Kyle McGuinness, the ‘Vale were comfortable winners (2-12 to 2-2) over Claudy at Celtic Park.
They will face Glenullin in the final after their 3-11 to 2-11 win over Craigbane in Ballerin.