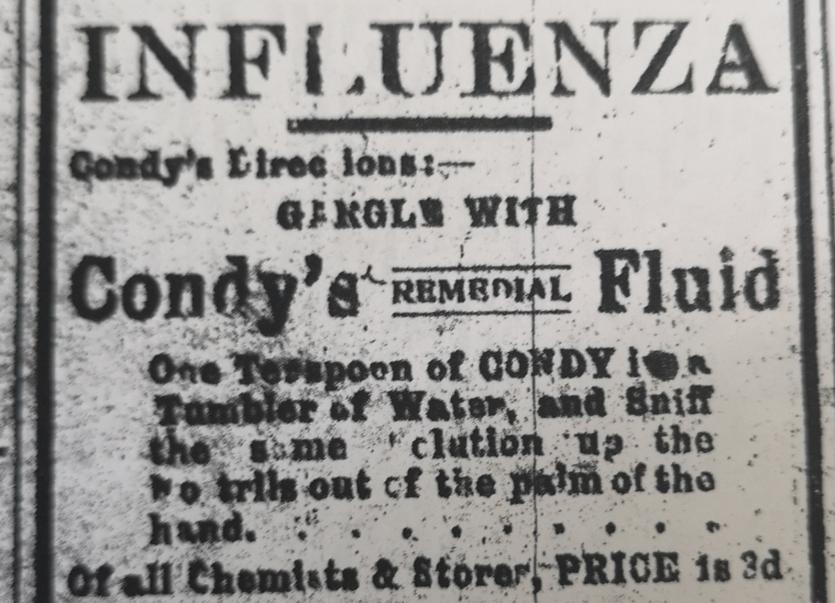 As 1918 began to draw to a close, the world lay in a state of flux. The signing of the Armistice in November had just brought an end to the hostilities of the First World War.

Newspaper column inches were dedicated to tales of returning soldiers, and eventually gave way to accounts of jubilant celebrations prompted by the war's end.

The mass movement of people, however, would hasten the spread of the so-called Spanish Flu, an influenza epidemic that killed an estimated 50 million people worldwide.

Records show 20,057 people died from the virus in Ireland, with historians speculating the total may have been higher still.

As in 2020, there is cause for speculation that the strain of influenza that caused the pandemic may have been present before it reached epidemic levels. 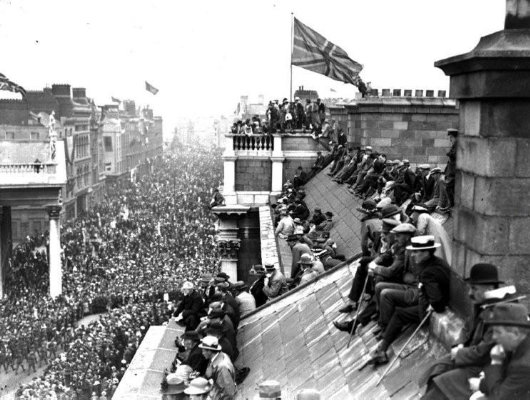 Victory parades held in the aftermath of the First World War helped spread the influenza.

On July 13, 1918, the Coleraine Chronicle carried an obituary for Mr Jack Lynd, who had been on holiday in Sheffield, England at the time.

“Many friends in Coleraine learned with feelings of painful surprise and sorrow that Mr John Craig Lynd had passed away in Sheffield after only two days' illness,” it read.

“He had been spending a week's holidays in Sheffield; and on Friday last was suddenly seized with influenza.”

It wasn't until the autumn, and after the conclusion of the First World War, that reports of influenza began to feature more regularly in the local newspapers.

Demand for hand sanitiser and face coverings rocketed at the beginning of the coronavirus pandemic, and in 1918, it didn't take long for advertisers to take advantage of a similar clamour.

An advert for 'Condy's Remedial Fluid' was first on the scene, appearing in the Mid Ulster Mail on November 16 1918, proclaiming to aid with the 'prevention and cure of influenza'. 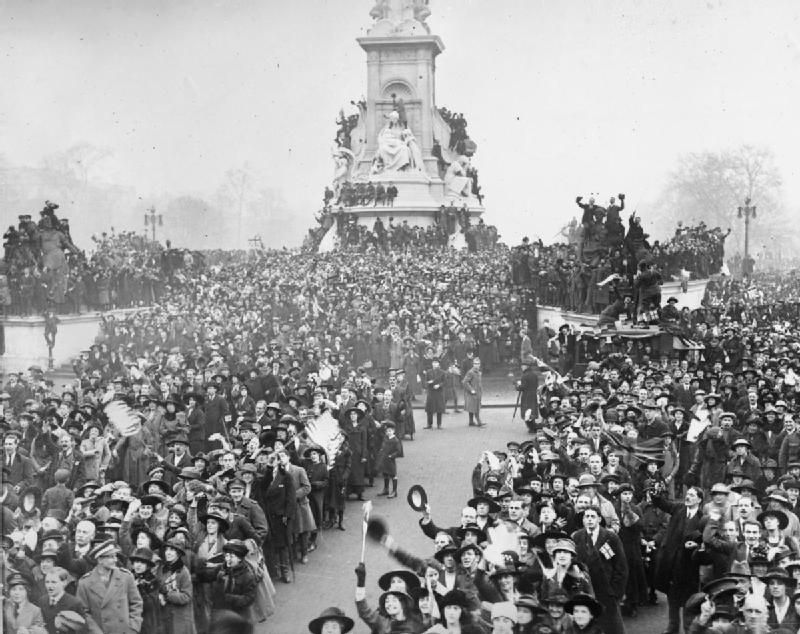 Crowds outside Buckingham Palace celebrating the end of the war.

The following week, on November 23, the paper carried reports of outbreaks in Maghera, Magherafelt and Upperlands.

Schools in Maghera and Magherafelt closed for a fortnight, while a report to the Magherafelt Rural Council described the epidemic as 'severe'.

“Dr McIvor reported to Magherafelt Rural Council on Thursday that the influenza epidemic was very severe there,” read the Mid Ulster Mail.

“A Committee was appointed to meet all the dispensary doctors next Thursday and consult as to how the epidemic can be best dealt with.”

“The influenza epidemic has reached alarming proportions, and at present time whole districts are completely laid prostrate with it,” it said.

A lengthy Mid Ulster Mail report on the same date gave details of the epidemic in Cookstown, County Tyrone, where the effect of the disease on rural areas was starkly laid out.

“The needs of some of the country cases were so urgent that she [district nurse] was sent to render aid,” it said.

“One family was reported as being ill, and when she arrived she found the mother dead and four little children (one a baby of a few months old) the only occupants of the house, the father being at work in Glasgow.” 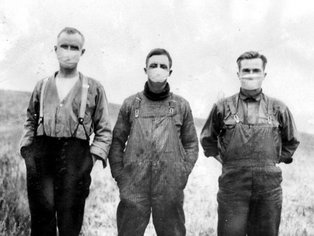 Face coverings were a feature of both pandemics.

Reports continued on November 30, with the Mid Ulster Mail carrying news of nine funerals in Maghera as the epidemic 'shows no signs of abating'.

On the same date, the Coleraine Chronicle detailed the effects the virus was having in the seaside town of Portstewart.

“The influenza epidemic is so prevalent in the district that the National Schools have been closed for another fortnight; while performances at the Picture House have been temporarily suspended,” it said.

At a meeting of the School Attendance Committee the following week, a decision was taken to close all schools in Portstewart until the New Year.

Meanwhile, on December 7, the Mid Ulster Mail reported the embroidery factory in Maghera had reopened, but that the epidemic continued in the town.

“In the outlying districts the epidemic is even worse and numerous deaths have occurred. It is stated that one day last week no less than seven funerals were at one graveyard in the district,” it said. 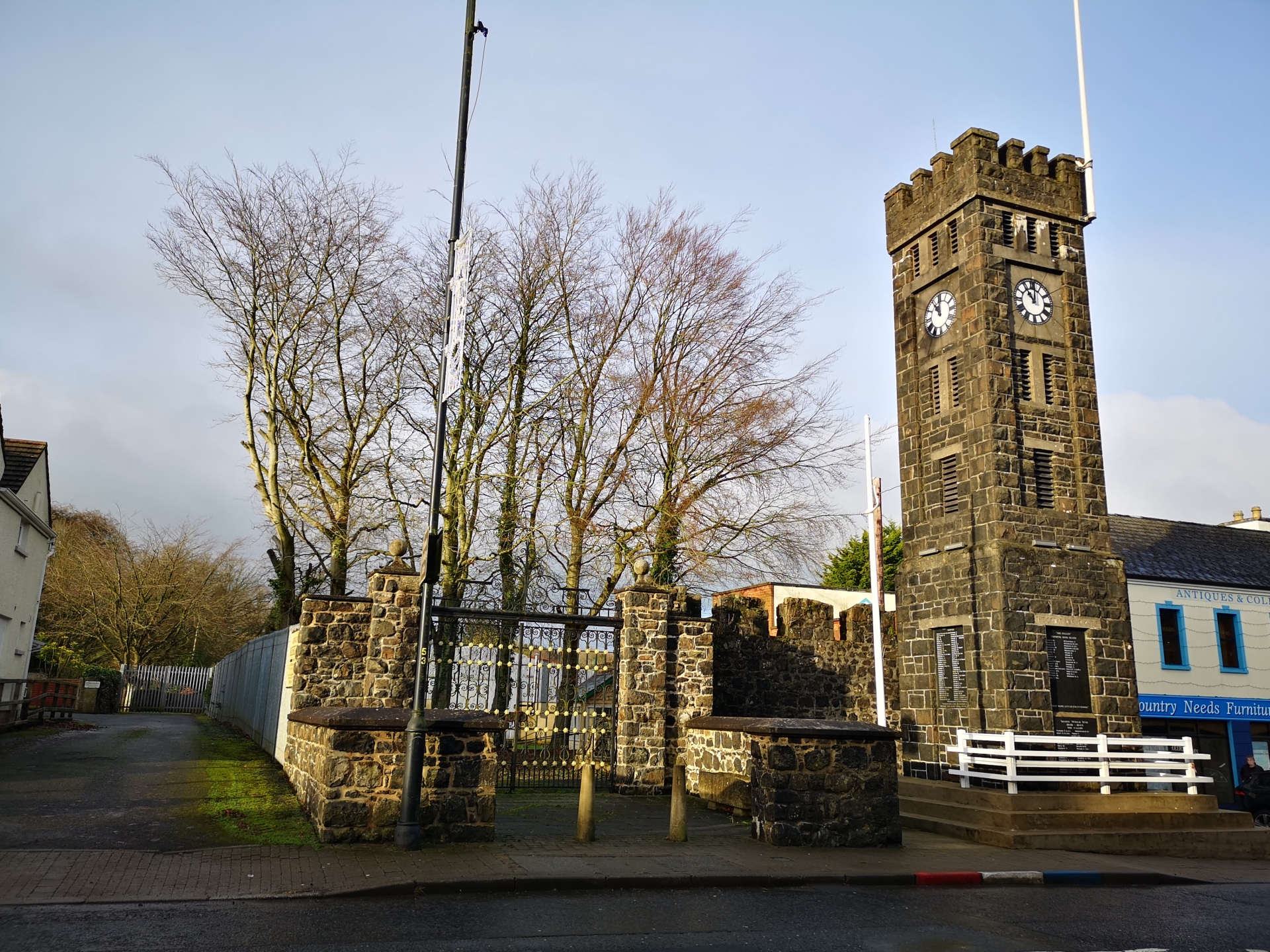 Garvagh war memorial, for which funds were being raised around the time of the influenza pandemic.

Deaths from influenza in Dungiven and Limavady were noted in the Chronicle on December 14, while two weeks later, on December 28, a lockdown of sorts was announced in Moneymore.

“Owing to the influenza epidemic, and the consequent recommendation of the doctors that the gathering together of numbers of people should be discouraged for some time, the variety entertainment which the local Work Guild intended should take place shortly before Christmas in aid of patriotic objects, has been postponed until early next year,” it read.

Then, with the turn of the year, reports suddenly became more sparse. The Coleraine Chronicle edition of January 4 1919 even reported improvements in Upperlands.

“It is gratifying to learn that the influenza epidemic has almost subsided in the district,” it said.

“Schools have reopened; and further deaths from the disease have not been recorded during the past fortnight.”

However, as in 2021, recurrences and local surges of the virus appeared as a reminder that it hadn't quite gone away yet.

The Chronicle carried a report of the disease's resurgence in Coleraine on January 18, with an account of a mother and daughter being laid to rest in the town.

“There has been an alarming recurrence of the influenza epidemic in Coleraine within the past fortnight,” it said.

“Numerous cases have been reported, and on Wednesday afternoon the pathetic spectacle of a mother and daughter being interred at the same time was witnessed in Killowen Parish Churchyard.

“The epidemic is worse in Killowen than in any other part of the town. During previous periods when the disease was very prevalent elsewhere, Coleraine had comparatively mild visitation.

“The great majority of the cases, although requiring careful attention, were what might be termed 'slight'.

“This latest visitation is said to be in a much more virulent form,” it added, a forbearer to the new strains of Covid-19 that are currently causing surges in cases locally. 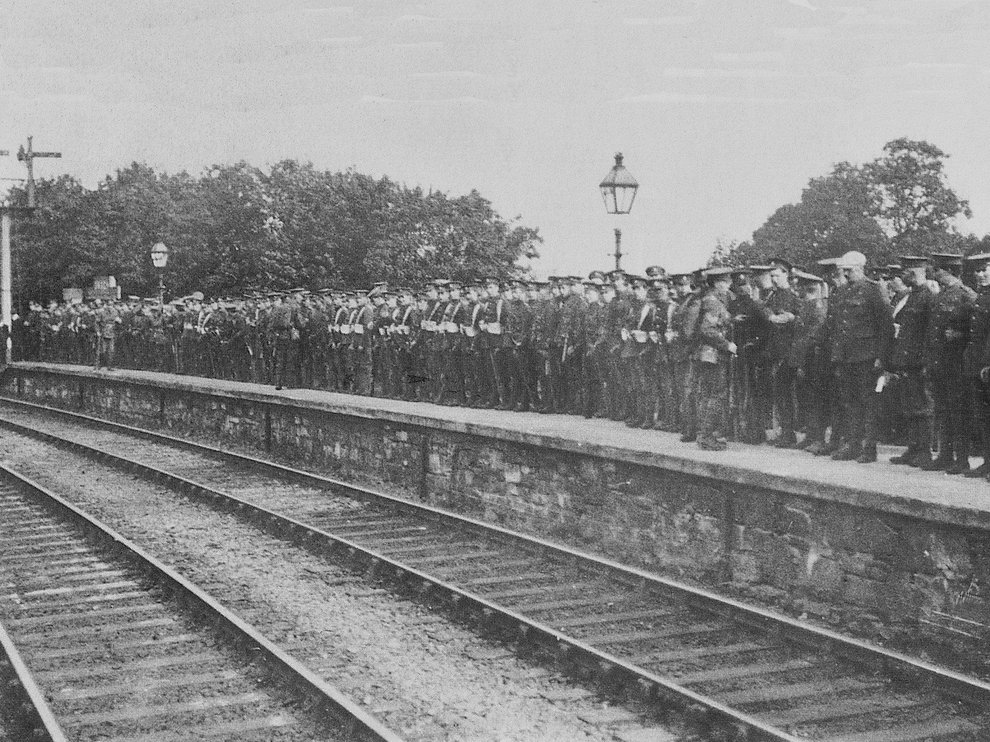 Soldiers waiting for a train in Omagh, County Tyrone.

The Mid Ulster Mail of March 1 reported a further outbreak of influenza in Upperlands, but detailed one worrying difference.

“Unlike the outbreak of November last, most of those affected are little ones,” it said.

“A serious aspect of the outbreak is that the cases are very numerous where lung trouble has been contracted.

“Only one death has occurred – a little girl aged 11 years, whose death took place with startling suddenness after about a day's illness.”

On the same date, the Mail carried official advice on the recurrence of the disease; advice that will be very familiar to anyone living in 2020-21.

“Avoid all crowded gatherings. Secure good ventilation and cleanliness in homes, not forgetting the sleeping apartments,” it said.

“All rooms used as workshops, factories etc should be sprayed morning and afternoon with dilution of Jeyes' Fluid or other disinfectant.

“When a person has totally sickened they should be isolated at once. When coughing or sneezing the mouth and nose should be covered with a handkerchief.”

During Spring 1919, reports of outbreaks gradually began to peter out, with just a few lines in the Mid Ulster Mail of April 5 carrying mentions of influenza 'still lingering' in Upperlands and Moneymore.

As in the current circumstances, normality bubbled away under the surface throughout the 1918-19 pandemic. The dances marking the end of the war, the local political institutions, the courts.

2020-21 appears to have echoed that gradual residing of fear and worry. The relative normality of the recent Twelfth celebrations and the holiday season have illustrated this well. 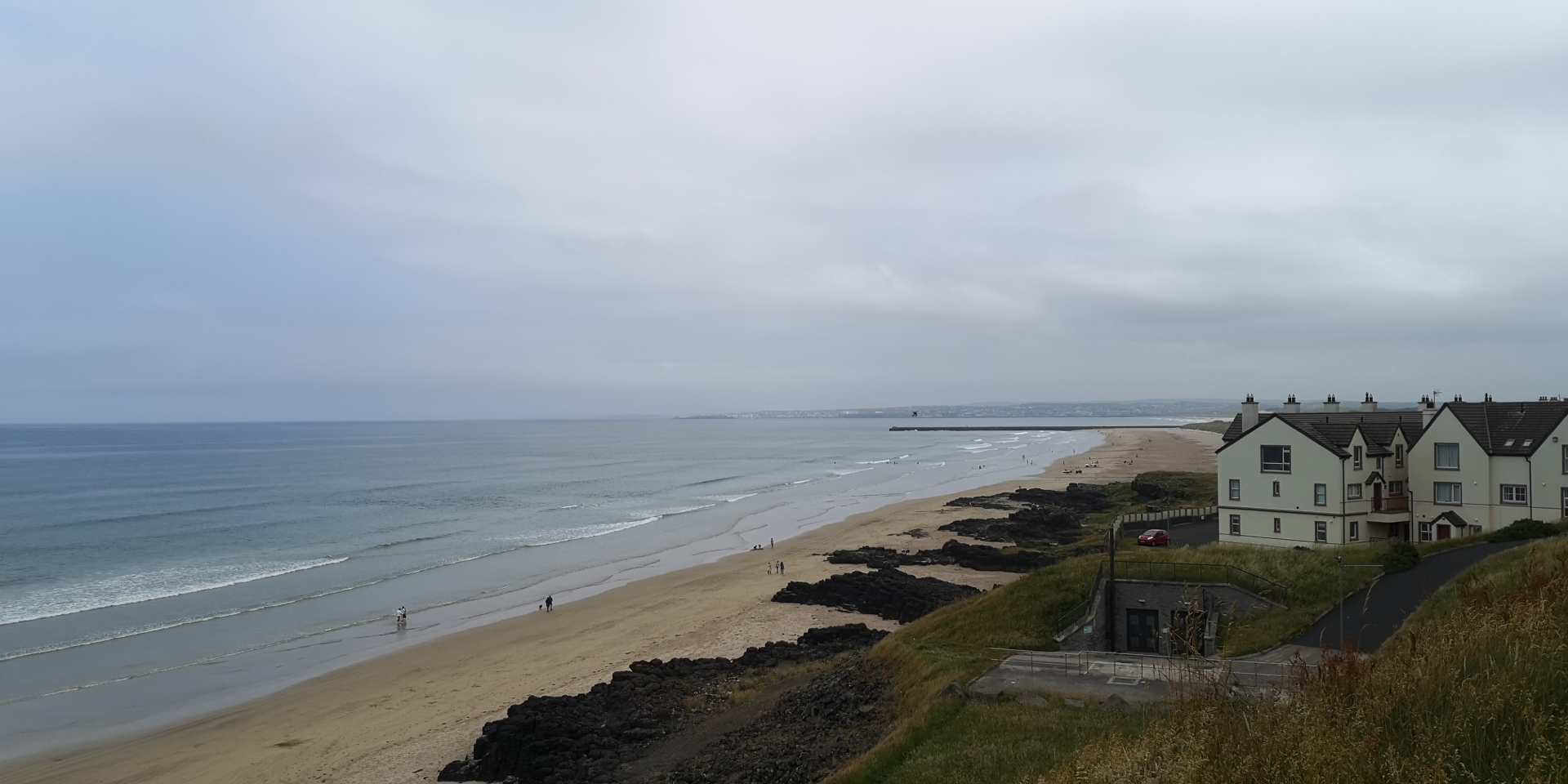 People have been heading for the beaches with increasing frequency in recent months.

People are holidaying, marching and continuing on with life largely as they always have. Like the Spring of 1919, there are local outbreaks, but there is one major difference. 2021 has a vaccine.

Its continued roll-out will surely see that return to normality accelerated, and as life moves on, references to the 1918-19 pandemic will gradually become less frequent.

Future historians will no doubt pore over records the past 18 months for lessons learned in years to come.