Three generations of the Derry family were lost in a matter of minutes. 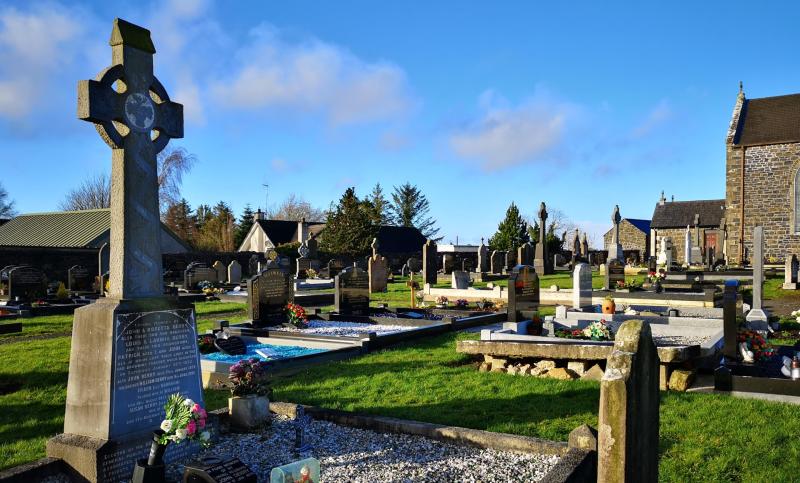 On the anniversary of a tragedy which is hard to comprehend, Liam Tunney looks back at the heartbreaking day which devastated a local community.

Saturday afternoon. In the winter sun, Manor House in Kilrea casts its long shadow on the 18th green.

The latest round of Covid-19 restrictions has forced the golfers indoors, and only birdsong travels on the breeze from its bunkers and fairways.

Inflatables from the recently-built water park have been packed away for the winter, and only a scatter of outdoor furniture remains on the deck of the restaurant.

There is little in this tranquil vista to suggest it was the scene of unimaginable heartbreak almost 70 years ago. 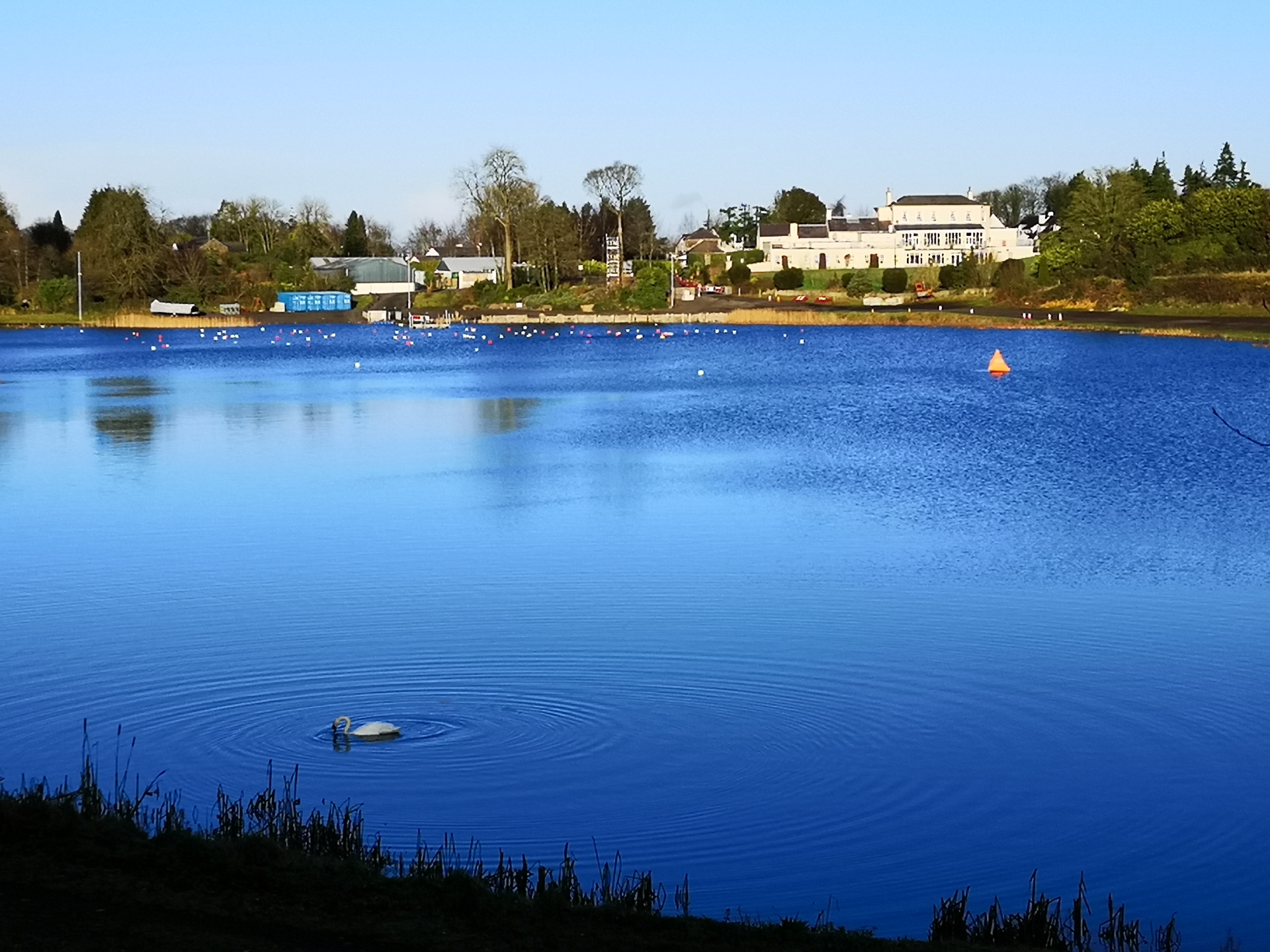 Manor House, which in 1952 was the Convent of Mercy, as it stands today.

As evening took its first breath on January 26, 1952, John Derry was settling down to listen to a football broadcast on the wireless.

Outside, a blanket of snow covered nearby Bridge Street and it lay deep on the hills around the gate house where he lived.

A breathless figure appeared at his door, startling him.

“They're drowning – come to the lake quick!”

Earlier he had seen his children setting off with their sleighs and had warned them to be careful.

“I did not hesitate a moment, but ran away through the snow,” he said in an interview with The Chronicle after the incident.

“I thought I would never get there, the distance to the lake never seemed as long. It was terrible to arrive at the lake and find nobody about.”

John arrived too late to save his children. His parents. His siblings.

Six members of the Derry family from Kilrea perished in a drowning accident that day. Three generations of the family decimated in a matter of minutes.

The terrain around the Convent was hilly, and during winter, overflow from the lake drained into a hollow created by two steep foothills, forming a deep pond.

It would often freeze over, and the nuns at the Convent would have the ice broken and stacked in the nearby 'ice house'. The area became known as the 'ice house field'.

The Derry children – Willie, Patrick and John – were taking advantage of the conditions, sleighing down the hills onto the frozen pond when tragedy struck. The ice cracked.

Five-year-old John, the youngest of the Derry children, toppled through it into the water. His brother Patrick instinctively reached for him, and was pulled in too.

William, around eight yards away, rushed to save his brothers, but was also thrown into the water when the ice collapsed beneath his weight.

Their uncle, Louis, had been preparing to launch his sleigh at the top of the hill. He ran to their aid, but met a similar fate.

There were now four members of the Derry family struggling in freezing water, a thick layer of ice hindering their escape. 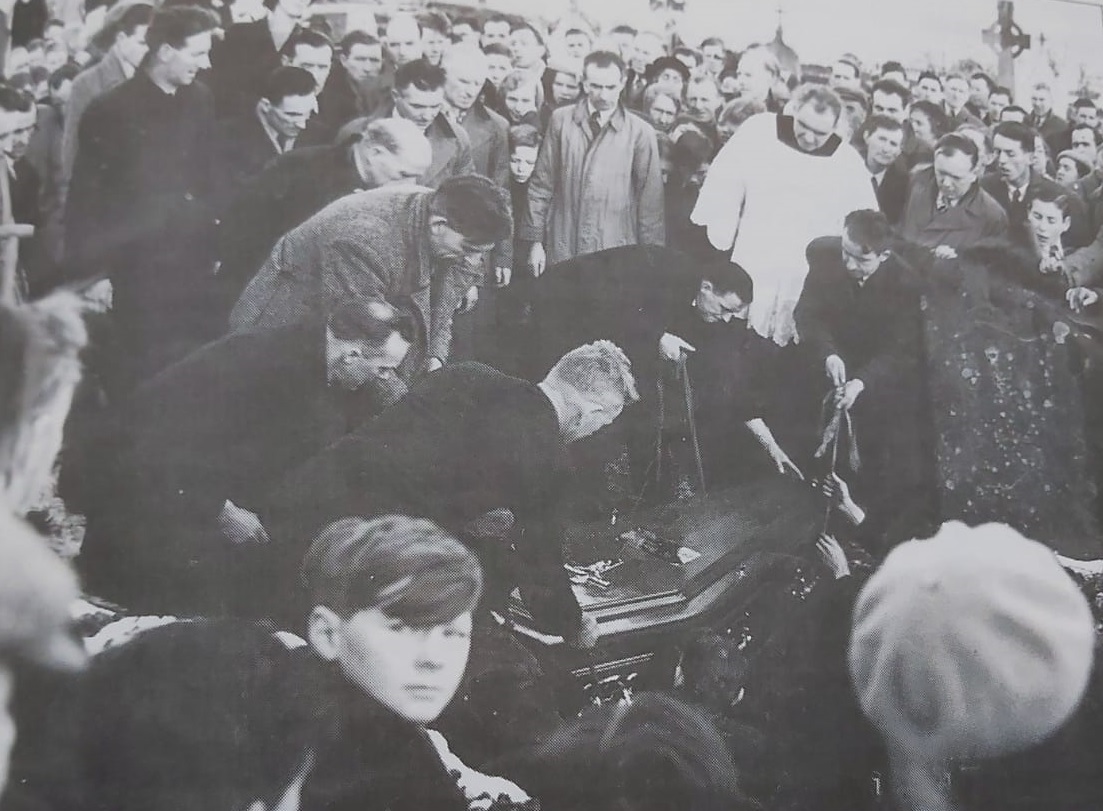 Hundreds thronged the graveyard at St Mary's Church, Drumagarner, for the burial.

Local man Dessie Darragh was 17 at the time. His sister was married into the Derry family and he often noticed the children as he made his way around the town.

“I actually went by them the day before, they were sleighing down and they paid no heed. The water was deep, they were big hollows,” he told the County Derry Post.

“I was down the other road with a gun in the forest. When you were that age and you got a gun, you went out and shot pigeons and rabbits.

“I heard when I was coming walking up the road. Somebody said they were drowning in the lough. I didn't go down. My brothers did, but I didn't want to see that at all – I knew them well.

“It was shocking. Six members of the one family and three generations.”

Only the quick thinking of 12-year-old Eileen McCausland prevented a seventh death that day.

Eileen was making her way down to the pond after attending Catechism class when she heard Willie Derry's desperate screams.

“I went out on the ice and grabbed his hand,” she said in an interview given shortly after the tragedy.

“I pulled him out and then got hold of his Uncle Louis' hand, but he was too heavy, and my feet were slipping on the ice.”

The boys' aunt, Lavinia, was making her way back from the town when she heard the children's cries echoing on the narrow walls of the avenue leading past the gate house.

When she reached the scene, the boys' grandmother and grandfather were also running down the hill to help.

“Willie's aunt, Lavinia, rushed over to me and caught his other hand, and he let mine go,” said Eileen.

“She lost her balance and fell into the pond. Then Mr Derry, Willie's grandfather, and Mrs Derry (his wife) came down to the bank.

Children who had been playing in the vicinity raised the alarm and Sister Monica from the Convent phoned for the police, but it was John Derry senior who was next to arrive at the harrowing scene.

“I saw a sleigh sitting on the edge of the ice. I ran down to where the ice was broken, and before I knew I was in the water too,” he said.

“I saw a hand and pulled. It was my mother. I pulled at her arms to see if there was any life left when I brought her to the shore. I tried everything I could to revive her.

“When I looked around, my father's cap was floating in the water, and I went out again to see if I could find him. The ice broke and I was thrown into the water.

“Fortunately, when I came up the third time, my chin rested on the ice, which was two inches thick, and I was able to get a hold and drag myself on to the bank.

“Charlie McCausland heard me shouting and he came and helped me. I did not see either of my two children in the water.” 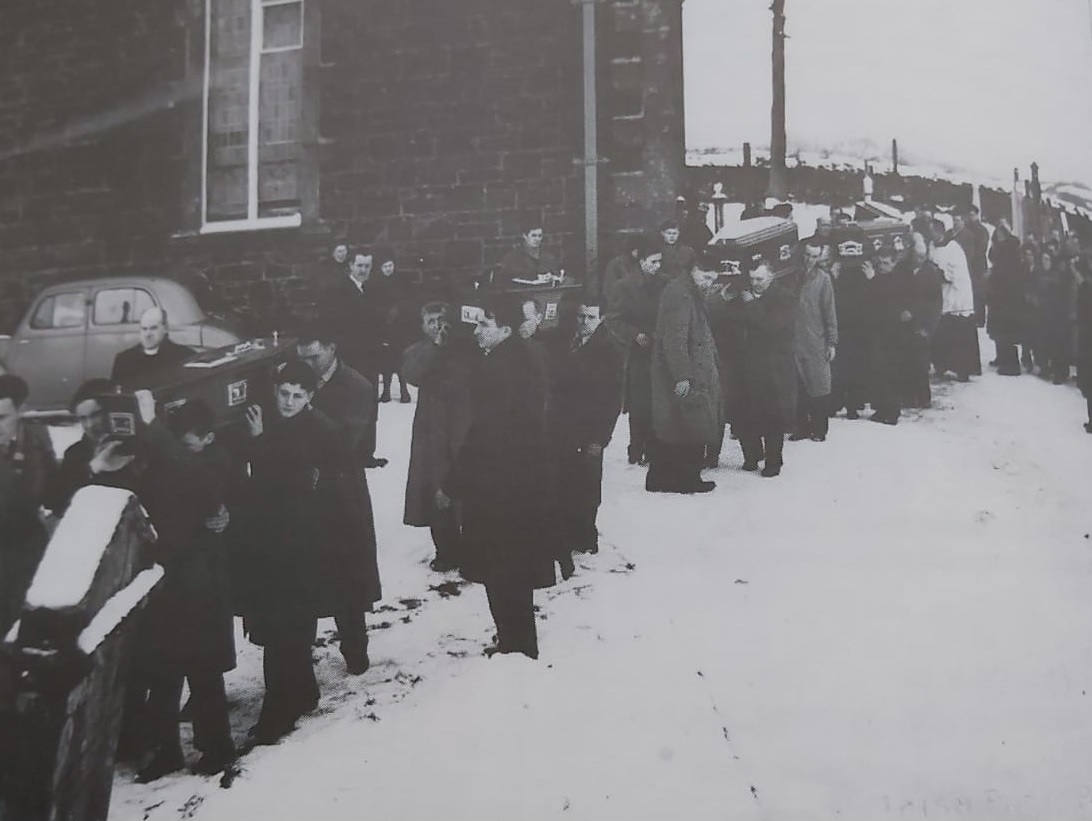 Snow continued to lie on the ground as the family were laid to rest.

The operation to retrieve the remains of the victims from the pond was hampered by the fading light, and it was not until the following day that all six were recovered.

Crowds had gathered on the bank around the pond as the bodies were recovered, with The Chronicle reporting 'few eyes among the onlookers that were not bedimmed with tears'.

More than 1,000 people attended the funeral the following Monday, when the family were laid to rest in the biggest grave ever prepared at St Mary's Church, Drumagarner.

Pupils from the Convent of Mercy, where John and Patrick Derry's sister Kathleen attended school, lined the route, while children from Crossroads Primary School, where the boys attended, were also present.

Fr Anthony McLoughlin, who had accompanied Kathleen and Eileen McCausland in returning to the scene of the tragedy after they raised the alarm, led the mass' homily.

Over 700 mourners braved the falling snow to pay tribute at the graveside in what The Chronicle described as 'a touching demonstration of public sorrow and sympathy'. 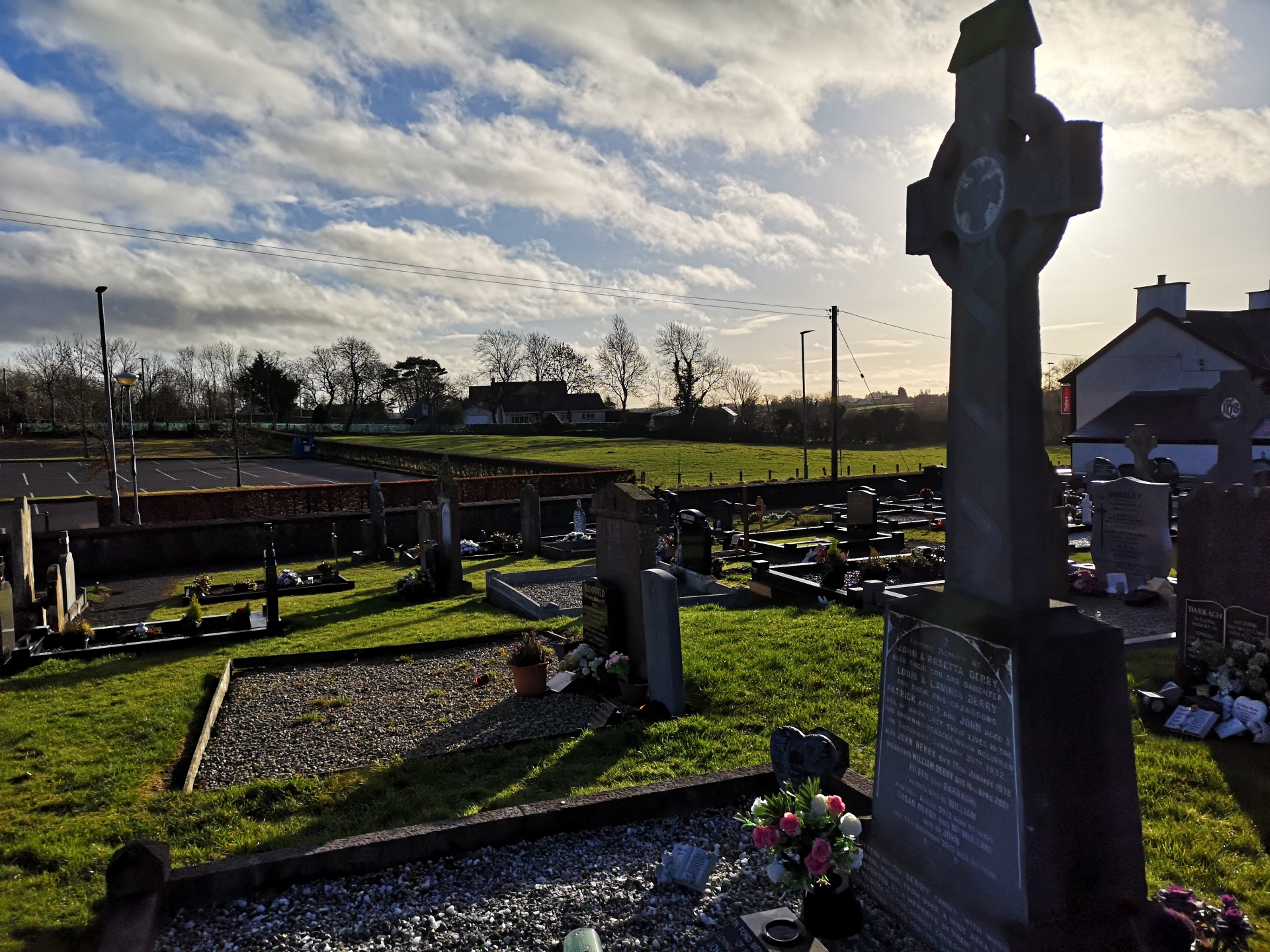 At the time, the Derry grave was the largest ever prepared at St Mary's Drumagarner.

The tragedy shattered the town and had a profound effect on the family. Little trace of them remains in the riverside town.

“Johnny moved around to the back house where he had been reared, but he didn't stay that long. He worked round the Convent for a while and then the family moved to Belfast,” recalled Dessie Darragh.

“It's never heard mentioned any more. People know about the tragedy but don't really know the details. A lot of people think it happened in the lake, but it was actually in the overflow.”

“It was a deeply sad day, they were well-known, well-liked and well-respected.”

The school-house raid that ended in tragedy a century ago

An RIC raid on the dance left a 16-year-old boy dead.

On the night of December 28, 1920, a group of young people defied an 8pm curfew to hold a dance in a Ballerin school-house in County Derry. Liam Tunney tells the story of how the tip-off from a local insurance man, led to an RIC raid that had tragic consequences for one of the area's families.

Two new mobile businesses have launched in the town over the last few weeks.

The recipient appeared to have left the gift behind when he moved branches.
ADVERTISEMENT - CONTINUE READING BELOW