Two new mobile businesses have launched in the town over the last few weeks. 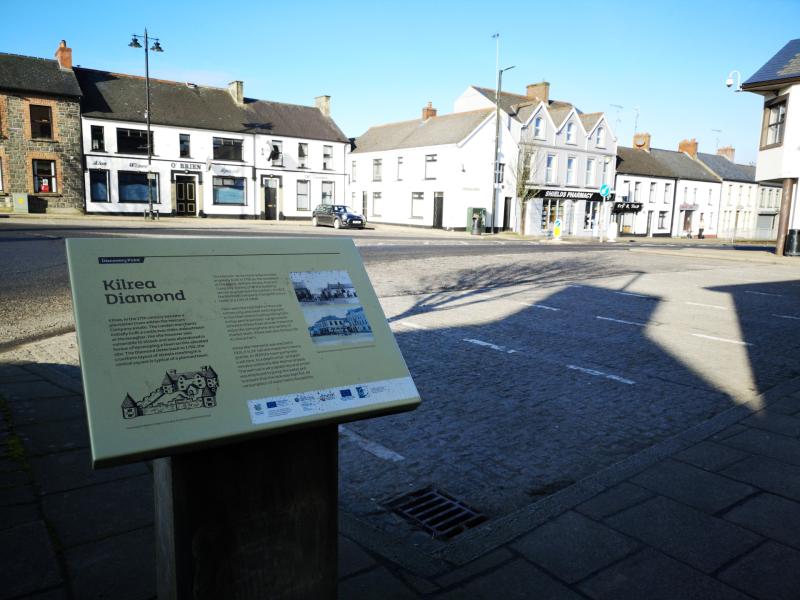 The original 'Reopen in February' notice has a line through the word 'February', replaced by 'March'. That month also has a line struck through it. Only a question mark remains.

Up and down the street, the hallmarks of the third period of lockdown are there. Traffic, but very few people on the pavements.

There is early Spring sunshine, and those that do venture out catch the eye. A woman pauses to browse in the window of McCloy's chemist. Candles. She moves on across the street towards the Diamond.

Long-standing businesses that look out on the roundabout lie silent. 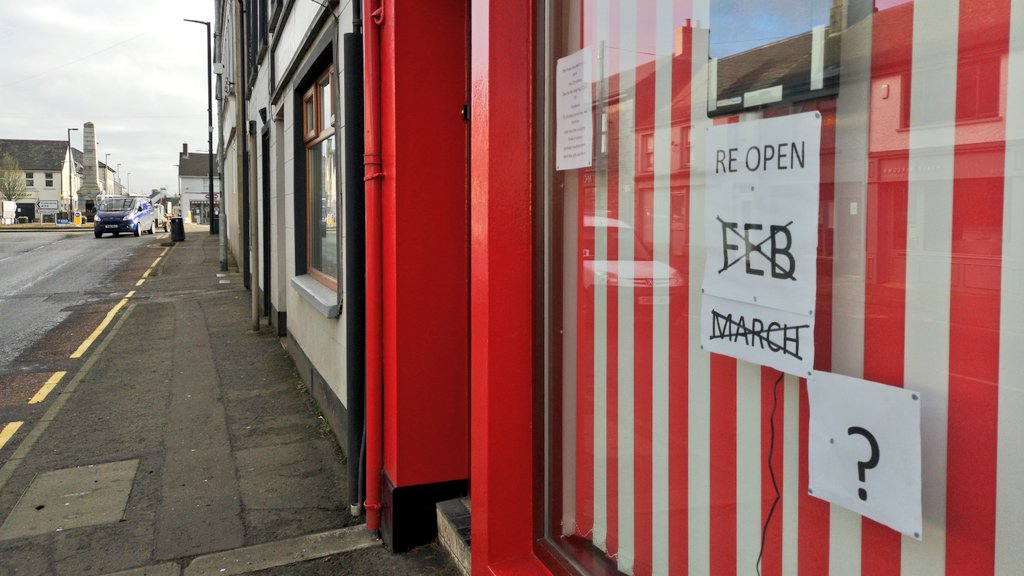 A fresh coat of paint on O'Brien's bar reflects the sun. A note on the shutters of Rainey's bookies directs punters to 'dial-a-bet'.

The glass door of Mullin's carries a notice declaring no ice cream will be sold until March. Only Emporium Interiors and McCloy's have the lights on and the doors open.

Metal fencing cordons off the old ivy-covered hotel building at the Diamond. The Town Hall clock has stopped. In the centre of Kilrea, it is eternally half three.

On Maghera Street, a number of shop units are empty. An occasional 'to let' sign looks hopefully out from a vacant window. Flat pack furniture lies in boxes on the floor of one unit.

A van sits outside Donaghy's waiting to be loaded up. Behind the electrics shop, the large car parking space that services the town is well-populated.

Many of the visitors have been attracted by one of the town's newest additions. The Little Coffee Box opened just three weeks ago, a converted horse box selling coffee and snacks in this historic town. 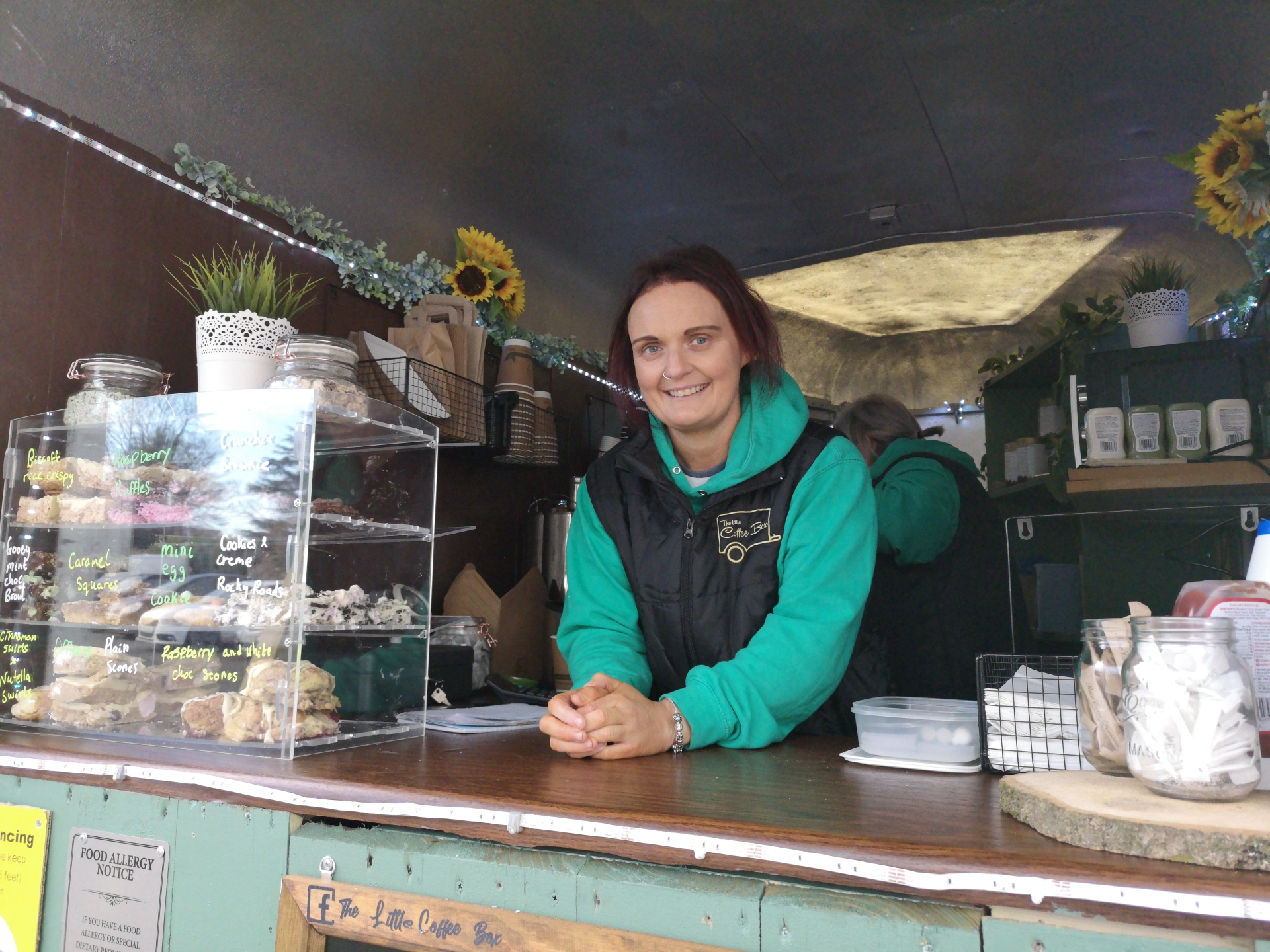 Ciara McKenna ready to provide the town with coffee and refreshments.

For owner Ciara McKenna, lockdown has had a relatively positive effect.

“A lot of shops and places aren't open, but it's been really busy,” she said.

“Maybe with cafes not being open, and Kilrea having Portna and Hutchinson's Quay, people can grab something and go for a walk.”

Ciara began baking during the first lockdown almost a year ago, and as her confidence grew, so did her ambition.

“I'd been doing afternoon tea boxes, and then I got this idea that I wanted to convert a horse box into a wee coffee hut,” she said.

“My partner did all the work himself and converted it. We got it off a man in Knockloughrim as a plain horse box and it's unreal the way it's turned out.

“We opened up on the worst weekend, because it was really windy and rainy, and then on the Saturday the snow came.

“The snow was heavy, but I couldn't believe how busy we were with how bad the weather was. Every time you look there is a queue.

“When you open you'd be worried if anyone was going to show, or if you've baked enough, but every weekend I've had to bake more.

“I keep telling myself, because I can move about, that if it's not doing well, we can go somewhere else, but I hope it won't come to that.

“I think if our stuff is good enough, we'll still get our customers.” 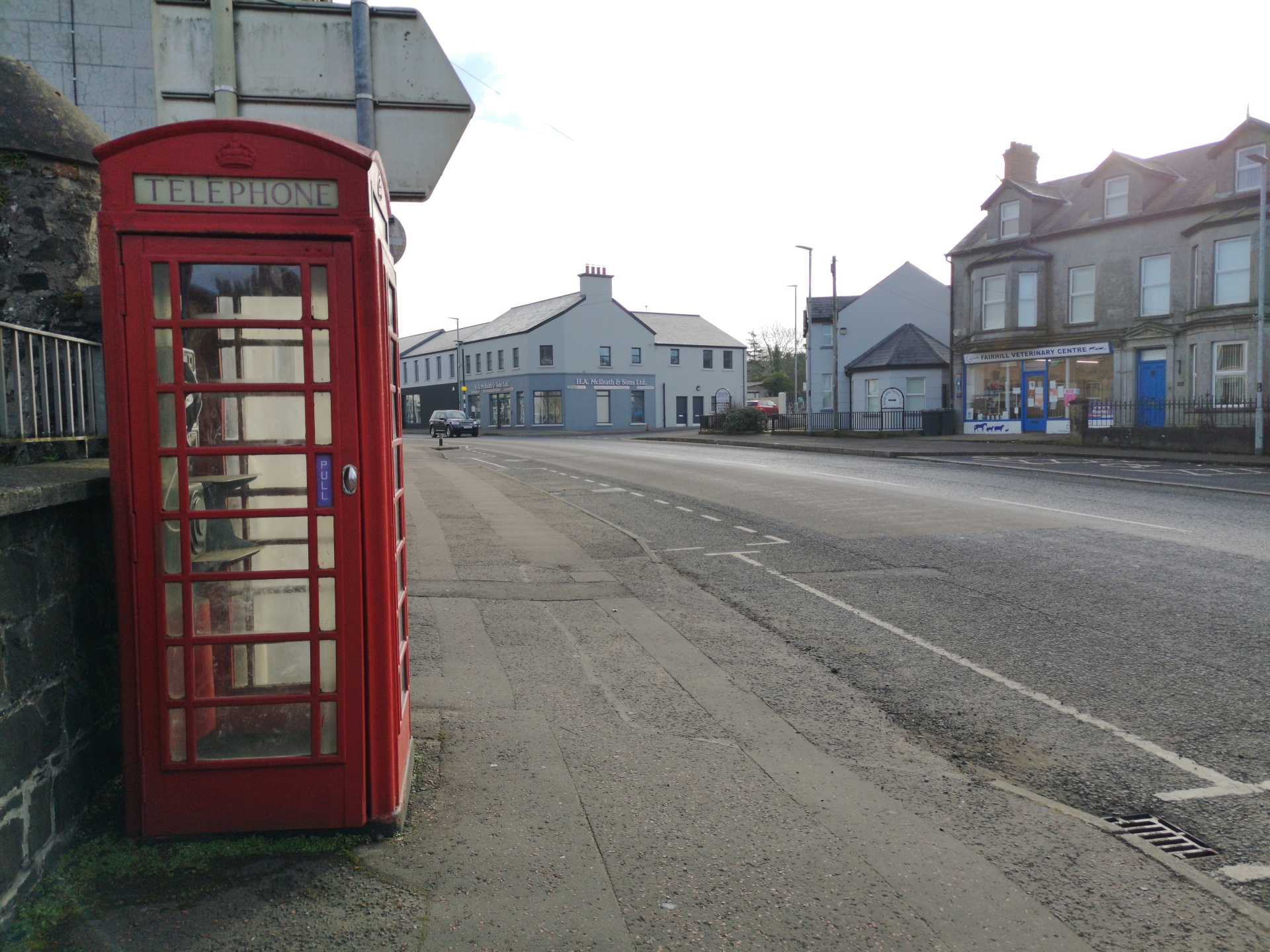 An old-style phone box at the top of the Drumagarner Road. Kilrea has two, with the other at the Diamond.

Things are starting to pick up as I head back down through the Diamond and onto Bridge Street. Chatter drifts through the open door of McAtamney's as I make my way past.

The late John Dallat's constituency office sits empty, its signage stripped from above the door. What a difference a year makes.

Gym equipment sits in partial shadow in the unit next to the car wash. On down the hill the lights on the school sign continue to flash a warning to motorists.

The Bann glistens in the distance, still swollen from the recent rain as it meanders its way around the old Portneal Lodge site.

After closing its doors in 2014, the building has been dormant since, with just the picturesque walk around its perimeter left to attract people there.

The appearance of a branded pick-up truck at its entrance, and the flashy new sign, however, point to renewed life at the site.

Inside the gate sits yet another recent addition to the town's business landscape. 'Stranded' is a burger van with a difference, as owners Adrian Doherty and Ailish Deeney explain.

“I don't know if it's just because of lockdown, but it's good anyway. We're offering something different that no one else does round here.” 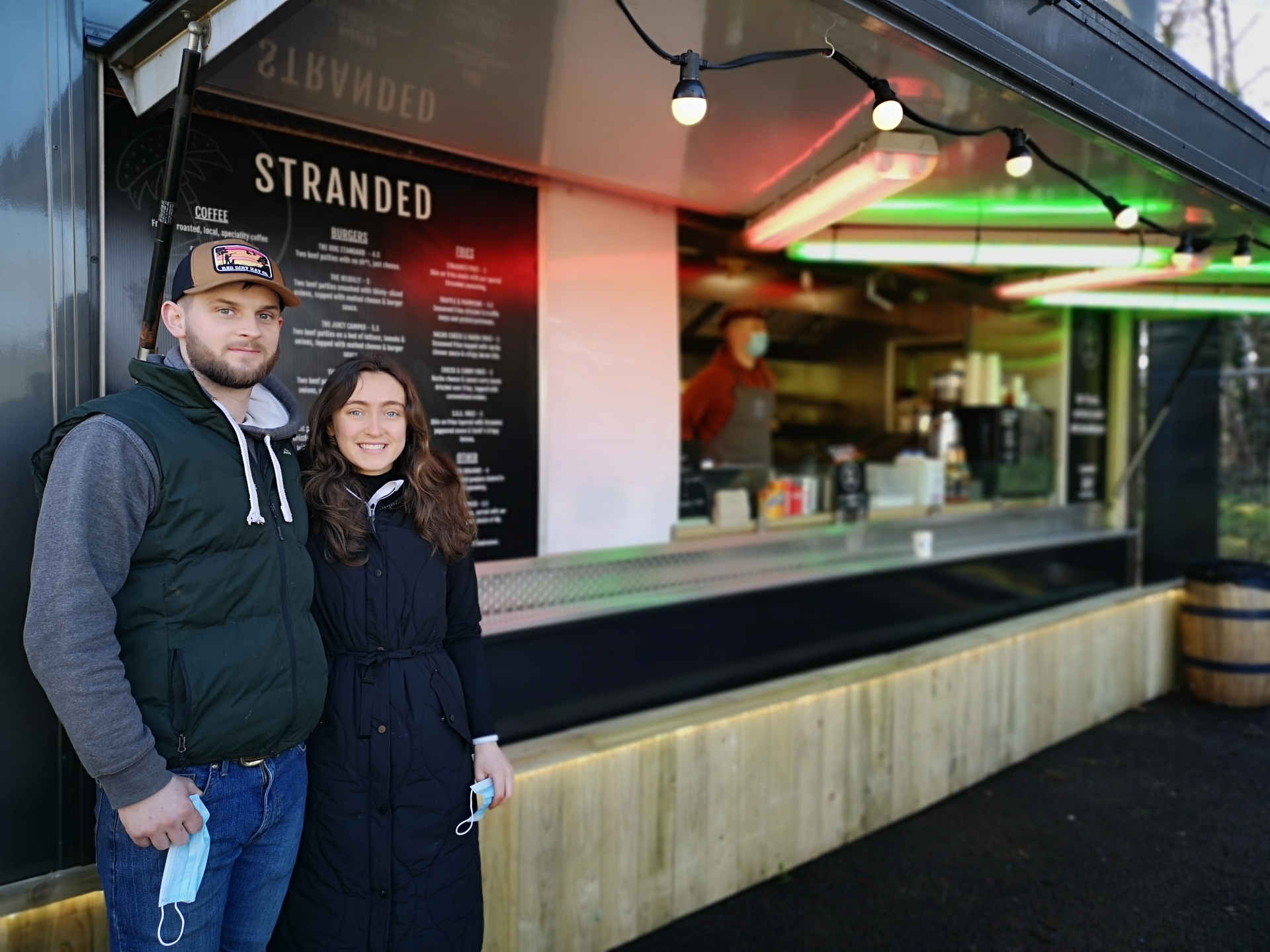 Adrian's partner, Ailish, says local reaction to their opening has been hugely positive.

“I think the local residents are very happy to see the site being used as well. It's been lying abandoned and people have been abusing it,” she said.

“With the bridge, we thought it would be a good place for people passing, and it's a nice location beside the river as well, it's scenic.

“It's something we'd always considered, coming from a catering background and being foodie-lovers. We've always talked about a burger van and this year we took the plunge.

“It's been extremely busy, we've got a mad response that we just couldn't believe at all. People are queuing and travelling to come here, so we couldn't have asked for a better response.”

The pair, like any other lockdown era entrepreneurs, have had their doubts, but they have planned well ahead, with both their business model and their branding.

“It happened so fast we didn't really have time to think about it. We had to get the van done up and we were still doing that on opening week, so it was a whole rush to get everything sorted,” said Ailish.

“As far as competition goes, there is room for everybody and we want everybody to do well, because we're all in the same game at the end of the day.”

On the way back to the car, I pause at the Diamond, taking a seat outside Mullin's. The weather has brought people onto the streets and, as it often does, has them in good spirits.

A man makes his way briskly towards Coleraine Street, his dog on a lead in front of him.

A woman jogs up the hill as he heads down. 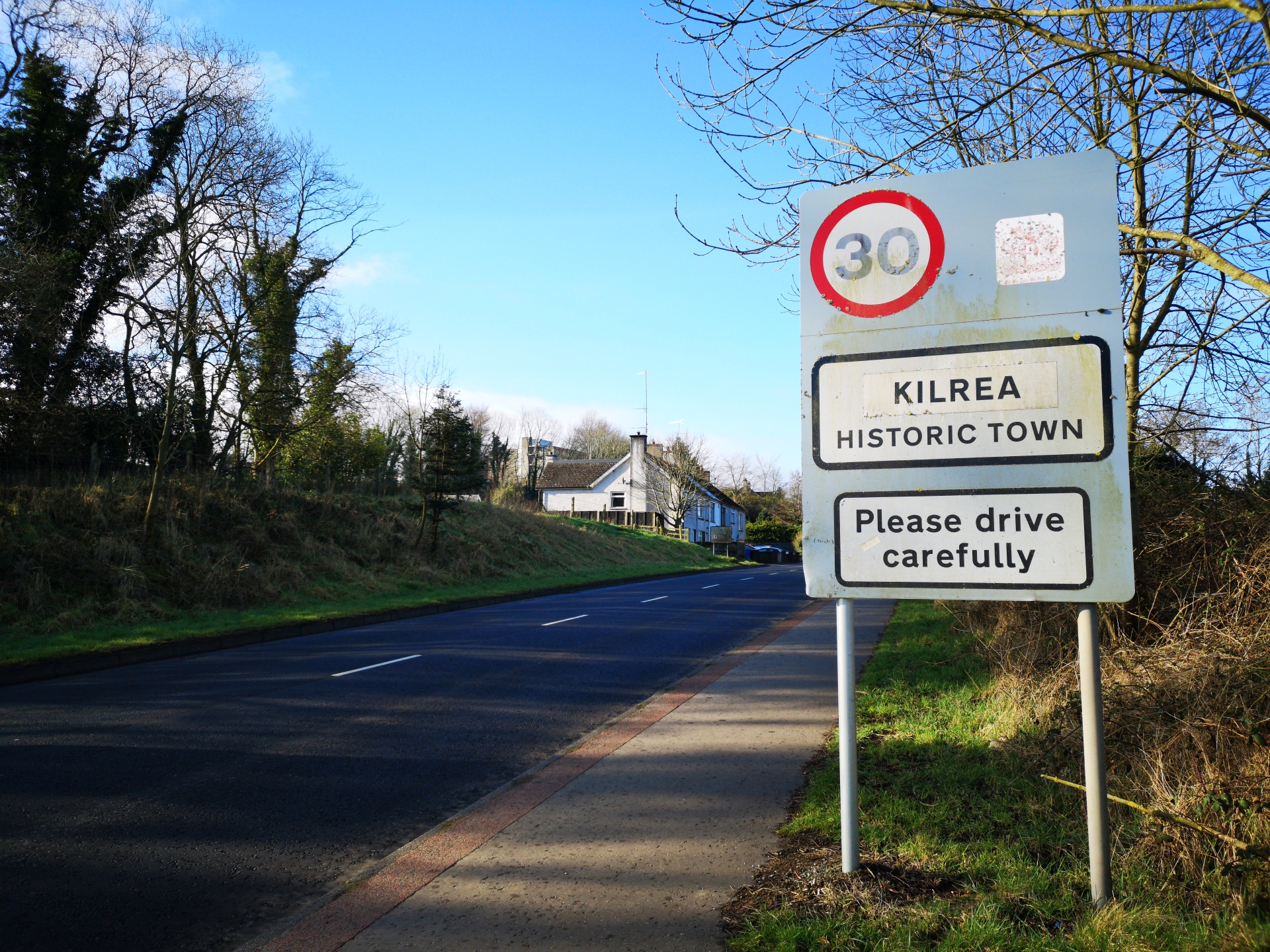 Conversation floats across the street from where three men have stopped outside the bookmakers. It's clear they haven't seen each other in a while.

They're uneasy, maintaining the required distance, but you get the feeling they'd be happy to take a seat and spend the afternoon just watching the traffic go back and forth.

The conversation ends. They head off in separate directions, one down Bridge Street, one down Coleraine Street and the other across the Diamond towards Church Street.

As the daily update brings news of mounting vaccine numbers and falling case numbers, you can almost touch the hope.