From Dungiven to the New Lodge: Jim O’Kane and The Starry Plough 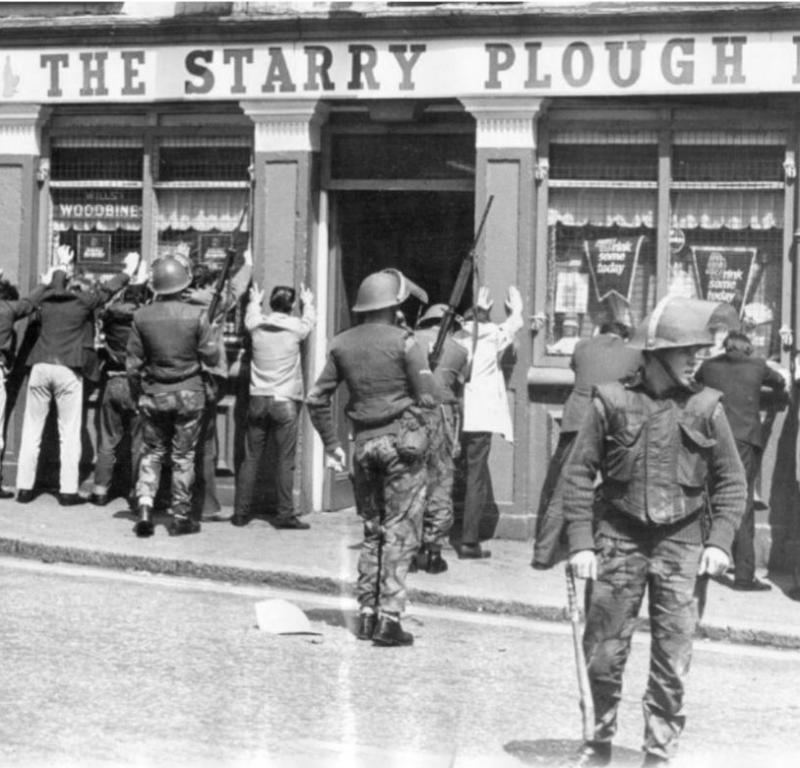 Soldiers searching civilians outside the Starry Plough bar on the New Lodge Road.

Pictures can paint a thousand words. When Dungiven woman Bridie Ward sent us a 1970s image of men lined up by soldiers outside a bar on Belfast’s New Lodge Road, it begged further investigation. Liam Tunney caught up with her to find out its background.

The sight of men spread-eagled on the wall of a bar while soldiers search a premise is one that evokes strong emotions in this country.

The Starry Plough sat halfway down the New Lodge Road in north Belfast, but was owned and run for years by Dungiven man Jim O’Kane.

Although a staunchly Republican area, Jim’s sister Bridie recalled a mixed crowd at the bar in its earlier days.

“There was a mixed crowd away years ago, it was a bar where everyone would meet up. People from Tiger’s Bay would have come in there before the Troubles started,” she said.

“Before the Troubles, the sea men, or the dockers, would have been in the bar. They were away at sea for maybe six weeks at a time and they had all this money so they spent it in there.

“At the beginning, he made a lot of money in the bar, because when he bought it, there were always darts matches in it.”

By the time the Troubles began to poison the city, though, the bar was singled out on a few occasions by the British Army.

‘Times of Troubles’, by Andrew Saunders, describes how, on one of those occasions, the bar was raided following a period of rioting.

“On the night of 21 May one platoon went into the Starry Plough to make arrests,” it read.

“They removed thirty people for questioning and felt sufficiently threatened by the crowd which had gathered outside that they fired rubber bullets.” 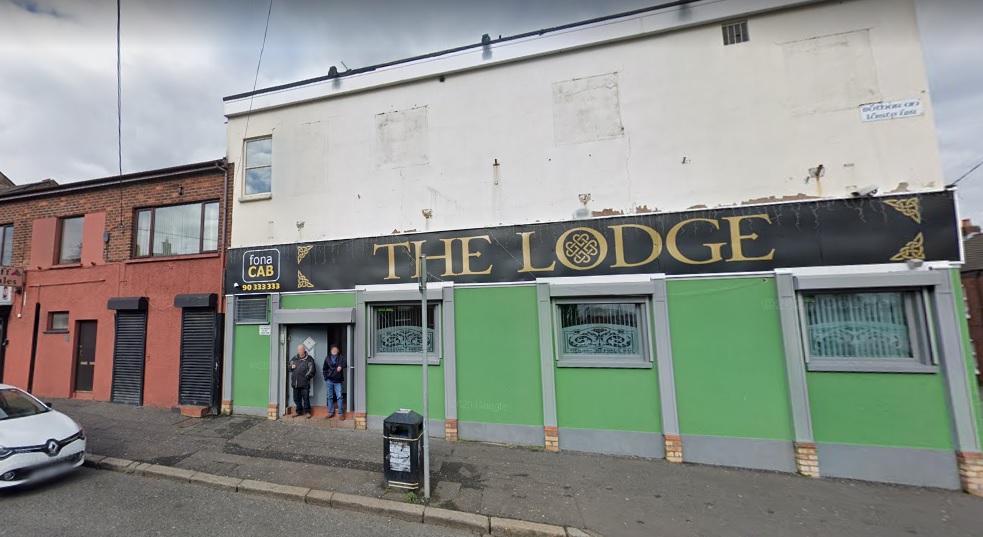 The bar has been rebuilt and is now named 'The Lodge'.

The Starry Plough’s owner Jim was a Republican Labour councillor in the city and his position attracted unwanted attention that regularly escalated into a physical threat.

He twice survived attempts on his life, attempts that tragically resulted in the deaths of two companions, including a doorman at the bar in the 1970s.

North Belfast historian, Joe Baker, recalled the aftermath of the bomb in an article he wrote for the North Belfast News.

“I remember my mother running to it screaming after it was bombed by Loyalists,” it read.

“She knew that my Dad had been in it but fortunately he had left some time before to head off to another bar.”

Another attack, in 1972,  on Jim’s home in Cedar Avenue resulted in the death of Bridget Breen, a 33-year-old woman who was babysitting for the O’Kane family.

“Jim lived up there most of his life and was married up there. They had a hard time during the Troubles, it was tough in the 70s up there,” she recalled. 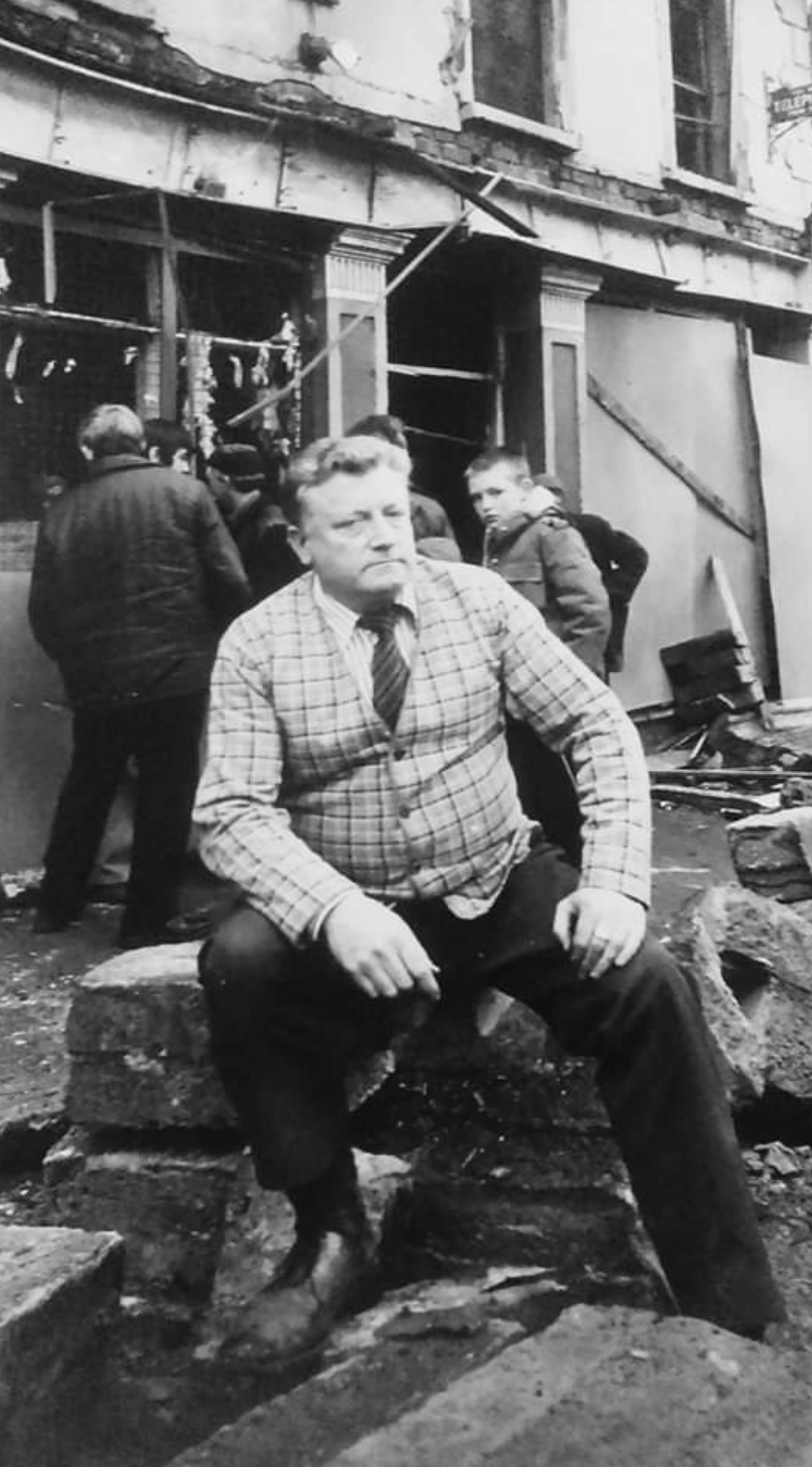 Jim O'Kane outside the Starry Plough in the aftermath of the bomb that killed a doorman.

“During the Troubles, they planted a bomb in the entrance [of the bar] and it blew up. He survived, but the door man was killed.

“He also lost two homes. He lived in a beautiful house, but they burned him out. They threw a firebomb in and the four boys were very lucky to survive.

“The boys were sleeping one night and there was a woman who used to babysit for him. Josie, his wife, was going down that evening to help out in the bar.

“The phone rang a couple of times and the first time before she went out, it rang and they said, in an English tongue, ‘Oh sorry, we got the wrong number’, so they must have been looking for my brother.

“He would have come home at night to have his tea or dinner and went back to the bar. She was ready to go out again and the call came through again, but they put the phone down on her.

“She went on to the bar and the babysitter came in. It was one of those old houses, a big red brick house, with a front room like a sitting room at the front and a big long hall.

“They threw the duffle bag with the bomb in through the front room, breaking the window.

“The babysitter panicked and ran out the front door. It was the big, huge, oak door that was on the front and it fell on her and killed her.

“The boys survived because the house was so big that it was just the front that got demolished and they were sleeping away at the back.”

Jim died in the 1990s, but an off-licence bearing the family name remains in place on the New Lodge Road.

The effects of the bomb attacks and threats on his life left a lasting impression on the Dungiven man.

“He never really got over the babysitter or the doorman,” said Bridie.

“After that, when he was going down to the bar, and especially coming home at night, he always made sure he checked his car, in case they planted something on it. It was a scary time.” 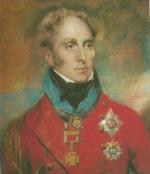 The historic and tragic stories of Maghera's United Irishmen

A look at a bloody time in the Derry town's history.

A historic battle on the fields of County Derry

The Battle of Flemming's Farm was a crucial point in the 1641/42 rebellion.