Magee on Music: Foreign Owl tell their story so far

Eoghan, Ciarán and Míchéal are a band and so far, this year they’ve played Germany and Brussels. 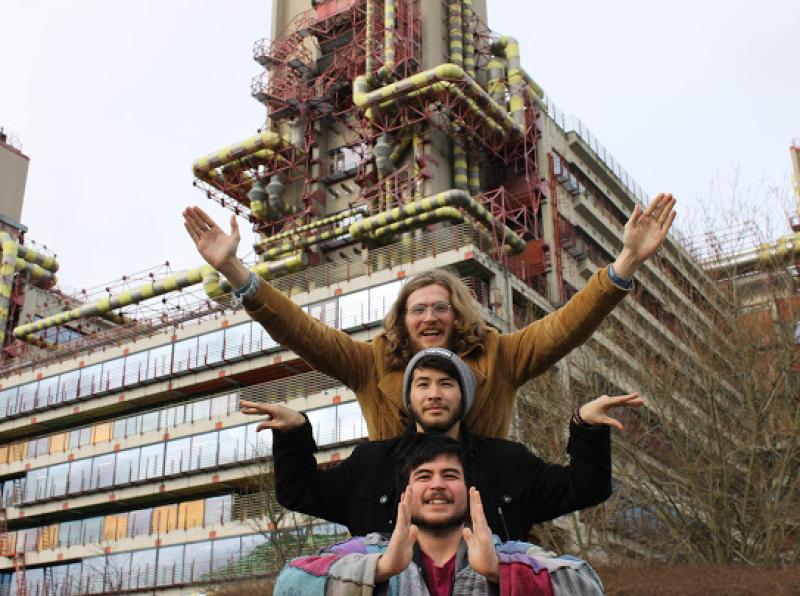 Foreign Owl are a band who are going places.

Eoghan, Ciarán and Míchéal are a band and so far, this year they’ve played Germany and Brussels.
Eoghan told me: “It was great, we always really enjoy playing to a new audience. It was the same story when we went to Japan.
“We didn’t know what people were gonna think. We played to whole crowds who never heard us before. It’s reminiscent of the same feeling we had when we first played this set in Derry.
“We didn’t know if people would like it. We didn’t even know if it made sense. Japan was our first tour.
“Ciarán and Míchéal are from Japan, so it was always our dream to play there. One year an opportunity arose, and we just grabbed it. After that we played some shows around Ireland, and now Central Europe. They seemed to really like us there, especially the anarchists.”

If they excite the anarchists, who excites them?
“We really don’t have many influences. I think a way to look at is we were influenced by each other. In Foreign Owl, we’re more inspired by how the other plays their music, rather than another outside the band.
“So of course, our own individual music taste might affect how we play, but that’s filtered before it’s gets into the rehearsal.
“If me and Ciarán are vibing over Radiohead, it’s not going to get far if Míchéal isn’t in the same feeling. It only really works when we are totally in the room with each other, not somewhere else.
“So, we’ve kinda developed to leave any outside influence by the door.
“When we started, we all really enjoyed The Red Hot Chili Peppers as well as a band called Radwimps from Japan, if any bands added some influence on the band’s roots, I’d say it be them.”

What about locally?
“There’s really so many to mention. I don’t know how much people from Derry notice, but the music scene here is one of the best I’ve ever known.
“There’s so much realism to it. If you go to other cities or country and watch some bands, there’s a lot more ‘trying to be something’ but in Derry, almost every act is totally authentic. It’s as vibrant as the Dublin scene but with more energy.
“Dirty Faces are awesome, and the nicest guys. You need people like that to have a healthy scene.
“Happy Out is class, they totally inspire us. Gas Hands are great, and the singer Dylan Brady and bassist Nolan Donnelly have done amazing things for the life of the music scene.
“Cherym have really taken off and they deserve that. Fantastic band.
“Red Organ Serpent Sound are phenomenal. There really are so many great bands and artists in Derry that it’s hard to give everyone the credit they deserve. When you start to think about all the great artists and shows over the years, it’s mind boggling.”

Tell me about other stuff you do
“We are kinda musical focused. We met through Taiko drumming, Míchéal studies music in NWRC, Ciaran’s a drummer through and through, great sound engineers too. We have a lot of passion for friendship but in terms of our hobbies and activities, it’s all music and art.
“If we can improv it, we jam it. It’s cool that you asked that because I didn’t even notice that everything, we’ve all done, has pretty much always related to music.”

And what have you got planned?
“Last year we recorded our debut album to 16-track tape. It’s been a long time coming and we’re excited to share it.
“For us, we wanted to wait until we were good enough at the whole music thing before attempting an album. Originally, the plan was to release the album this year, as well as multiple tours in Ireland and Europe as well as festivals, but unfortunately, with the recent pandemic, the music industry has taken a big hit. It’s difficult to plan when everything is uncertain.
“Most of our shows we had planned our cancelled and it’s hard to figure out where to go from there. If there’s a way we can bring any of our plans into fruition this year, we will. If not, it’ll be next year. We’ll have our first single from the album coming out on the 27th of March. It’s available for pre-save here https://distrokid.com/hyper follow/foreignowl/blowfish “.