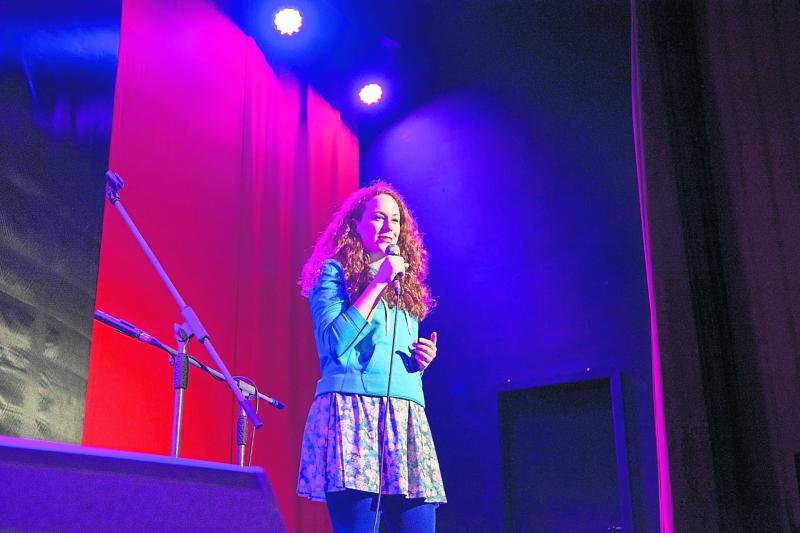 Alice McCullough will be taking to the stage on Saturday, October 2.

Three acclaimed performers are bringing new shows to Derry this week as part of the Bounce d/Deaf, Disabled and Neurodiverse Arts Festival.

It is the first time that Bounce has taken place in the North West and all three are excited by the challenge of performing in Derry.

The shows, which have been commissioned by the University of Atypical, are free and open to the public but pre-booking is recommended.

Dancer and choreographer Helen Hall will be performing her new show ‘Collecting Moments’ at the Nerve Centre on Friday, October 1 from 8-8.30pm.

Helen, who has been visually impaired from birth, began dancing as a young child and says it helped her with spatial awareness and movement.

Her new piece was inspired by a multi-media collaboration put on hold because of Covid-19. It combined dance with music, visual art, video footage and photography.

She returned to the studio in June, and it was this creative exchange between Helen and fellow artists Bronagh Broderick, Jamie Maison-Harper, Paul Moor, Vasiliki Strasinaki, Katie Richardson and George Sloan that led to her new show.

She said: “Because I had collected all these beautiful moments of sights and sounds, it had a real sense of joy, so they all found their way into this new piece, which I’m looking forward to sharing with the audience.”

Alice McCullough’s new show, ‘Brave New Words’, is taking place at the Verbal Arts Centre on Saturday, October 2 from 6-8pm. She will be supported by popular spoken word poet Abby Oliveira from Derry.

Alice, who is bi-polar, is an acclaimed performance poet and stand-up. Her show is a collection of poems, stories and spoken word, dealing with her condition, creativity, and the process of stepping back on stage for the first time since the Covid-19 outbreak.

She said: “I called my new show Brave New Words because it has been such a difficult year and it is great to have the chance to begin performing again. It is my first solo show in Derry, and I can’t wait to perform at the Verbal Arts Centre.”

Sinead O’Donnell is an internationally acclaimed performance and video artist, whose new live show Trigger takes place at the Nerve Centre on Saturday, October 2 from 7-8pm.

Over the past five months, Sinéad has been experimenting with different creative approaches and processes, developing rich layers of thought channeled into actions that come together in this newly formed live performance.

Sinead’s new video exhibition, Grounding and Flying Dreams will be on show at the Centre for Contemporary Art in Artillery Street from October 1-3.

It was developed from a series of explorations researching public space and how it informs and shapes ideas relating to feminine landscapes.

She said “During the pandemic I found myself thinking: where can I make my work? and do I feel safe in public spaces making my work? At this time the rise in domestic violence being reported was hitting the media and the seriousness of this reality was becoming an everyday thought. I thought about a person, or family not feeling safe at home and how I could make work publicly in safety. So, questions of safety and the feminine body is an ongoing concept that informs my work.”

All in-venue events will be subject to enhanced Covid-19 protocols and procedures to keep everyone safe. For more information on all the live shows, workshops, and online content and to book tickets, go to www.universityofatypical.org/bounce