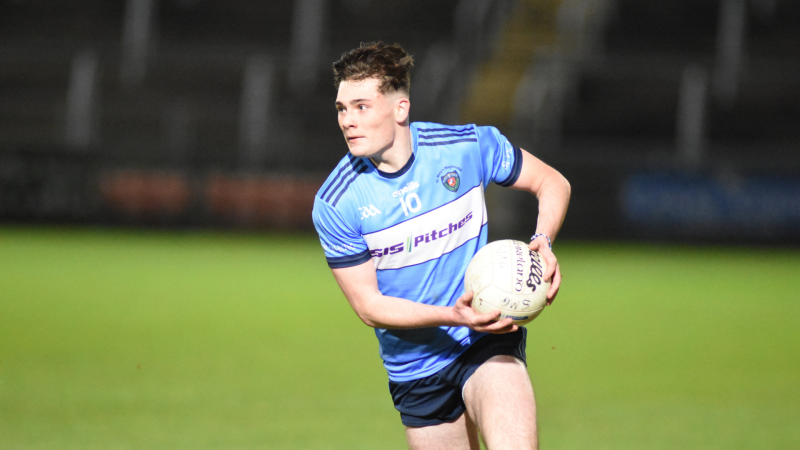 Benen Kelly’s football career is a carbon copy of his St Mary’s Magherafelt’ passage to Sunday’s MacRory showdown, it resembles anything but a straight line.

With 10 days to the biggest day of his career, everything is crystal clear.  Seated at the school’s press day, he relaxed.Moving up the school years, their team lost more important games than they won.

When they were a kick of the ball away from winning the Rannafast Cup, Kelly was an unused substitute that afternoon in Bellaghy.

Now, he’s one of the first names on the teamsheet. The Cargin man’s GPS unit readings are off the charts.  The numbers are beyond anything in the Saffron county setups.

His Granda, Francis Scullion, is of Ballinderry stock, a brother of Colm who sponsored their club when they were kings of Ireland some 20 years ago.

From the table beside us, former Moneyglass and Antrim star Kevin Brady jibes at Kelly’s transfer to Cargin.  But, it’s all light-hearted.  Taken and given in good jest.

“We have always lived in Toome, but I used to play for Moneyglass,” Benen points out.

“My Da is a Moneyglass man, I played for them in the u-6s and u-8s, but I left them because all my friends were from Cargin.”

He lives ‘about 100 metres’ form the Erin’s Own club’s Shore Road base. Tom Shivers and Conhuir Johnston, also from Cargin, are pieced around Kelly in an attack that has set the competition alight so far.

It didn’t take long to settle into school life on the other side of the Bann.

“At the start, it is hard but once you start playing football with them and interacting with them, you just come together, “ Kelly outlines.

"When you play for the county (Antrim), even in friendlies, they’d always hammer us and they’d give me stick."

Growing up, there was plenty of football on the go at the various youth tournaments.

“It was always great craic, but I suppose you were always playing football,” he said.

“I always knew I wanted to play football, right from the start.”

Having played every position on the field, you can see how his ability to cover the grass would be a manager’s dream.  As the u-14 grade approached, everything began to get more serious.

“You know yourself, it changes when you and play championship,” Kelly offers.

“It is about the sense of winning as a team, I enjoyed that feeling and I wanted a bit more of it.”

A glance at the ‘Convent’ scoring charts, Kelly’s modest 1-4 tally sits behind seven others, but he has stroked over two ‘45s’ during their season.

He first tried the forgotten skill of kicking the ball off the grass at u-16 level and after a crisp strike, he’s kept at it ever since.

Now the buzz is real. Preparations are going well and Kelly is counting down the days until he gets the chance to play on the biggest stage of Ulster Schools football.

“From first to third year, we were always nip and tuck at the semi-final stages,” Kelly recalls of their steady performances before they won the shield version of the Brock Cup in Year 11.

When asked what transformed them into MacRory contenders, Kelly took a few seconds to ponder before carefully landing on his answer.

“I’d have to say the Rannafast,” he says softly, with thought behind it.

“Yeah, it was losing that day and the boys were absolutely distraught. Ever since then, we’ve been trying to get back. We missed our Lower Sixth year at the MacRory which drives people on."

Living in each other’s pockets, a school team always has that club feel to it. Five days a week for seven years, throw in a mountain of training sessions and social events and you have a terrific bond.

Another factor in the Magherafelt story is the 2017 MacRory success and the current group being present on that magical day in Armagh.

“There was an unbelievable buzz around the school,” Kelly states.

It left an imprint on a group of players not craving their slice of history and a chance to make names for themselves. For Kelly, it was their second half performance in the group game against Abbey this years that left an impression on him.

“In the group stages and we didn’t play well in the first half,” he said.

“We came out and played well in the second half and played them off the pitch. That’s when I realised we had a good team that could go on and win it.”

They are the form team and going into Sunday with an unbeaten record, but Kelly is a mixture of nervous and excited, the perfect concoction for someone going into battle. The final hurdle awaits.

This St Mary's group are going in search of their first success.
ADVERTISEMENT - CONTINUE READING BELOW