More late drama at the Brandywell as City fight back again 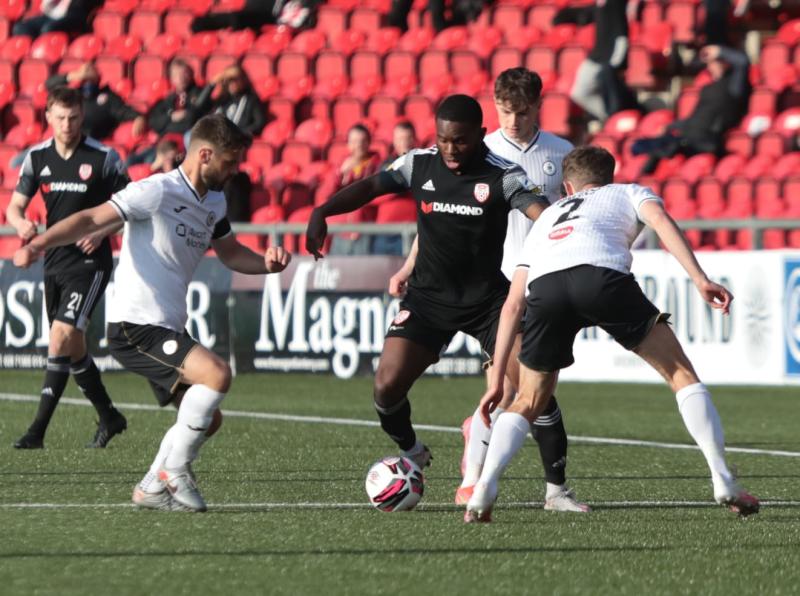 James Akintunde on the attack for Derry City against Sligo Rovers. Pic by Tom Heaney, nwpresspics

Ronan Boyce's late goal saved Derry City a point in a frantic finish against Sligo Rovers at the Brandywell.

Sligo looked to be on their way to all three points when Jordan Gibson gave them the lead early in the second half, but it wasn’t to be thanks to yet another battling display from Ruaidhri Higgins’ players.

Chances were few and far between in this game but Derry created their first opportunity just 10 minutes before the break. Danny Lafferty robbed Lewis Banks on the wing and raced into the penalty area before pulling the ball back into the path of Parkhouse, and although the striker hit it well, it flew just over Ed McGinty’s crossbar.

A cagey first half almost ended in a Sligo goal, as a nervy clearance from his own penalty box by Jack Malone put his team in trouble and Johnny Kenny collected the ball and went straight for goal, his piledriver from 20 yards pushed behind by Gartside.

The goal the game needed came ten minutes into the second half and it was much too easy for Sligo as a ball right through the middle of the pitch was flicked on by Mark Byrne to send Jordan Gibson through on goal, and the midfielder slotted it past Gartside to make it 1-0.

Derry responded with some urgency and managed their first shot on target, Parkhouse winning the ball and finding Akintunde just inside the Sligo area, who laid it off for Jack Malone, whose curling effort finally tested McGinty.

Sligo should have ended the game on 75 minutes however as another peach of a ball forward by Bolger put Kenny in behind. Gartside came off his line and got caught in two minds, and the striker went for the lob and got it all wrong, the ball going wide.

To the dismay of Higgins, Walsh then pulled up with an injury and had to be replaced by Patrick Ferry, just 12 minutes after coming on.

Derry refused to give up and they got their rewards five minutes from time when Fitzgerald’s cross came all the way to Boyce whose shot took a huge deflection off Shane Blaney to take it beyond McGinty.

Derry could then have won it late on but Ed McGinty kept out Patching’s dipping volley with just two minutes remaining.