First half dismissal contributes to third successive defeat for Candystripes 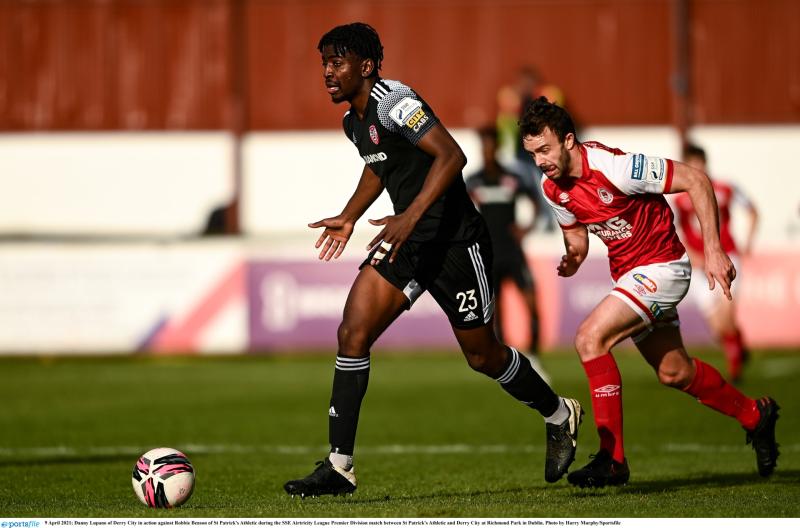 Danny Lupano was red-carded in the first half at Richmond Park. Photo by Harry Murphy/ Sportsfile

Derry City remain bottom of the Premier Division after Danny Lupano's first half red card cost them dearly as they fell to defeat at St. Patrick’s Athletic.

It is now three defeats from three games for Declan Devine and his players this season, and and it was always going to be an uphill struggle after 30 minutes, when defender Lupano, already on a yellow card, needlessly pulled Matty Smith back and gave referee Ben Connolly no choice but to produce red.

From there the game was one-sided. Pat’s almost took immediate advantage moments after the dismissal as the resulting free kick was put into a packed area and the ball fell kindly for Smith, whose shot through a crowd was brilliantly kept out by Nathan Gartside, who saved low to his left.

The opening goal came right on the hour mark when Ian Bermingham’s cross came to Coughlan in the penalty area and with black shirts converging on the Pat’s man to block any shot, the ball broke for Robbie Benson at the back post who placed the ball between Gartside’s legs from close range to make it 1-0.

Ten minutes later it was 2-0 and the game was up for Derry City who could barely get their foot on the ball such was the Pat’s dominance. Sam Bone picked out the run of substitute Darragh Burns, who took on Cameron McJannett as he raced into the area, and he got a yard on the Derry defender before shooting across Gartside and into the net to make it 2-0 and ensure a third successive defeat for bottom of the table City.