Local club ready to take next big step with U17s 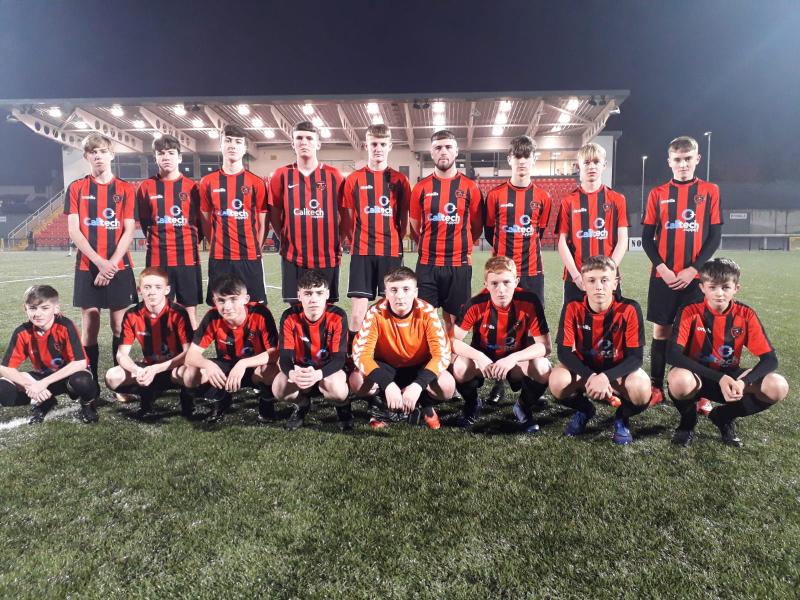 It is a new dawn for Phoenix Athletic Football Club who are preparing to embark on a journey into the National League which has been 10 years in the making.
The club, based in Rosemount, will enter their U17 side into the National League for the first time, where they will compete against the likes of Maiden City, Institute, Ballymoney United, Dungannon, Limavady and Tristar. It is a huge step up for the local side, not just in terms of prestige, but also their own ambition, which has remained steady since making the move from Sunday League football to youth football.
For Head Coach Christy McGeehan, who has envisaged and worked for this day for years, it is the next natural step in the progression of a club which has set down roots in the community and which continues to grow stronger.
“It’s a big step up for them,” he agreed.
“From where they started and what they have gone through, to get to this point is remarkable. The fact that it is practically the same group of players is unbelievable.
“We know the National League is going to be very tough but they are going to have two years at it. The first year they will be playing a year up so it will be very, very tough but it will be a good test for them.
“Something I’m very pleased at is that they are all up for it. Their attitude is good, the hunger is there and they want to do it.”
A lot has happened at Phoenix in the past 10 years. From the idea of forming a new youth team from the Rosemount area, to the point where the club now has 10 youth teams from U7 to U17, including a girls' team, as well as two adults teams – does not just happen overnight. It takes dedication, persistence and loyalty, from the coaches and the players involved.
“Phoenix was basically just a Sunday morning pub team, and in 2010 I changed it because I wanted to break away from that tag so we formed Phoenix Athletic,” Christy explained.
“The focus was about developing youngsters coming through the club. The first team we had was in 2013. They went into the D&D and they didn’t win a match for two years, so to see now that the same team basically will be competing against the top teams in Northern Ireland, and to be able to compete and hold their own, I think is remarkable.”
Those initial two years brought its fair share of tests for players, coaches and even parents having to dig deep for motivation in the face of some poor results. The belief remained however, and at a club where progression is more important than results, there was little doubt in anyone’s mind that they would get there in the end.
“We wanted youngsters from the Rosemount area coming through our doors,” Christy continued.
“We didn’t cherry pick, we welcomed players of all abilities. At the beginning we had players who hadn’t played football before and were only starting out or players who weren’t getting on for other teams.
“The six originals at the time – Tom McGoldrick, Callum McDaid, Caleb Canning, Adam Ward, Adam Griffin and Ethan Marley – those six are still with us. Those boys were loyal to us and we have been loyal to them.
“They were going into school and they were getting slagged but they stuck at it and they started to get a wee bit of success as time went on. A couple of other players joined us, which is natural and a wee bit of success.
“The hardest part was trying to keep their heads up and keep them motivated and that was tough going. There were some heavy defeats and their own self-esteem might have been affected but they stuck at it and they worked hard.”
Phoenix are now becoming accustomed to success, both on and field with wins and trophies, and off the field, with a growing reputation as a club of fairness, encouragement and respect. Those values remain vital to the man who helped make this all a reality.
“It never has been and never will be about winning matches,” he said.
“For us it’s about giving them all opportunities to play and bringing them on at levels they are comfortable at. All our coaches work together and we all work together for the players – they are the number one priority. It’s about what’s best for them, not what’s best for the coaches.
“The first bit of success they had was when they won the Division One League and Cup double at U13. We told them then that they deserved to be walking into the school with their heads held high. That really brought them on and they went on to win the U15 league and cup and last year they entered the Harry Gregg Foundation Youth League and they were without a doubt the standout team in that league.
“They played great football, but not just that, referees and opposition that we had never come across complimented the boys on their attitude and their respect throughout the tournament.
They were five points clear and only needed one point to secure the league last season but Covid-19 kicked in and they didn’t get to officially clinch the title. What I’m delighted is that they never moaned or cried about it, they just got on with it and they are looking forward to going into the National League. Their hunger and appetite in training is first class.”

Clear pathway
All along, through the defeats and the setbacks, the goal at Phoenix has been about providing a clear pathway for players to go through the club from a young age right up to senior football. That path is now beginning to take shape at long last.
“The emphasis was always on getting the players through the D&D at U16 and having a pathway from our own club and taking these players all the way through to the men’s game and keep them involved in football,” Christy stated.
“We have stuck to our roots which is providing football for local youngsters. We’ve had opportunities to recruit and bring in other players but we never have. We politely declined because we knew the work that these boys were doing.
“Even when we were accepted into the National League, I was considering trying to recruit but I look at their attitude in pre-season and these boys deserve the opportunity to go and play themselves as opposed to bringing in more experienced and established players. We want to repay their loyalty as we have done since day one.”
A new adventure awaits for Phoenix Athletic, but while the future is unknown, the past and present remain very much in the thoughts of a club that has built consistently towards this day.
“As a club we want to support the Derry & District Youth League which has been very, very good to us,” Christy concluded.
“It’s great from a club development point of view that we have National league football. It’s a great feather in our cap. Ultimately we want to become an Intermediate club for our seniors.
““The fact that we have now got into the National League provides a clear pathway of  progression from 7 years of age to 16 in the D&D, then into the National league then onto our senior teams.
“The ultimate goal is to work with the senior clubs in the town, in particular Derry City, and as a young club, we are doing the right things to try and achieve that.”