Slaughtneil hurling: The building of a dynasty

It wasn't always cups and success for the current Ulster champions 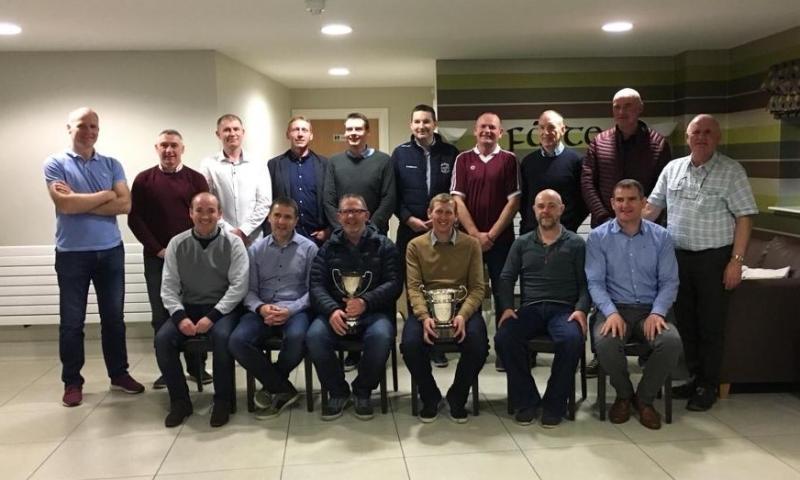 It's Monday, October 24, 2016. Shortly before nine o'clock to be precise. Peter Buzzer's back bar in Maghera is sparsely populated. Apart from the commentary, as Gaeilge, from TG4's GAA 2016 programme humming out of the TV on the wall, you could've heard a pin drop.

It's a Monday club with a difference. There are no boom boxes, no empty take away pizza boxes strewn around the tables nor half drunk people roaring into your ear, while making little or no sense.

Less than 24 hours earlier, two decades of concerted Slaughtneil planning and effort morphed into a slick hunger Loughgiel simply couldn't deal with. By the tenth minute, the maroon and white hooped juggernaut had broken into the orbit of Ulster hurling. Nine points clear and 12 months after the hurt of an extra time defeat by Cushendall, there was no catching them.

In his victory speech, Chrissy McKaigue thanked every man, woman and dog involved in their success. Everyone except Thomas Cassidy, who had passed away days before. He waited until the inner sanctum of a packed Slaughtneil hall later that night, when back among their own.

The Four Seasons Cup was clasped by one victorious outstretched fist. The index finger on his other hand gestured to the hall floor scarcely visible below the throngs of fans, where Thomas taught him how to play hurling all those years ago. There wasn't a dry eye in the house. Even the walls would've had goosebumps.

On the Monday night, his brothers Mark, Declan and Bun (Bernard) gazed at Buzzer's TV with a look and a body language that money couldn't buy. Slaughtneil were at the top of the tree. The new Ulster champions had many helping hands to shape them along the way. But the Cassidys' fingerprints were always prominent. Taking over the mantle of the Kellys, who sowed the seeds in the 1960s.

Mark and Declan seemed like eternal minor managers when, in the beginning, silverware didn't always reward their toil.

On a monsoon afternoon at Kevin Lynch Park, a saturated Bun thumped the roof of the then prefab dressing rooms to the sound of campeones. A team he managed with former minor winner Eoin McGuigan, that included Cormac McKenna and Chrissy McKaigue, had brought home the bacon. It was another building block.

Also seated for that Monday viewing was Dermot Doherty, a selector under Michael McShane who is now running his eye over the minors. The apple doesn't fall far from the tree. His father Barney and the late Eugene 'Babs' Kelly managed the club's 1993 winning team.

It was a fitting reward for Barney's ferrying of average underage teams, year after year, in the back of his blue Mercedes van. Often on the lookout for a 15th player to make up a team that would invariably be on the end of many a hammering.

An U14 shield at a blitz in Dungiven and a South Derry minor hurling final win against Lavey were the modest returns for the effort.

Below it all, another batch was coming to the fore to cut new ground. In 1995, under Thomas and Barney and captained by current minor selector Adrian Quigg, Slaughtneil won their first ever Féile title.

By minor level, with direction from Mark and Declan Cassidy, back to back Ulster minor titles followed, from a group that also won a football title at St Paul's and lost in the final the following year. A generation that also produced current senior football boss Paul Bradley.

Under Thomas' wing, they won the senior title in 2000 before being beaten out the gate by Dunloy in the Ulster final.

It could've been the beginning of dominance, but instead it was a last senior title for 13 years as Kevin Lynch's and Lavey ruled the roost.

Armed with more coaches coming forward, the Slaughtneil underage hurling production line succeeded Ballinascreen's time at the top. No longer was the journey south to the Féile a novelty. It was a permanent fixture in the calendar. With it, came families bonding together and each success inspired the younger teams to follow.

A new wave of minor glory at Ballinascreen's Ulster tournament followed, but Kevin Lynch's were still the standard at senior level. 2012 was supposed to be the breakthrough year. After winning a league title, Slaughtneil's young guns were the pretenders to the Fr Collins Cup only to be sent home with their tail between their legs again by the Lynch's.

It was neighbours Swatragh that took the cup for the first of eight seasons into the Granaghan parish where it still remains.

The following year, under Mickey Glover, Slaughtneil eventually wrestled clear of Kevin Lynch's on their way to glory. In Ulster, their gung-ho tactics and bravery put Loughgiel to the pin of their collar in a moral victory to ascertain the level required. For the next two years they faced Cushendall in Ulster, but again came up short.

All the while the underage production line continued. The Fr Collins Cup was present at one of the underage management meetings, almost as a sign of the level that needed maintained.

With every year, came one or two new players into the squad. The fact that Michael McShane handed Shane McGuigan his senior debut in an Ulster final, while still a minor, was a sign of their commitment to growing the team to a height to challenge the big boys.

McShane built a management team to match the players' ambitions. Every base was covered. Cormac Donnelly came in as trainer. Their games were all analysed. Like the footballers and camogs, the strength and conditioning made them a finely tuned engine. The pre-game routine was planned to the nth degree, so that all the players had to do was turn up and deliver. And they did.

Three Ulsters later and their stature on the national stage has soared. Cuala beat them in the manner Dunloy did in 2000. It was followed by defeat to Na Piarsaigh, a game they surrendered from a position of strength.

How times had changed. In the 1990s, when Tom Magill had Lavey at their peak, just winning a championship game was a challenge. Now, not being happy after putting up a performance on the All-Ireland stage told enough about the ambition.

The Ballyhale game was the greatest statement of intent, taking the giants of club hurling every step of the way. In the physical stakes, they were able to match them and in the skills of the game they were not found wanting either. In an epic, they came so close to the biggest day of all.

This weekend, they enter the knockout championship stage again. They will have the favourites tag. There are no two ways around it. Last week, they saw off Na Magha with virtually a reserve team. Only Jerome McGuigan, suspended against Lavey, started from their All-Ireland semi-final team.

From the days when getting 15 players for a game was an achievement, they have set a standard of skill, attitude and athleticism that the rest of Derry must strive to reach.

Success comes in cycles. In recent times, Kevin Hinphey has followed his father into coaching and led Kevin Lynch's to back to back Ulster minor hurling titles. They have been swimming in Slaughtneil's wake, searching for a return to the top table.

The overall Derry hurling landscape needs them, and others, to narrow the gap. To do so, they will need to match an unrelenting hunger for more success.

When you have had barren years like Slaughtneil, you won't want to step off the perch anytime soon.

Tom Magill: The building of a dynasty

A look back at Lavey's hurling glory days