Share of the spoils at the Joey Dunlop Centre 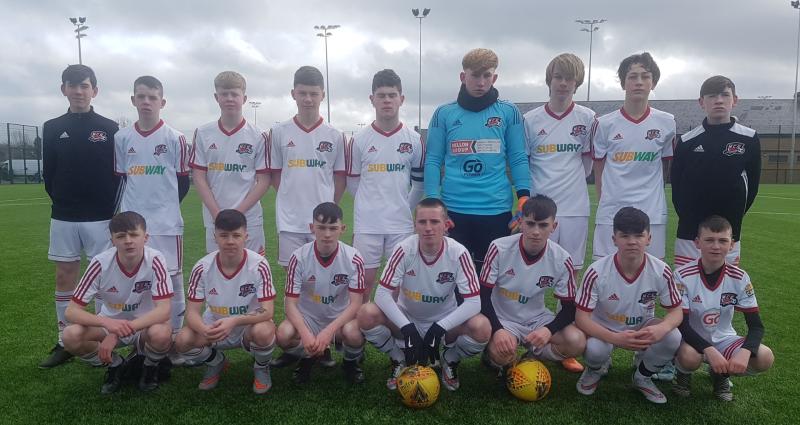 The Maiden City team which faced Ballymoney at the weekend

Storm Jorge was the only winner on Saturday in Ballymoney with the windy conditions causing havoc for both teams defences.
Maiden City's front 6 however was trying to break down a sturdy Ballymoney rearguard all afternoon with wave after wave of attacks from the outset.
First to test the keeper on 10 minutes was Garbhan Feeney who cut in from the left and drove a fierce shot that the Ballymoney shot stopper was equal to.
Bobby Sweeney always looking to get on the ball to make things happen for City was the driving force in midfield feeding the over lapping full backs Feeney and Moore but with the wind really swirling about now it was hard for any player to judge were the ball was going to fall.
Peter Tracey was next to break up an attempted counter attack from Ballymoney on 33 minutes he played in Harrigan who's drive was always raising over the bar.

City now playing with the wind in the second half immediately took the lead after the restart.
Mark Toland with great work down the right beat 2 defenders and put a pinpoint cross onto the foot of Shae Feeney who made no mistake from 6 yards.
From this point it looked like it was only a matter of time until Maiden City scored again only for Ballymoney to equalise with their only meaningful attack of the game. A long ball and a bit of pinball in the box allowed Taggart to lash the loose ball past Farrell to make it 1-1.
Grimley and Melaugh were mere spectators as the City onslaught on the Ballymoney goal was intensifying. With 8 minutes remaining Sean Harrigan fired a low shot towards the backpost which the keeper parried into the path of substitute Dylan McGavigan who finished with a plum only for the referee to adjudge McGavigan was offside.
Indeed it was the lively McGavigan again who in the final minute skipped past the Ballymoney full back who appeared to trip him inside the box only for the referee to point for a goal kick and not to the penalty spot to the dismay of City players.