Adam Liddle was blown away by his first Brandywell experience last week, admitting he had never experienced anything like it before 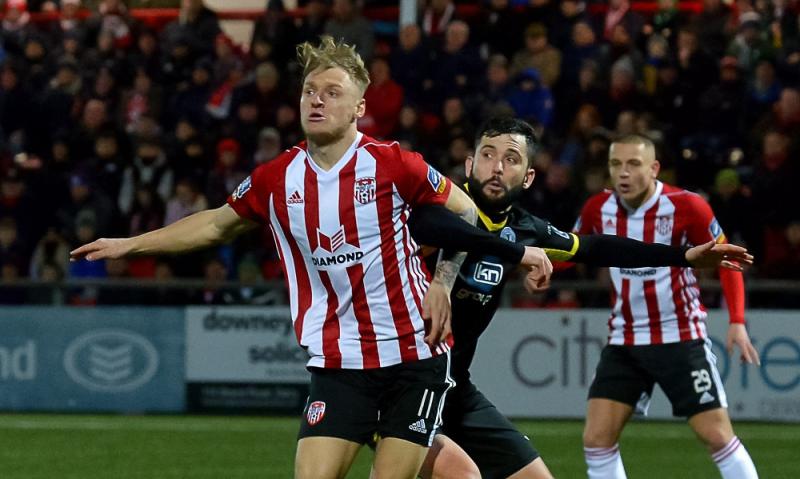 Adam Liddle was blown away by his first Brandywell experience last week, admitting he had never experienced anything like it before.
The 20-year old, on loan from Championship side Reading, is something of a hero to fans already, after he came off the bench to score a dramatic 95th minute equaliser against Finn Harps on his debut.
The goal saved his team a precious point and prevented successive defeats for the first time under Declan Devine, but just as importantly, it has helped Liddle settle into life at his new club. The Brandywell was packed with fans celebrating that equaliser with him and Liddle admits it was a special night for him.
“I'm surprised how many people come down to these games,” he said. “The games are brilliant to play in and the league is brilliant. The crowd was great, you can't hear anything on the pitch which is something I've never experienced before.
“I love it here. I think it's very competitive, it's tough and I think it's just a great place to come and get some first team experience.”
Now Liddle is hoping that his goal against Finn Harps is the start of good times to come in a red and white shirt.
“I’m absolutely delighted to come here and score on my home debut, getting the equaliser in the last minute, is brilliant,” he said. “I was itching to get on just to show what I can do and hopefully this goal will help me to continue to show people what I can do.
Having started the 2020 campaign against champions Dundalk before facing Ollie Horgan’s men last Friday evening, Liddle already knows the life in the League of Ireland is going to be tough, having been thrown in at the deep end.
“The first two games have been tough,” he admitted. “Obviously we know that this league isn’t easy and to be honest every game we play we think is going to be tough for us, so we just have to take each game as they come and hopefully grind out results.”
The 20-year-old is already a fan of team-mate Walter Figueira for his late equaliser, after the ex-Waterford man showed great skill to create the chance.
“I saw him do a lovely piece of skill and get to the byline and I was thinking to get a little bit of movement so that he could cut it back, then I was just thinking to make sure I would get as much connect on it as possible and lucky for me it went in. It was brilliant to go over and celebrate with the fans.”

'More pace'
Meanwhile, Declan Devine wants his players to show more pace in their build up play when they face Bohemians tomorrow night. City were lethargic at times against Harps last week and, to an extant, played into their opponents' hands.
“I think we were slow in our build up play last Friday night, there's no doubt about it, but that's credit to Finn Harps as well as they made it really difficult,” he explained. “We wanted to work down the sides of them and create overloads, but that didn't materialise and I think we got into a bit of a rut in terms of playing slowly, which suited Harps.
“That said, I have to give the players massive credit because into a gale-force wind we were the dominant team and we kept going. The keeper has made a great save before Adam scored and we hit the bar. It was so, so difficult to keep the ball down and play through, but to be fair to the players they kept plugging and kept plugging and I think rightly so deserved their equaliser.”