Bouncing back key for 'gutted' Devine 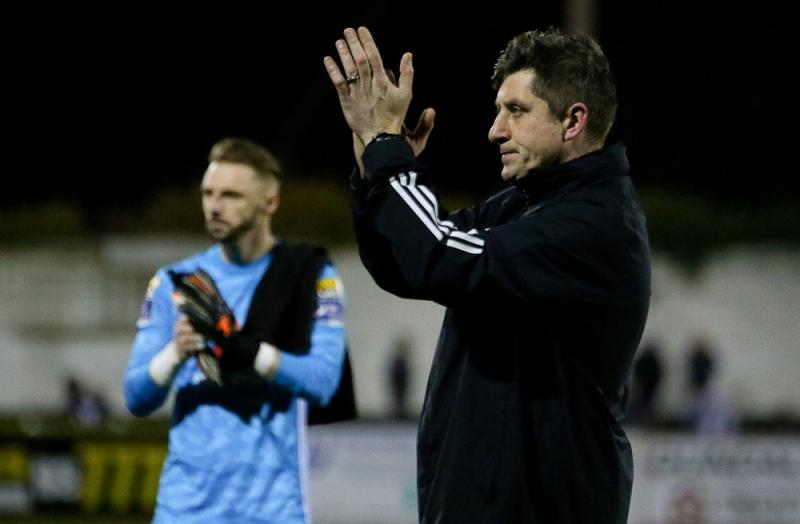 Derry City will not be defined by one result against Dundalk. That is the view of manager Declan Devine who expects his players to bounce back against Finn Harps this weekend.
Last season, the Candystripes lost nine league games in all, but each time hit back with a positive result, picking up six wins and three draws. Devine is hoping to continue that trend this year, starting with the first home game of the season against Harps at the Brandywell.
“We'll not be judged on coming away to Dundalk,” he insisted. “We've got to make sure we win our next game. Last year we didn't lose two in the spin and we've got to make sure we don't do it again this year.
“The players will be grand. The derby game will take care of itself. We have a brilliant bunch of lads and we have a brilliant backroom staff and the secret now is to make sure that we don't lose two games on a spin this year.
“It's key that we do that. It doesn't matter who you're playing, you have to make sure that if you lose a game you get back on the horse and you make sure you don't lose the next one.”
Of the many positives coming from the game at Oriel Park, the performance of the City defenders was one that particularly impressed Devine.
"Danny Lapanu is 19 years of age and is a fantastic player,” he agreed. “Eoin Toal is turning 21 this weekend and is a fantastic player, He was outstanding.
“Eoin Toal has been coming here and playing against Pat Hoban since he was 19. This was the first night I really seen him man up against Hoban. He's played well against Hoban in the past but Eoin Toal was excellent.
"Imagine what Danny Lupano will be like two years down the line. He's a beast of a boy, he's a great lad. He gets forward and defends. He was playing against one of the best players in the league and hasn't put a foot wrong.”

'Gutted'
Defeat in the opening game was not on the cards for Devine, but the City boss is not going to mull over the loss for too long.
"We're absolutely gutted but I want to sit back and reflect over the weekend and we will want to take a lot of positives out of this,” he continued.
"I think we have good players, players who firstly wanted to come to our football club and secondly wanted to improve and that's the key.
“It's the first game of the season. There's 35 games to go and we've got to make sure every game takes care of itself. If we keep getting the same application, the same buy-in and the same desire then we will be alright.”
It is now 14 games since City enjoyed victory at Oriel Park, but despite more frustration against the champions, Devine sees continued progress.
"It's not that long ago every time Dundalk played Derry they were hitting four or five,” he said.
“When they came off the pitch they knew they got a right good game. We had a couple of half chances towards the end to sneak an equaliser but I'm delighted with the signings we've brought to the club.
"There's a lot of disappointed people in the changing room and that shows how far we've come, in such a short period of time."