The Maghera twins are no strangers to running. 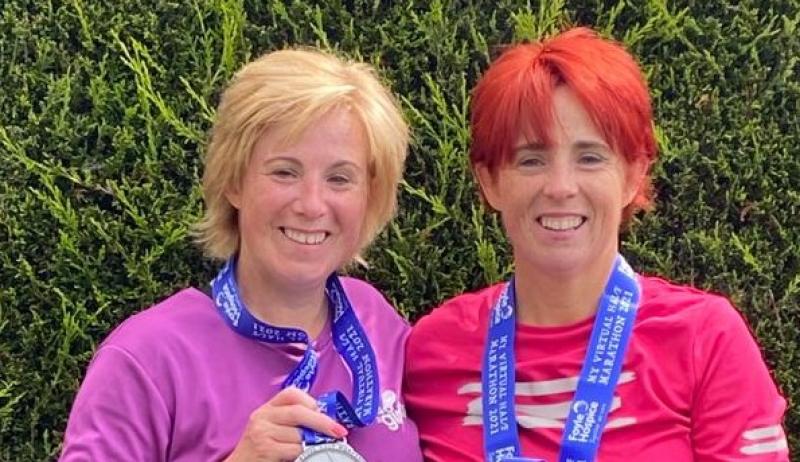 When Maghera woman, Ann Johnston, was standing at the start line of Belfast marathon, her thoughts were with her twin sister Claire who was ready to begin her own marathon in London.

When Ann decided four years ago to take on a new challenge in the form of running, she knew Claire would be her biggest supporter.

You see, Claire is no stranger to running, having undertaken almost 60 marathons to date, including ultras and 24 hour running events, she was only too happy to share her experience with her (slightly) older sister. 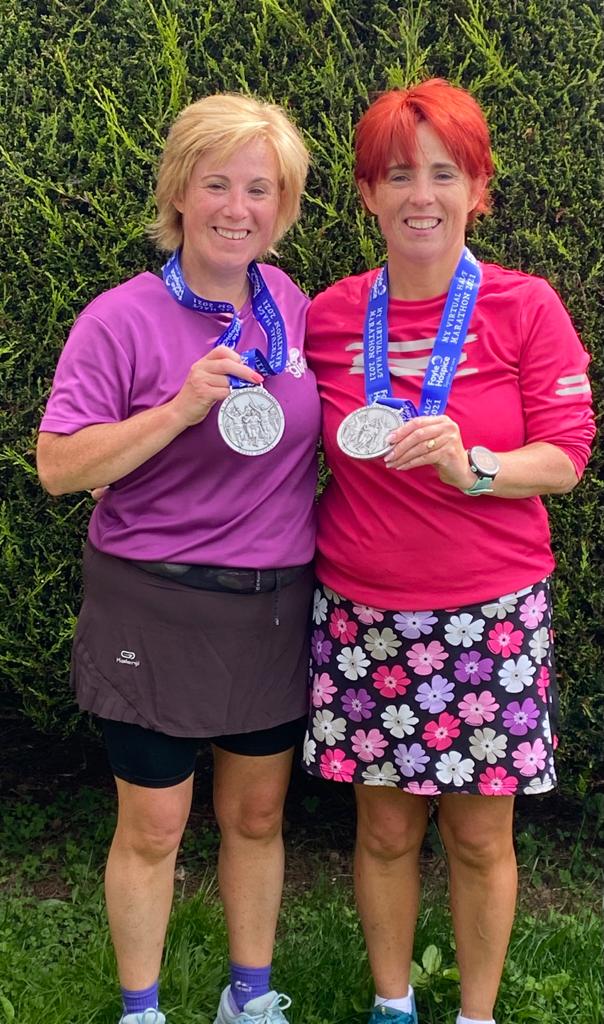 The twins celebrate their achievements.

But that Sunday morning Ann would have to step out in The Deep RiverRock Belfast City Marathon without Claire by her side.. and it seems Claire was more nervous than Ann about that.

Ann, who lives in Maghera said: “I only started running in 2017 when we lost our youngest sister, Julie. I was 49, about to turn 50 later that year. Swatragh playgroup ran a C25K and I joined in with that, that led on to me wanting to run more.

“Claire has been the biggest inspiration, she was always giving me words of advice, even if she didn't realise she was doing it.”

So as Ann built up her miles, and their 50th birthday approached, the twins planned a trip to celebrate. But this wouldn't be a holiday where they needed flip-flops, the pair of them packed their running shoes and Ann ran her very first half marathon on the morning of their birthday, in sunny Benidorm with proud twin sister Claire by her side. 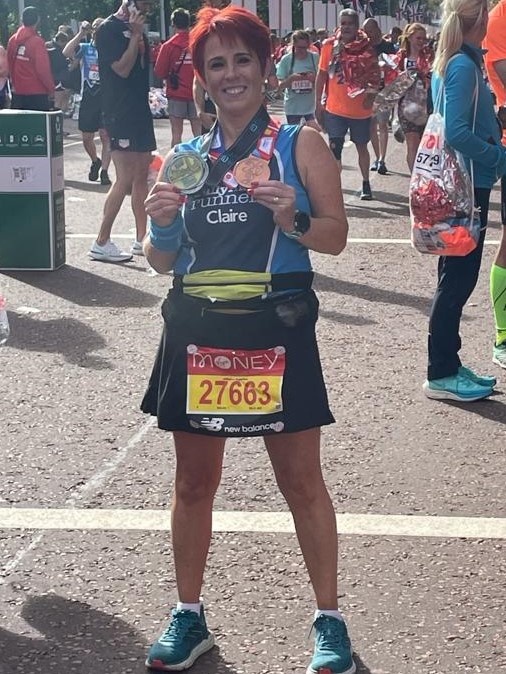 Claire, who is a member of Ballymena Runners said: “We have done lots of 'firsts' together. Ann's first 5k was with me in Ballymena and we did the half marathon at 6.30am on the morning of our birthday – that was an unofficial one, but I was also there when Ann undertook her first official one. That was in Derry, I was her pacer and she was the only person in the group to stay with me the entire way.

“I will never forget it, over the Foyle bridge Ann was right on my heels, I was immensely proud that day.”

So how come on Sunday, October 3 the sisters ended up running in different places?

Claire, a Learning Support Assistant at St Patrick's College Ballymena, explained: “I had every intention of running Belfast, I wanted to be there for Ann's very first marathon, but I had got through to run London in 2015 and a stress fracture ruled me out, so when I had the chance this time I was so happy to do it, and it honestly didn't disappoint.”

Ann, who works in Crawford's in Maghera, said: “At the beginning I had little motivation running solo, so I started doing social runs with other people close to home, as well as track training. I train with Rosemary Hargan but I belong to Termoneeny running Club.”

And when Ann decided she was entering the Belfast Marathon, Claire was only too happy to be her training partner.

Ann said: “Claire did a good few training runs with me, she gave me lots of advice, but above all was to 'smile and enjoy every step' which is exactly what I did. I wasn't nervous until I saw the starting line, then I got a message from Claire and knew she was thinking of me, it really relaxed me knowing she was rooting for me! With my phone in my pocket, it was like she was with me.

“It's never about the times, I just wanted to finish the marathon. I had hit 20 miles at four hours and looked at my watch, wondering if Claire had finished yet.”

Ann pictured after taking on the Belfast Marathon.

Claire added: “I probably overloaded Ann with advice, but she is so laidback I worried she hadn't realised the mammoth task involved in training for a marathon.

“Ann and I both have our set days for training and we don't sway too much from them, but we never ever miss the 'long' runs.

“We did a good few of them together, I'd either go to Maghera or Ann would drive to Cloughmills, we'd run 15 – 20 miles, but when we didn't run together Ann would tell me what she was doing and I'd be messaging her to see how she got on.

“On the morning of the marathon I messaged her from the start line, I genuinely couldn't feel any more proud. I was more worried about Ann than myself, I worried that she'd get caught up in the crowds and have a struggle to finish.

“When I crossed the line myself I phoned my husband, Damien, and he was in Belfast waiting on Ann coming in. I was so happy to know she had the support of him and her whole family, she knew I was there in spirit.”

Ann concluded: “I felt so happy running myself and knowing Claire was fulfilling one of her dreams to run in the London marathon.

“We have enjoyed so many runs together and I know we will enjoy many more – another marathon is definitely on the cards for me, so hopefully we can both be in the same place for it!”

So what advice do the girls give to any budding runners? Or anyone that may think they're 'too old' to start running?

Ann said: “I was nearly 50 when I started running, I'd say do it for YOU, keep turning up, commit to your own training, don't compare yourself to another runner, everyone runs for different reasons – headspace, beating their own personal times, but my advice is to show up and do it for you.”

Claire, who is also a Leader in Running Fitness at Ballymena Runners, added: “The best advice I'd give anyone is to trust your training. The longer runs make you stronger as they build a resilience you'll need in a marathon. Consistency is key, as is good nutrition, that's fuel for your body.”

So as the two sisters recover and plan their next 'long run' they both want to thank friends who offered support and encouragment to them both during their training, their running clubs and their families, who are all very proud of them both and think they're an inspiration.

A coastal route for Termoneeny runners

Springing from coasts to islands

A busy weekend from Springwell