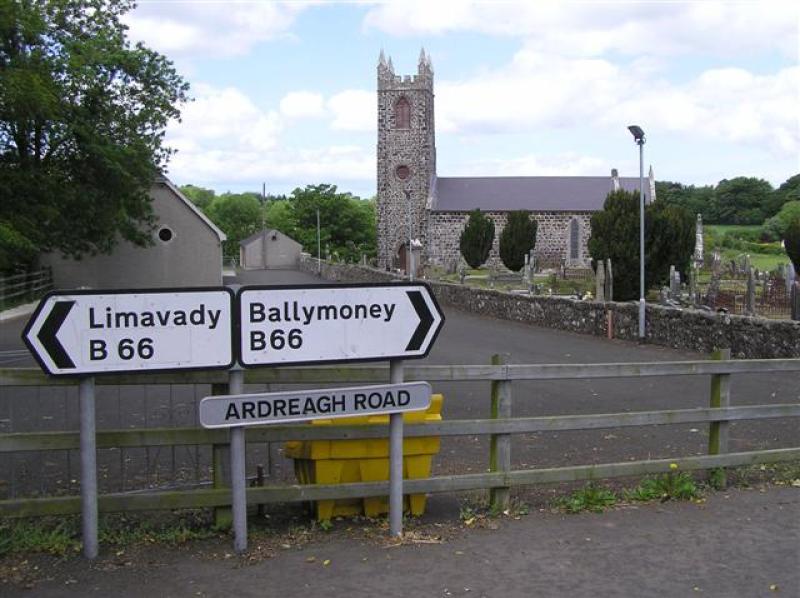 Cllr Adrian McQuillan felt there was a problem with HGVs on the Ardreagh Road near Aghadowey.

Local councillors got the chance to put road issues affecting their community directly to the Department of Infrastructure (DfI) last week.

A deputation from DfI attended last month's full meeting of Causeway Coast and Glens Borough Council to provide an update to councillors and take any local queries.

Representatives took the opportunity to press the Department on road issues affecting their local communities, with Cllr Adrian McQuillan raising questions around the Ardreagh Road, Garvagh.

“There is a section of the road here that is not capable of taking HGV traffic any longer,” he said.

“It's cracked, the sides of the road is cut away. At certain times people can't get out to walk on the road at all because it's too dangerous with HGVs meeting on the road.

“I think it's time to look about putting a weight restriction on that bit of the road and trying to direct the traffic into Ballymoney.”

Cllr Dermot Nicholl followed up on concerns raised last week about the cutting of grass verges in the Greysteel, Dungiven and Limavady areas.

“There hasn't even been a first cut done and there should have been a second cut done,” he said.

“It's sad to hear you are encountering machinery breaking down and bringing outside contractors in. We know every year grass has to be cut and we have to look at it.

“It's small in many cases, but it's big in many ways, and should be addressed more holistically.”

Cllr Kathleen McGurk highlighted problems the potential dangers of turning into laneways between Dungiven and Foreglen.

“I welcome the completion of the recent scheme, but it has raised another problem with people right-turning into properties and laneways along that road,” she said.

“Previously, the hard shoulder would have been available for fast-moving cars to overtake on the left-hand side, but due the footpath being extended into the hard shoulder, that's no longer an option.

“You feel a bit like a sitting duck with traffic coming quite fast behind you, and there's no room to overtake if they haven't left enough room to slow down.”

Limavady councillor Brenda Chivers said constituents in her area had been asking her about the possibility of pelican crossings on the Drumsurn Road.

“I've been asked about the criteria for pelican crossings or ramps on a main road,” she told the deputation.

“We go from a 60mph limit, to a 40mph limit and now a 20mph limit with the school, and then back to the 40mph and eventually 30mph, but everybody just seems to stay at 60mph.

“We did have a SID out and noticed a lot of cars were speeding.”

Councillors had been asked to fill in enquiry forms prior to the meeting, and the Department said they would consider the issues raised at the meeting and on the forms.

A local councillor has criticised the Department of Infrastructure.

The fines are part of a crackdown in environmental crime.
ADVERTISEMENT - CONTINUE READING BELOW