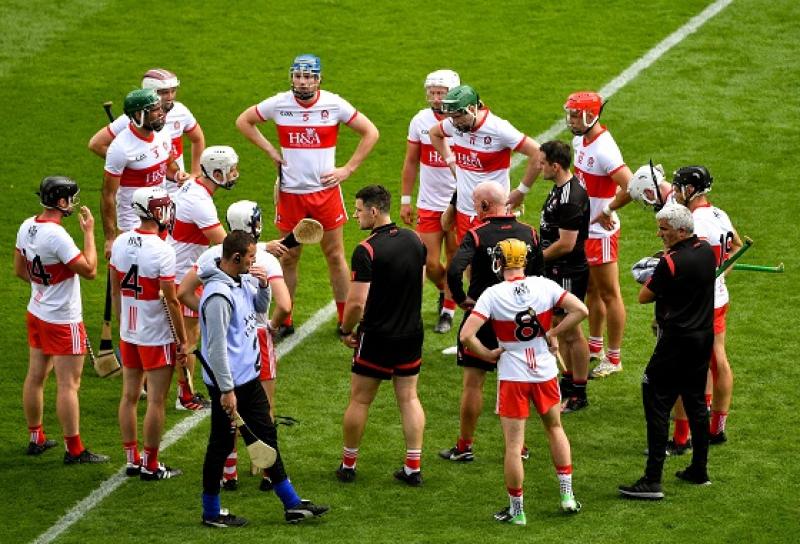 Building the Derry hurling squad is a priority for development. (Pic: Dáire Brennan/Sportsfile)

Three days after Derry hurlers' Croke Park humbling to an Offaly side on a different level, Brendan Rogers teased the rest of the county.  Well, those with a deep rooted interest in the small ball code.

For those of a certain vintage, like myself, it was like failing to score 101 with six darts on TV game show Bullseye and seeing the star prize behind Bully that you could see, but couldn't touch.

Seconds after referee Eamonn Hassan threw in the sliotar on Slaughtneil's win against Banagher, the lanky frame of Rogers had it between the posts with one wave of his wand.

By the eighth minute, he had dropped his shoulder and headed goalwards before rifling to the far corner. With the water break just over, he repeated the dose. Two shots at goal. Two goals. Watching on were Shane McGuigan and Chrissy McKaigue.

Imagine a Derry team with McGuigan at centre-back, McKaigue at midfield and Rogers tearing Division 2B defences to shreds. Three dual inter-county players, and everyone else all clunking in like pieces of a jigsaw.

With the level of football preparation ramped up, such an agreement is nothing short of a pipe dream. Keith Higgins drove Mayo to the Nicky Rackard success after hanging up his boots. In a recent interview with The GAA Social on BBC Sounds he revealed that he was able to play 'the odd game' of hurling when there was a break between rounds of football, with the blessing of the football management.

The split season has condensed the season into what it is now. Wall to wall games. Derry's Aine McAllister is a rare breed, being able to play football and camogie, both in the midfield battle-zone.

Before a ball was pucked in the 2021 season, Derry hurlers' joint-manager Dominic McKinley conceded that being an inter-county dual player wasn't an option. Speaking, also on The GAA Social, Derry football manager Rory Gallagher tended to agree, also pointing out the hurling management's indication of working with what they have got.

Standing in the bowels of the Cusack Stand after Derry's double scores defeat to Offaly, McKinley spoke of the reality in Derry. Elite players will pick football. As for everyone else, the hurling management cannot afford to miss anyone else.

The 2021 season's roster didn't come close. Lavey's Fintan Bradley, the current top scorer in the club leagues, was unable to commit at the start of the season and on his club form, his loss was huge. Eamon McGill is a man you'd want with you in the trenches, but he didn't join up with the panel either.

Derry lost Darragh Cartin to injury in their opening game with Mayo. Kevin Lynch's trio Sean Kelly, Thomas Brady and Niall Ferris opted out of the panel. Derry also lost the experienced Paul Cleary who stepped away from the squad, as did newcomers Noel Rafferty and Niall Doyle.

In a season when Ferris made his return at the outset, to be joined by Gerald Bradley and Brian Cassidy throwing their lot in with the county, on paper, it was the strongest looking squad for some time.

Add in injuries to Conor McAllister, Alan Grant, Mark Craig and with Conor Kelly unavailable for selection. Cormac O'Doherty was baby-sitting a slight knock, but soldiered on.

Derry were threadbare. While Offaly had a number of panellists outside the matchday 26, Derry couldn't even fill their quota. Aside from goalkeeper Conor O'Kane, Cormac Donnelly and Dominic McKinley had five outfield substitutes to call from.

And while often a small core of players will generate a togetherness, the competition for places just wouldn't be there.

It is optional to play at inter-county level and everyone will have their reasons for not committing. But in a county like Derry, with a mere eight adult clubs, everyone has to take a look at what shape the game is in.

There is no secret ingredient to success. It is all about getting a core group of players, with one common goal and purpose. That's the bottom line.

Especially in a county where hurling is a second class citizen. A sport that has been neglected by half the country. Draw a line from Dublin across to Galway. Anything above it is a hurling wilderness. Even Antrim's success in the Joe McDonagh Cup didn't get the respect it deserved.

Outside of the top hurling counties, everyone is scraping for the crumbs from the top table. Offaly manager Michael Fennelly, in his interview after beating Derry, understood counties are afraid of tiered championships. Away from his Kilkenny career where the Cats were always in the spotlight, those below are cut off from the mainstream media coverage.

That's all outside the control of counties like Derry. It's about building your house to as many stories as your resources will take you.

Some turned their nose up at Derry competing at U20 B and Celtic Challenge level as part of the county's underage development plan. For now, that's Derry's level. Kilkenny beat them out the gate in an All-Ireland U21 A semi-final. That's not development.

In an interview after beating Meath on their way to the 2018 Celtic Challenge, Derry selector Ryan O'Neill put his cards on the table. Standing in a dressing room three seasons ago in Inniskeen, he confessed how the victory was a means to an end.

And he's right. I believe there is a strong future for the game in Derry. The U20 and Celtic Challenge campaigns are proof that shoots of hope exist, but nobody hands out a magic formula. If it was, then every county would throw money at the process.

Derry's plan is about bringing together as many young players that want to hurl. If lads wanted to mix county minor football and hurling, that would be accommodated. If not, hurling moved on without them.

The long term outlook was having a group where hurling was a genuine love. And a desire to play it at the highest level.

Three years would bring the guts of 90 players through the process. They'd win games, they'd lose games. But the onus was put on them to go an become the best players in their club teams. There is so secret formula to greatness in the world's most skilful sport. It's time and repetition.

I think of Thomas Cassidy, Tom Magill and Liam Hinphey, with their obsession with building something special. A relentless search doesn't take five minutes.

The likes of St Finbarr's, Ballerin and St Patrick's are starting from close to scratch. Eoghan Rua are picking from a small base and Na Magha need total buy in from a population that could change the direction of hurling.

This the type of conversation that is needed now. For the short term going into next year and aiming for the elusive Christy Ring Cup, days in the future, a thought at what Derry hurling could look like.

The next time a Derry hurling bus pulls into Croke Park, there needs to be more than 21 fit players filing into the dressing room. Dual players aren't the solution. It's about widening the base.

Tom Magill: The building of a dynasty

A look back at Lavey's hurling glory days

Slaughtneil hurling: The building of a dynasty