Oisin Doherty scored 1-9 for the winners 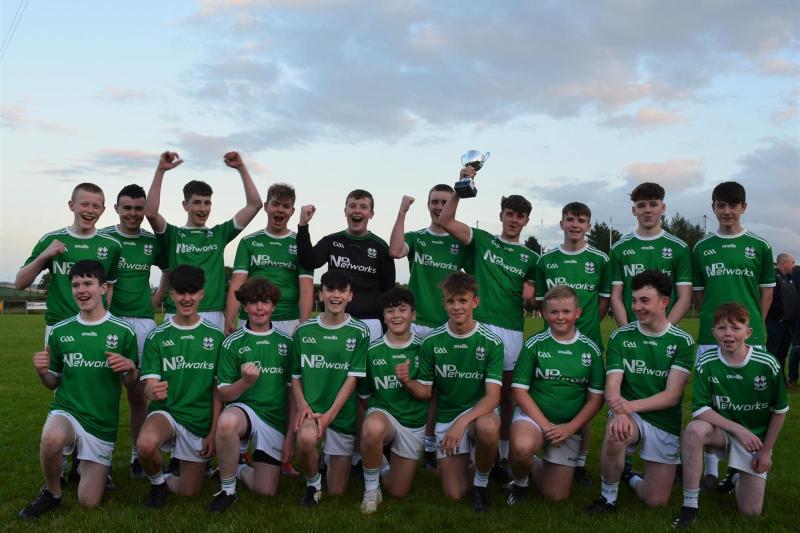 Newbridge celebrate with the cup.

Newbridge capped off a fine championship run with victory over a very spirited Craigbane side at Desertmartin on Friday night.

BA MULLAN AND SONS U15 B2 FINAL

Newbridge 4-18
Craigbane 0-8
The 'Bridge, who had Oisin Doherty in brilliant form at midfield, scored two goals in each half to run out deserving winners.

Despite being 15 points in arrears at half-time, Craigbane battled gamely and made the winners battle for any dominance they had in the encounter.

It was Jonah Agnew-Adams who notched Newbridge's first score of the game before Craigbane enjoyed their first spell of ascendency in the game. They went ahead thanks two points from Pierce McElhinney, one of two players from their U16 winning side a week earlier.

With the wind at their backs, Newbridge began to take control of the game. Goals from Doherty and Fearghal Walls put them 2-1 to 0-2 in the lead. They added a series of fine scores, with the pick of them a sweet Eamon Young point from the outside of his right foot as Newbridge pushed into a 2-7 to 0-2 lead at the first water break.

Craigbane did still manage to forage for enough possession, but were not able to covert it into the scores to hurt their opponents.  Eventually, the Lily Whites got a foothold at midfield thanks to Taidhg Coyle who began to mop up the loose ball.

With further scores, Newbridge went in at half-time holding a comfortable 2-12 to 0-3 lead at the half-time interval, thanks to their midfield dominance with Doherty having a huge say on their impact on the game.

Craigbane started the second half strongly, registering the first point of the half, but two quick fire points from Liam Gribbin settled the ‘Bridge shortly after.

Craigbane had their spell again and helped themselves to scores from Coyle, Cahir Conway and Oisin McElhinney.

As the game went on, a bigger and stronger Newbridge team got on top and began to stamp their authority on the game once again.

Further points from Cathair McBride, Oisin Doherty, and Paddy Bleeks had the winners firmly in the driving seat.

Craigbane, to their credit, battled gamely to the end despite being under the cosh against a fancied Newbridge team.