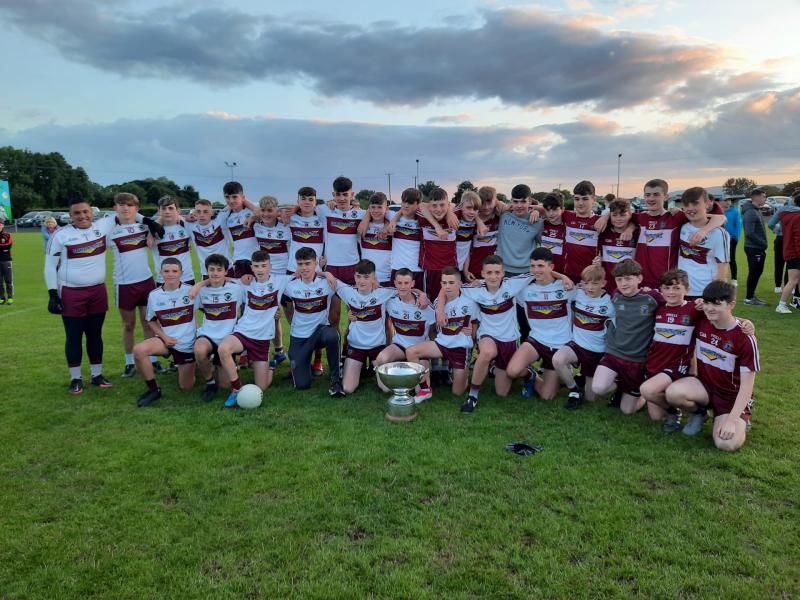 The winning Ballinascreen team with the Colm P Mullan Cup.

A blistering start to both halves saw a well-drilled Ballinascreen overcome Slaughtneil to add the U15 title to their U14 championship last season.

BA MULLAN AND SONS U15 A FC FINAL

Ballinascreen 4-13
Slaughtneil 0-9
Ballinascreen scored 7-12 against Glen and 3-7 in their semi-final win over Bellaghy and came into the final as the form team.

The Emmet's followed up their win over Greenlough in the Quarter-Final with victory over a fancied Lavey side who had previously ousted Magherafelt.

In perfect conditions at Castledawson on Friday night, Ballinascreen put on a fine display of football, playing with their heads up and always looked for the kicked option, with keeping the ball as their plan B.

'Screen had size at midfield and on Gabhan McIvor they had an excellent reader of the game in defence, while up front their inside trio of Murray, Boyle and Quinn gave Slaughtneil plenty to think about, bagging 3-10 of their side's total on the night.

The winners were out of the blocks with a goal in the third minute.  Ger Dillon and John Boyle combined well to play Shea Murray who finished low at Jack McCloy's near post.

It was the powerful start that allowed Ballinascreen to play the ball on their own terms as Slaughtneil were under pressure to get out of their defence.

Shea Murray added a point and 'Screen were 2-2 to 0-0 ahead after four minutes and it wasn't until Cahal McKaigue took a mark at midfield that Slaughtneil got a chance to regroup.

Deaglán McNamee kicked two frees to get Slaughtneil on the scoreboard, but back came Quinn with another score on the turn.
McCloy then drilled a kick-out in the direction of Fionn McEldowney, who poured every ounce of energy into the game.  His pass found McKaigue who curled over a sweet score with his left foot after a run, but it was the Emmet's only score of the night from play.

Just as they settled, 'Screen flicked the switch again and when Ben Mallon's pass found John Boyle, he grabbed the game's third goal.

A thumping effort from midfielder Michael Walls had Ballinascreen 3-5 to 0-4 ahead at the first water break.

Slaughtneil moved Odhrán Donoghue back to pick up Brian Quinn and brought Barry Óg Mac Ainmhire into their attack.

In a low-scoring second quarter, Slaughtneil missed two frees that would've had them back in the game. McNamee and James McKenna then found their range from frees as Ballinascreen went almost 15 minutes without a score until a Boyle free made the half-time score 3-6 to 0-6 in their favour.

As they did in their semi-final win over Lavey, Slaughtneil's management brought goalkeeper Jack McCloy to full-forward at the start of the second half, with Cathair O'Boyle coming in between the posts.

McCloy almost grabbed a goal in Slaughtneil's first attack, but his flick brought a breath-taking diving save from goalkeeper Ciaran Murray-Williams before the ball was cleared and somehow didn't cross the line.

It would've been the start that Slaughtneil needed, but it was Ballinascreen who put the game to bed with a fourth goal from John Boyle. The skipper epitomised the Ballinascreen workrate, dropping back to pick up balls around midfield. Boyle had a chance of a fifth goal, but his volleyed effort was blocked on the line in a rampant third quarter that saw Ballinascreen lead 4-11 to 0-9.

McNamee hit Slaughtneil's first score of the half, but it was soon cancelled out with a Quinn point after Shea Murray's effort came off the crossbar.

Cathair O'Boyle made a fine save in the Slaughtneil goals in the final quarter, but it was Ballinascreen who had a firm grip on the game and ran out deserving winners.

Next Thursday's C Final will be between Claudy and Lissan. Claudy came through a 4-14 to 5-10 classic against neighbours Foreglen on Wednesday night and Lissan were 4-16 to 3-6 winners over Ballerin.

Oisin Doherty scored 1-9 for the winners

The final Tour de Force - a tribute to Karl McAuley

Friday will be the last ever Derry U16 final