All six forwards get on the scoresheet 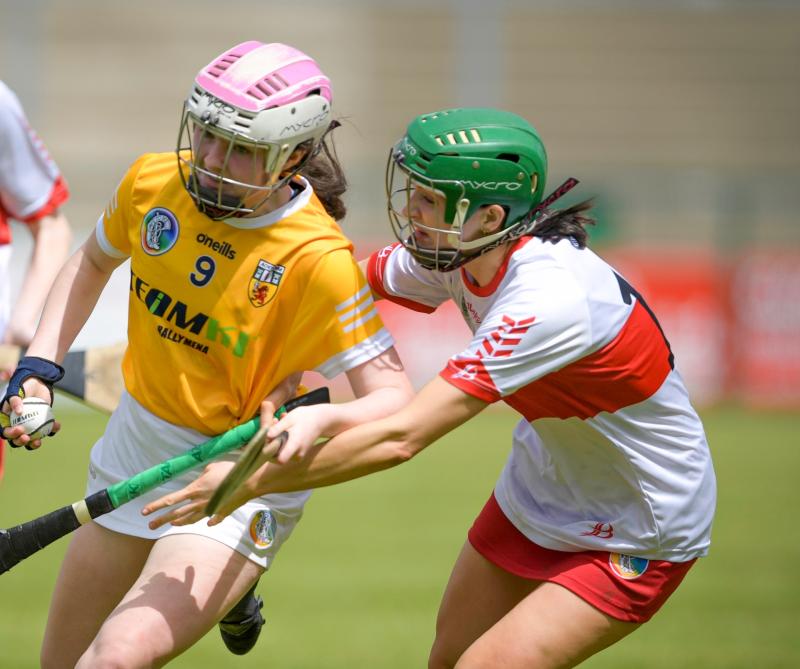 Derry camogs finished their group with a 100 percent record and topped their group after a strong second half to see off Tipperary on Saturday at Owenbeg.

Derry camogs finished their group with a 100 percent record and topped their group after a strong second half to see off Tipperary on Saturday at Owenbeg.

It was an even game, with teams exchanging scores until Eimear McGuigan put Derry two points clear, 0-9 to 0-7, before half-time.

The home side led by three points at the break. When Tipperary ace Jenny Grace nailed her sixth score of the afternoon in the 41st minute, Derry held their opponents scoreless for the rest of the game before Aoife Shaw's goal capped off a deserving win.

The heavens opened before the game, but Owenbeg's surface held up well and Derry played some great camogie in wet conditions.

All starting forwards scored and Aine McAllister was central to their play through midfield. In Caoimhe Glass, Cliodhna Ní Mhianáin and Louise Dougan, their defence had a strong spine.

Therese Mellon sped down the wing before slotting over a nice score from a tight angle in the second minute, but Jenny Grace and Deirdre Dunne replied with points to put the visitors ahead.

A Dervla O'Kane point, after great work from Maria Rafferty and Aoife Shaw brought the sides level before Grace fired over twice to give Tipp a 0-4 to 0-2 lead after eight minutes.

Two McAllister points, with the first coming from a pass from Glass, had the sides level. Sinead Meagher nosed Tipp ahead before a Maria Rafferty score brought the sides level at the first water break after Louise Dougan and Megan combined.

A McAllister free had Derry ahead for the first time in the game, but Grace had the visitors back in front, 0-7 to 0-6. Derry did have a half chance of goal, but when Megan Kerr missed her connection, Shaw picked out a neat pass and Shannon Graham brought the sides level.

Dervla O'Kane, Eimear McGuigan and Therese Mellon hit three points from play to help Derry on their way to a 0-11 to 0-8 interval lead.

Early in the second-half, Derry turned up the intensity. Blocks from Dougan, Mellon and Eimear McGuigan set the tone for a performance steeped in workrate to go with Derry's ability to score from across the team. The sight of Aoife Shaw putting pressure high up the pitch added to the Derry mix.

By the end of the third quarter, Derry had translated their effort into a 0-13 to 0-9 lead and looked comfortable.

With five minutes to the break, the Derry effort was rewarded with a brilliantly engineered goal. Aine McAllister intercepted a ball on the wing of her defence. Orla McGuigan cleared the ball down the wing. Therese Mellon was involved before Dervla O'Kane's pass was caught by Aoife Shaw. With her back to goal, she turned her marker before slotting inside the post – the same one that denied her earlier in the half – and into the net. The ultimate team move.

To cap off Derry's performance Shaw made a point for Dervla O'Kane before substitute Mairead McNicholl got in on the act with the final score of the game.

The Oakleafers face Wicklow next Sunday
ADVERTISEMENT - CONTINUE READING BELOW