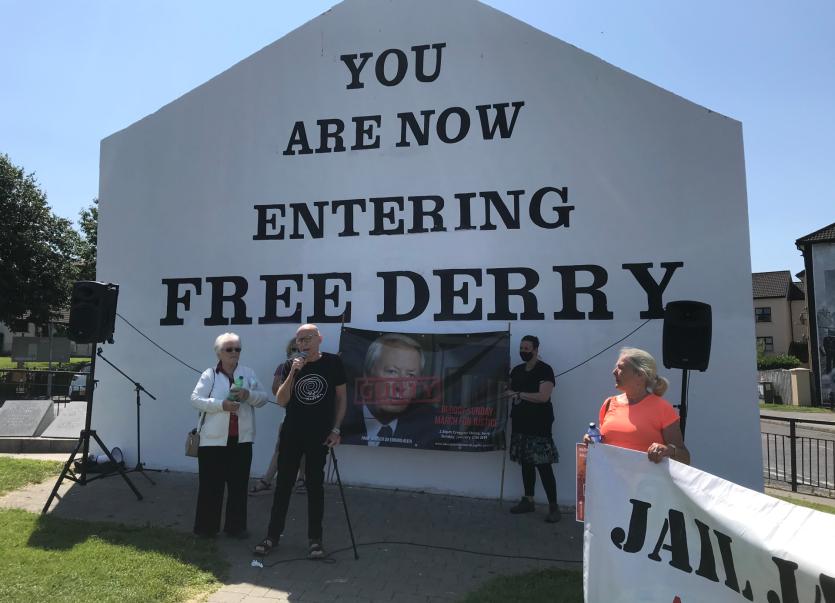 A protest was held at Free Derry Corner this afternoon over British government plans to bring in a Troubles 'amnesty'.

Northern Ireland Secretary of State Brandon Lewis this week outlined plans for new legislation which would end the possibility of prosecutions in relation to Troubles-related offences committed before the signing of the Good Friday Agreement in 1998.

The 'amnesty' would apply to all paramilitaries and members of the security forces.

However, the proposal has been condemned by every political party in Northern Ireland and many families of people killed during the Troubles.

Among those who spoke at today's protest in Derry was Liam Wray, whose brother Jim was killed on Bloody Sunday.

Mr Wray said the British government was trying to bring in the new legislation because they were 'frightened' that the 'truth' would be exposed.

“This attempt at stopping prosecutions is not to bring an end to what is happening in this country, it is to cover their asses and that's the way to put it,” he said.

“It is up to us to say quite clearly to our politicians, it is not a talking shop and this ain't up for bargain.

“The only way if we are ever to get the full truth, because we know the truth from our side, is the exposing of the military and the security personnel and the only way you are ever going to get that is if you bring them to prosecution.”

Veteran campaigner, Eamonn McCann, told those attending today's protest that the British government's 'amnesty' proposal would have a huge impact on victims' families' campaigns for justice.

“Make no mistake about it that this will be the end of the legal route, the legal remedy for Bloody Sunday,” he said.

“There is nowhere else to go.

“All that has taken place. It has been a tumultuous journey and an awful lot has happened.

“And people who have been looking for something which will end this, draw a line under it, move on, this is what it means. I think we should all speak with one voice now and say to the British authorities no we are not moving on. We do not care what you offer us in terms of positions in the future or any sort of bribes of an economic or any other basis.

“To tell them that we are not moving on. Here we stand.

“We should let them know that we are going to keep right on until the end of the road.”

Speaking at today's protest, Kate Nash, whose brother William was killed on Bloody Sunday, urged people to write to their local politicians and other prominent figures to highlight their opposition to the 'amnesty' proposal.