Derry put out another statement of intent in the promotion race 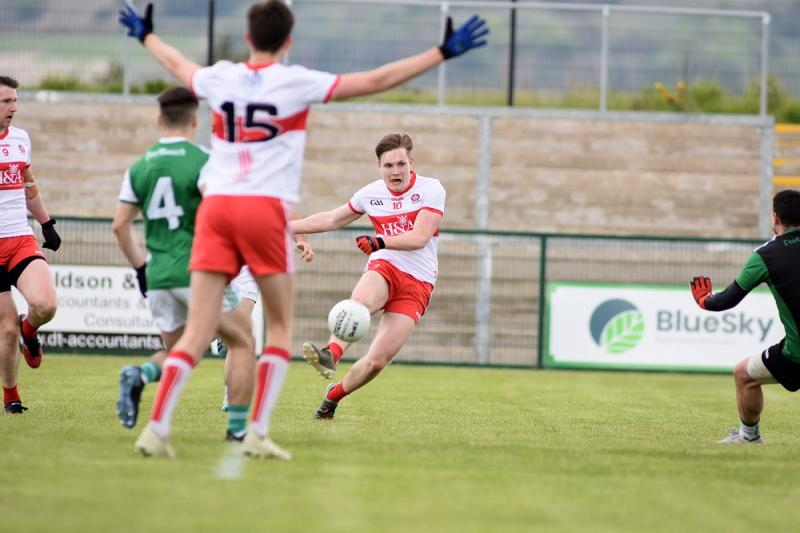 Derry made it back to back wins with 19-point victory over Fermanagh on Saturday night at Owenbeg.

Rory Gallagher's men have one foot in a promotion semi-final with a chance for the county to climb back into Division 2 for the first time since 2017.

It was a marker and an exhibition of counter-attacking football. Derry pulled themselves wide, using every inch of Owenbeg's expansive surface and attacked Fermanagh relentlessly down the middle.

At midfield, Derry totally dominated the visitors' kick-outs in the first-half.  It was like the win over Longford all over again.

Their tally of 4-12 from play will have been another pleasing point for Rory Gallagher.

However, it was Fermanagh who hit the ground running early with a Ciaran Corrigan point, with Tiarnan Bogue doubling the lead as Derry's early kick-out routine was jittery.

Shane McGuigan got the home team off the mark before Derry crashed into action. After a period of keep ball, the rampant Ethan Doherty burst clear before hammering to the top corner.

McGuigan, Heron and Glass were all on target for Derry as they went into a 1-7 to 0-5 lead. Fermanagh were hampered by the loss of Eoin Donnelly after injury.

A thumping Ciaran McFaul point had Derry on the scoreboard early in the second-half, before the floodgates opened with four second-half goals.

The first one came after Stephen McGillion coughed up a cheap ball at midfield. And when Ethan Doherty superbly rode a tackle, he gave it to McKinless on the overlap who cooly slotted to the net, ending the game as a contest.

When Josh Largo-Ellis hauled Ciaran McFaul down and was sent to the sin-bin, Shane McGuigan slotted home the resultant penalty.

It was walk in the park material this point, with the voice of Rory Gallagher still urging his troops to keep their foot on the gas.

McGuigan added a second goal from play and Niall Toner bagged a fifth to put Derry odds on to pick up a semi-final spot.

Derry will complete their group games next week with a clash with Ulster champions Cavan in Kingspan Breffni Park on Saturday afternoon at 3.00.