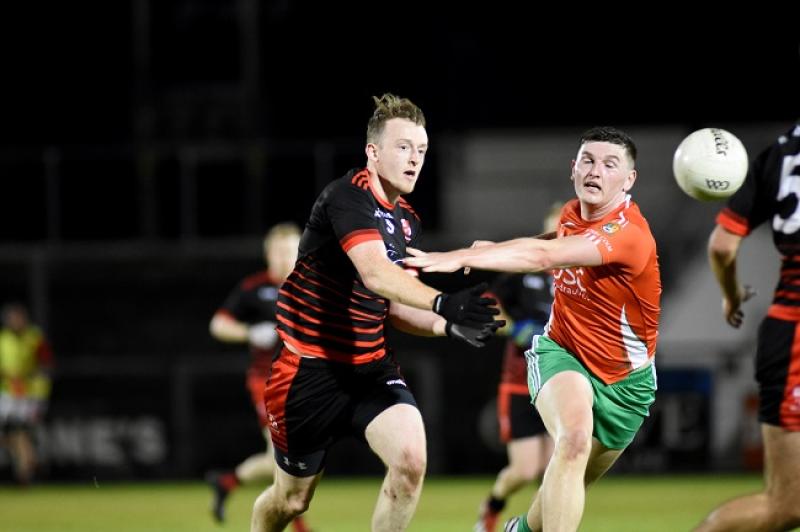 Action from Drum's clash with Magilligan in the 2019 championship. (Pic: Mary K Burke)

A look back at the game from Derry club action in Division 2.

Magilligan 1-12
Drum 0-13
Despite playing with 14 men for more than three quarters of the game, Drum stayed in contention until the final whistle at home to Magilligan on Friday night.

Dual player Niall Ferris saw red inside the opening 10 minutes for a foul on Ryan Barr. Already without Liam and Shane Millar plus Damian Brolly, the the home side gave as good as they got for the remainder of the game.

James McCartney and Micheál Farren gave Drum the edge at midfield, but they lacked the clinical finishing of the winners inside men Payne and Mullan.

Drum were trailing 0-7 to 0-2 coming up to half time when a brace of Ryan O’Kane points gave them a lifeline.

The home side had cut the deficit to a point at the three quarter stage when James Payne got what proved to be the match winning score, beating Cahir O’Kane from close range to open up a four point lead.

With Ryan O’Kane and recent All-Ireland minor winner Caolan Hazlett leading the way, Drum cut deep into the Magilligan lead and in a frenetic finish it could have gone either way, with the last score of the game fell to Drum’s teenage half-back Jack Moore.

This was Magilligan’s fourth win of the campaign while Drum remain second from bottom.

Desertmartin 1-21
Ardmore 0-7
Desertmartin continued their winning run against an Ardmore side who gave a good account of themselves.

The final scoreline was rather harsh on their efforts, with Desertmartin leading 0-8 to 0-4 a half time.

It wasn’t until they tired in the last quarter that the faster St Martin’s took a firm grip on the game and scored almost at will.

The ace of Eunan McElhennon up the right wing from half back was something that the St Mary’s could not handle. He found the target six times, with five coming from play.

Substitute Conor Kelly hit the only goal of the game late on. For the second successive game, Desertmartin had their three All Ireland minor winners on board. Lachlan Murray followed up his seven points against Limavady on his debut with another three in this game.

Dolan’s joined Pearses and Magilligan on nine points around mid table with a six-point victory over St Canice’s.

The winning of the game came when leading scorer Odhran McKane was introduced from the bench and hit six points to bring his total for the season to 3-34.

Ballymaguigan's game with Doire Colmcille was postponed. Glack's game with Limavady has been refixed for Tuesday, August 17, with Craigbane's clash with Moneymore not taking place on Saturday, August 28.

Doire Trasna were 1-19 to 1-11 winners over Ardmore in Tuesday's refixed Round 2 at Trasna's new pitch in Lisnagelvin.