Saturday's showdown will tell much about the promotion race 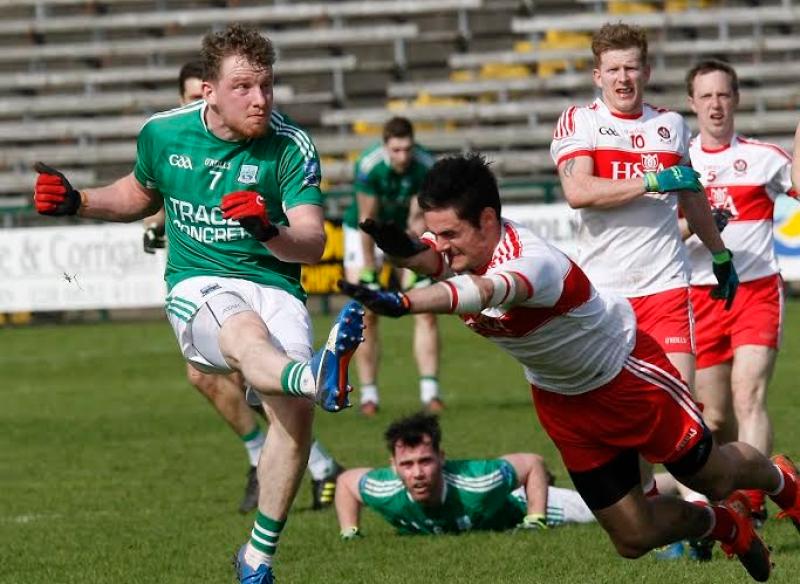 Derry and Fermanagh's opening games couldn't have been any more different, but two points are two points. And in Division 3 North, any win is a golden nugget.

Derry suffocated the life out of Longford and the game was over long before Jerome Henry sounded his final whistle. But on planet Derry, it was a brilliant start against the ultimate bogey team. And cast the mind back to Celtic Park last year and a mixture of emotions. A dropped point in a home draw with Leitrim in the first game, with the relief both weren't dropped.

Fermanagh's win over Cavan was totally different. The sides were level 10 times in an arm wrestle.

Much was made of the loss of the Jones, Corrigan and Cullen brothers, but Sean Quigley's exhibition of kicking points was a joy to watch.  And there was a steeliness about them to back it up.

For much of the game, Fermanagh were living on scraps. Ciaran Corrigan's shot early on was from the sideline. Quigley was kept outside the attacking hot spot. But the one beauty he notched came after Corrigan's diagonal ball unlocked Cavan. But, only lively debutant Conor Love, after he took a pass on the loop, curled over from a comfortable range.

Their first-half was the story of Johnny Cassidy and James McMahon. Cassidy wore number three, but weaved much of his attacking magic from the wing, with Kane Connor back at full back. Cassidy's runs were on a par with what we have come to expect from Brendan Rogers.

McMahon was calmness personified on the ball. But another key was how Fermanagh defended. Two balls were won by Martin Reilly in the danger zone.  Apart from that, the blue jerseys were shepherded to the wings.

When Cavan went down to 14 men, Chris Snow began to work his kick-outs to find the extra man.

In the second half, Fermanagh had a greater cutting edge about them. James McMahon ghosted in to win a close-range free, Darragh McGurn plucked a ball from the clouds before swinging over the bar and then there was Sean Quigley's pass. It took out the entire Cavan defence before Eoin Donnelly's goal chance pinged off the post and Cavan went up the field to level the game.

Fermanagh lost Corrigan for the last ten minutes to the sin-bin. They didn't flinch. Tiarnan Bogue made an inspirational fetch at midfield. Substitute Richard O'Callaghan got hands on a vital ball in the melting pot, as did Corrigan when he came back on.  You can't buy desire.

Ryan McMenamin has made one change for Saturday's game, with Ryan Breen coming in at corner-back for Cian McManus who was replaced in the first-half last week.

Derry are unchanged, as they try to lay the foundations of a team that are going to stick together.

From watching both games last week, they played the same brand of football. A trimmer version of Sean Quigley was back around midfield when Fermanagh pulled everyone back without the ball.

Derry did the same in Longford, with a wave of men flowing back and forward, depending on the phase of the game.

Are Rory Gallagher and Ryan McMenamin defensive managers? They're no different than anyone else playing the game at the minute.  Welcome to football as it is.

Longford goalkeeper Paddy Collum wasn't allowed to work any short kick-outs, as Derry pushed tight. It was the packed middle third where they made hay. Their desire to win the ball was evident anytime they lost primary possession.

On the one occasion that Longford's Rian Brady got more than a metre of space, Gareth McKinless picked his pocket before he could pull the trigger.

Looking for holes in a comfortable 16-point win, you'd have to look at a lack of composure in a first-half where Derry should've buried Longford.  But kicking points in a monsoon is far from simple.

Saturday will be a step up in every way.  Fermanagh are not Longford. The desire they showed against Cavan was an embodiment of McMenamin himself in his pomp.

While there are subplots, the Gallagher family ties, Rory and Ricey, a former Derry coach and Director of Football plotting the Oakleaf downfall, the real story of Saturday will be the battle inside the white lines. And it will be a battle.

Fermanagh always relish playing Derry. The 2012 MacRory Cup Final. The semi-final a few years back when Dom Corrigan hustled Maghera before his unleashed a footballing masterclass in the final. The Derry minor team tipped for an All-Ireland, dumped out by Fermanagh at Celtic Park.  There was Barry Owens' winning goal at Omagh in 2008.

Derry must force Sean Quigley to places on the wing where he doesn't want to go and have him limited to pot shots.  Some will still fly over the bar, but keeping him out of the centre is a must. His pass to Donnelly was a warning shot Derry needed.

It could be a job for Gareth McKinless to keep tabs on him if he plays away from the square, leaving Chrissy McKaigue on Tiarnan Bogue and Rogers inside on Darragh McGurn.

Then you have the midfield hub and Glass going up against Eoin Donnelly, with the chance to put in back to back performances. That's the consistency factor across the board Derry are craving for.

A glance at Kerry's pummelling of Galway, pointed to the value of the link man.  Yes, the Cliffords and Killian Spillane were awesome, but Dara Moynihan was David Moran's outlet to pull Galway's defence out of their shape.

In terms of Saturday, that's where Ethan Doherty, Josh Largo-Ellis, Ciaran McFaul and Ciaran Corrigan fit into another key battleground.

Before the Longford game, Rory Gallagher spoke of Derry's need to develop a winning habit, grabbing victory in games that matter. Relegation battles. Promotion showdowns. Games like this one.

Winning in Longford was a start. Before a ball was kicked, I felt if Derry took two points out of Pearse Park, they'd get promoted. Looking back, it was an emotive enough statement.

Watching Fermanagh win those last three dirty balls to beat Cavan tell me a different story. Saturday is the biggie, a game where you need to find a way to win.  By any means necessary.

Having winning minor teams and a conveyor belt is all well and good.  Grit is way more important in the battle for the next golden nugget.