Sideline View: Be careful what you wish for

Don't throw the baby out with the bathwater 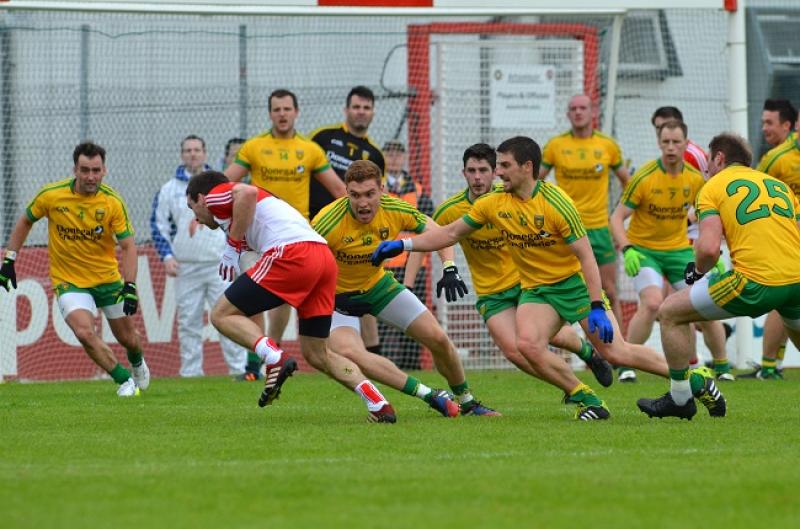 If I could I'd build a wall around old Donegal,
The north and south to keep them out, by God I'd build it tall,
Casinos, chicken ranches, I'd legalise them all,
We'd have our own Las Vegas, in the hills of Donegal.

You don't miss anything 'til it's gone. If it wasn't bad enough experiencing Ciaran McCabe's goal once, TG4 - with their terrific coverage - made us sit through it once again.
At the time, our reign as All-Ireland champions was a short one. One game later, the dream was over. No back door. No second chance. Nothing.
In terms of the GAA nostalgia rollercoaster, our thrill lasted just over a week. After watching a re-run of the 1993 All-Ireland final, Derry Gaels rocked up on the sofa a week later for a full showing of the 1994 opener with Down.
McCabe's goal was like a knife though the heart. One minute Derry had a puncher's chance of keeping their hands on Sam....seconds later they were lying on the canvass, seeing stars.
I remember the journey home from the game that evening. The majority of the packed attendance at Celtic Park all had to travel home through Dungiven and the tailback of cars and looking at the Down bus, almost vibrating in song, in front of us, only added to the pain.
This brought back all that hurt again.
Looking back, the decision to put Gary Coleman on Mickey Linden may have been the wrong one. But it's too easy to say it with hindsight. Kieran McKeever would've been the obvious choice, but what was apparent from watching the game again was how much room there was in the Down attack.
Greg Blayney pulled Henry Downey out of the centre. He is not going to be a player you will allow to drop off and in absence of anything that resembled a sweeper, the middle was open. And Down made hay.
Who really could've marked Mickey Linden that day, in the pattern of how the game unfolded. John Kelly got toasted by Joe Brolly and Pete McGrath whipped him off. But by the time Paul Higgins replaced him, Down had got to grips with the game. The early ball began to dry up. The same can't be said for the other end.
Also, don't forget how much of a factor hurt can affect a game. Down came off the back of the 1993 hammering in Newry. A real humbling defeat. There was always going to be a kick.
But to be fair to Down's County Board, they stuck by their man and the Rostrevor man masterminded a second Sam Maguire in three years.
Derry would've won more All-Irelands if there was a back door....possibly. Donegal and Tyrone, their 1995 model, can also make cases.

The other discussion since Sunday, has been the style of play. For 26 years, the showdown has been put up on a pedestal, as one of the best games of all time.
It was probably held is such high esteem because of the magnitude. The All-Ireland champions opening their defence against another leading contender and Celtic Park was packed to the straps.
In the last few days, the game has been loved and loathed with equal measure. The purists were salivating over it. The modern football folk were tearing it to pieces.
The 'kick the effing thing in' has been replaced by the 'keep the effing ball' outlook
For me, it is somewhere in between. But I just can't get the haters, who were slating players for kicking shots into blocks, down the throats of defenders and out over the line.
It was frantic and that was all of the attraction. Two teams going to war with everything at stake.
Down won because they had more movement in their attack and utilised it.
As Goats Don't Shave sang in their anthemic number about building a wall around Donegal's hills: 'By God I'd build it tall'.
Look at the photo above, as Donegal suffocate Benny Heron in possession in the 2014 championship opener. You can just about see Gareth McKinless behind the yellow wall.
Defensive football can win games, but it is a stop gap. It's for teams looking for a quick fix or a new manager looking not to get hammered.
Dublin and Kerry. They are not behind the door in their use of the dark arts, but they are aristocrats of football. So too are Galway. They always continue to evolve and they always entertain.
Ulster has drifted off the pace in my opinion.
Jim McGuinness broke football into a million pieces, before building it all back together again. In a model that he wanted.
It was successful because he knew how it would work for him. He is totally different, he knew what he was doing. The problem with football is those who try and copy him, but can't.
How many managers out there have tried to play the Donegal way, but can't. Simply because you need finishers and you need energy. You can only play the way your players will allow you to.
When Jack O'Connor came into the Kerry job, one of the things he did was meet a prominent football man in a hotel in Dublin, to delve into drills on turning over ball. They needed something to break free of the Tyrone stranglehold.
It has now gone full circle. We should be sending a delegation to Dublin, Kerry and Galway to see if we can turn brawn into brilliance.
There was nothing wrong with Ulster football in the 1990s. In fact, I feel the early noughties was when the game was in its healthiest state.
The 2002 All-Ireland final was one of the best I can remember. It was a game that hung in the balance until the end, there was physicality and Aidan O'Rouke's diagonal balls to Ronan Clarke and Stevie McDonnell.
Later in the decade, Jack O'Connor's deployment of Kieran Donaghy pulled all the pieces of the Kerry attack together. Gooch and Declan O'Sullivan now had someone to play off.
It was a cross between possession football and leathering it forward early, with the intelligence to know the difference. Just like Ciaran McCabe's goal. An early ball and a support run timed to perfection.
Don't throw the baby out with the bathwater and build walls. Get coaches to coach and...please give us more drama.

- Lockdown, nostalgia and time to listen to the voice of the past.  More...