SIDELINE VIEW: Listen to the sporting voice of the past

The importance of keeping records 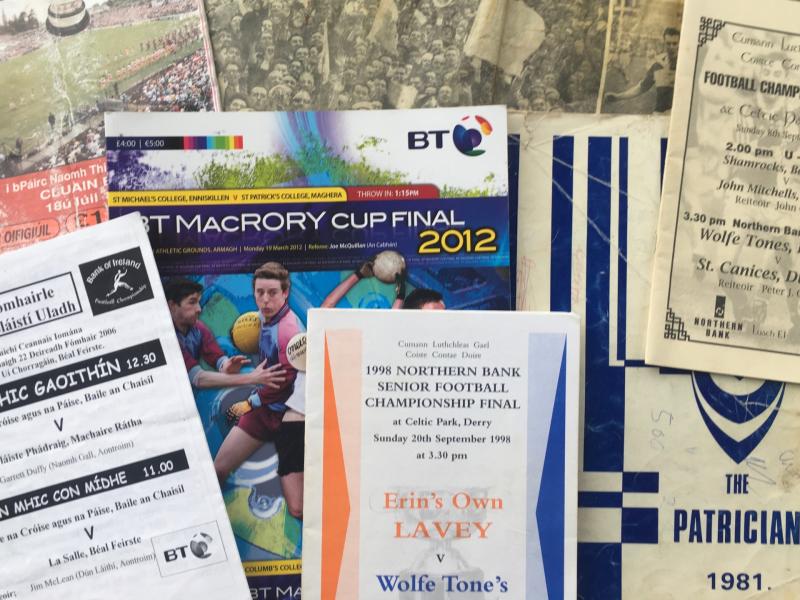 Everybody remembers that cringe-worthy moment when they meet the in-laws for the first time.

It's the time when things start to become very real, yet it's a Hadrian's Wall we all have to get over. The worry about what happens when the small talk runs out, only to be replaced with an uncomfortable silence.

I didn't have that problem. Minutes into my visit, I was on the pig's back. One of the things I remember – apart from the never-ending flow of tea – was Pauline's mother Bridie talking about school days in St Patrick's Maghera, where she worked for 26 years.

The other was her father Patsy having the same fanaticism with talking football as I did. Hours later, a thousand balls were kicked, championships were won and lost, an 11th cup of tea was thrust in my direction before I headed for home.

With the current social distancing, we are now talking in the window (or via zoom/telephone), yet little has changed. Before the more stringent lock-down, you were offered tea as soon as you 'land' on the street with some of the week's essentials and the chat has changed towards sporting nostalgia.

“Mickey might make use of these,” Bridie said to Pauline on a visit, before the the lock-down. Yes that Mickey is me, but that's another story.

It was another stash of Maghera school magazines, The Patrician, going back to the early 80s. And low and behold, as I searched frantically for a photo of Niall Mullan to go with this week's feature on Derry hurling's glory days, there he was in full flow in the 1984 Patrician.

Like every media outlet, producing the County Derry Post's sport section has taken a change of direction. It involves more delving and conjuring. Gone are the reports and round-ups from the club league. The athletics, soccer and rugby seasons are on hold. The local cycling clubs have came to a halt.

Now it is all about nostalgia. In these testing times, it gives our readers a chance to reflect on the past. We are living in unprecedented times. It takes a bit of readjusting, but sports writers are the lucky ones. We have a mountain of material out there – just begging to be sourced. There are stories waiting to be told.

When researching Colum Rocks' impact on Loup's underage success of the early 1990s, his nephew Ronan handed me a bag of scrapbooks. It was simply unbelievable. I am not from Loup, but it was compelling reading. Newspaper cuttings of match reports, previews and pen-pics. There was even a summary of each season and hopes of the next. I was relieved to leave them back. If I had lost them....let's just say, you couldn't replace them.

For the Bellaghy piece a few weeks ago, Joe Cassidy was able to head to his father and mother's house in Ballynease and dig through the memories. If the walls could talk, they would tell the entire Bellaghy story, as well as the Derry pathway of their sons Joe and Damian.

In an interview with teenager Enda Downey, before the postponed MacRory final, he mentioned his Granda and Granny Downey's collection of artefacts, including videos of games and how it gave him a taste of generations past, before he was even born.

“We watched one (game) the other day and it was just catch and kick, it was so different to now,” he said of one of the '100s' of videos, all stored away.

The media industry has moved on. The newer generation is more au fait with online and getting their fix from social media. That's the challenge we face, finding that balance.

But, the last few weeks have reinforced one thing – there is no substitute for the hard copy. YouTube channels come and go, websites can vanish and hard drives can crash. On the other hand, a well archived set of papers, programmes and magazines is simply invaluable.

As the pandemic continues, any glimmer of a date for the resumption of sport is far away over the horizon. When it arrives, we will embrace it like never before.

My first visit to Patsy and Bridie Kennedy taught me well. Get the kettle boiled as soon as you can and lift the lid on all the great moments from the past.

We need conversation, positivity and nostalgia more than ever.