SIDELINE VIEW: Making the best of an impossible task

A Derry team with a difference 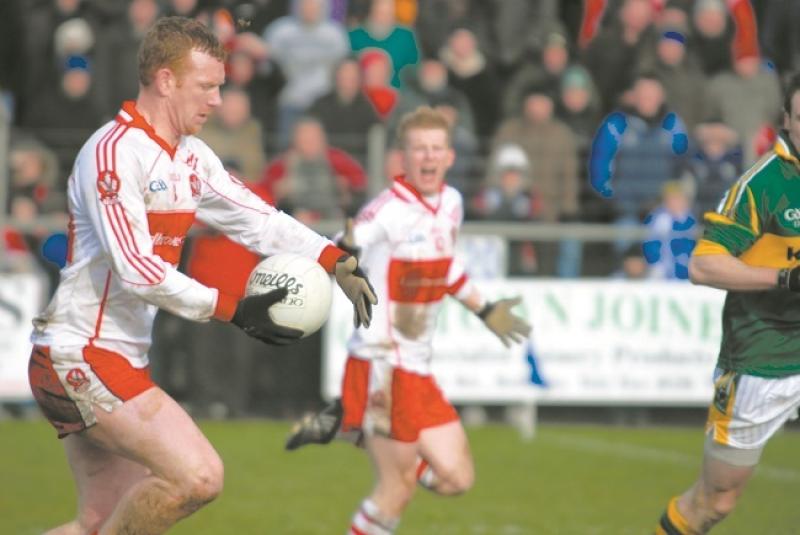 Fergal Doherty in action against Kerry in the league at Bellaghy. (Pic: Mary K Burke)

Days into the sporting lock-down and it was impossible cast your eyes in any particular direction, online, without stumbling across some sort of team selection.

Now that many of us have much more time on our hands, social media tends to pilfer more of our head-space that it really deserves. Staying in touch with the outside world is important and for sport fanatics, we need to keep plugged in.

It is all so different now. If the fixture calendar had stayed as it was, we could've been running pages of coverage of Derry footballers heading back to division two as either league champions or runners-up.

Had Rory Gallagher's side not qualified for the league final, the County Derry Post would've contained a bumper edition of the resumption of the club leagues – one of the most eagerly awaited weekend of the year.

Those of you on Twitter could do worse things than scroll back through Tyrone Tribulations' (@gombeen1) mock updates of the Tyrone championship. It was hilarious and, as someone put it to me during the week, in the current climate, sports reporters are almost doubling up as the positive part of the media partnership.

All sectors of the GAA fraternity were selecting their various teams. Listing a team comprising from players under assorted conditions. For example, Tomás Brady listed the best Ballymaguigan 15 players he had ever played with. There will be no family strife, with brother Sean (of #BradysUpdates fame) was listed at number 12.

Niall Conway selected a team of the best players he had ever managed. Conway steered Ballymaguigan to the 2009 intermediate championship. Of Tomas' selection, Gary Coleman and Andrew McCartney were both on Conway's list.

ONE PLAYER PER CLUB

It was elsewhere that I got sucked into a GAA debate. I found myself tagged in a tweet by Castledawson (and former Claudy) goalkeeper Aidan McLaughlin. During his time with the Derry minors, Aidan was the only one that came to close to selector Noel McFeely, in terms of passion for the Oakleaf jersey. We soon realised on the steps of Casement, when the minor team sat to watch the seniors after our game was over.

Chris McCann named a Derry team from the players he had actually saw playing. The one rule- and it was a savage one – it was one player per club. A ridiculous idea, but Aidan challenged Mickey Wilson, Paul McIntyre, Conan Doherty and myself to our selections.

I immediately checked in. “This will be handy enough,” I thought. I adopted the same strategy as my former wing man from underage coaching days – Gerry 'Jokin' McEldowney.

“We'll fill in the strongest spine, and see from there,” he would say.

Te first Derry man on my list was easy – Anthony Tohill. In my view, he is the most complete player ever to play the game. He won both throw-ins the day Derry demolished Down in the 1993 opener. He could catch with the best, had the scoring prowess other midfielders didn't come close to and had the athleticism to match his skill.

My first problem was, getting Tohill, McGilligan and Fergal Doc into the same team. I took a cop-out by slotting Tohill to wing-forward – where he won a league medal in 1992 – to accommodate the other two.

One of them was McGilligan, who was one of the fastest players on the Derry panel at the time and a man mountain of a man. Jack Sheedy was still nursing some of his war wounds months later.

That brings me to the other. Why have Derry being struggling of late? One main reason has been their inability to final a replacement for 'Doc' and Patsy Bradley.

I remember watching the 2007 All-Ireland Quarter-final when the Dubs beat Derry. Big Fergal was immense. When the final whistle sounded, he collapsed to the ground yards away from seat in the front of the Cusack stand. You often hear managers tell players to run until you can run no more and they'll 'scrape you up and carry you off'. That was one of those days and Fergal Doherty was that man.

The big loser to the one player per club rule was Bellaghy's Damian Cassidy. He was majestic. His performance in the Ulster final in 1993 was always stick out in my memory.

In attack, the first name on the list was Paddy Bradley. He has been Derry's best forward of all-time. He had that swagger that all the top forwards need.

The Glenullin man had a sweet left foot and developed his right to a level that had defenders guessing. But once he turned onto his left, he didn't need to look at the posts, it always sailed over. For me, what set him apart was his first touch. All aspiring players, should take note – the ball always stuck. Defenders didn't get a second sniff. Even last year in a rare appearance against Drumsurn, he still had his touch.

In defence, Tony Scullion was the first man on the team-sheet. Like Bradley, it wasn't because he was the only player from his club in consideration, it was just because he was both brilliant and inspirational.

That block he made in the 1993 Ulster final was just one aspect of it. He played football with a smile on his face. If anyone has a bigger passion for the Derry jersey, I'd love to see it.

There was a video on social media recently from Derry's 'The men who won Maguire' footage. 'Scud' recalls Derry's homecoming and Maghera being 'bleck with people'. His eyes were jumping out of his head as spoke.

My mind raced back to an interview I did with him last year. When recalling how he marked Declan Bonner, Scullion jumped out of his armchair and danced around the living room, with his arms out. It's a moment I will never forget.

The problem with Chris McCann's rule was how limited it was. Henry Downey versus Johnny McGurk. Paul McFlynn and Johnny McBride. Chrissy McKaigue or Patsy Bradley. Who do you pick from McKeever, McGilligan and Geoffrey McGonigle?

There was only one runner for the goalkeeper jersey, so Enda Gormley wasn't going to get a look in either.

That's the beauty of picking teams. “You are all entitled to your opinion, but mine is the only one that matters,” the affable John Rafferty told the Slaughtneil players one night after training.

Paul McIntyre and Conan Doherty have also made their selection. Mickey Wilson is a Down man, so we will let him away with it. As for Aidan McLaughlin, you called us out. It's your turn to nail your colours to the mast.