Slaughtneil remain on course for a fourth successive All-Ireland title

1-5 from Tina Bradley put the Emmet's on their way 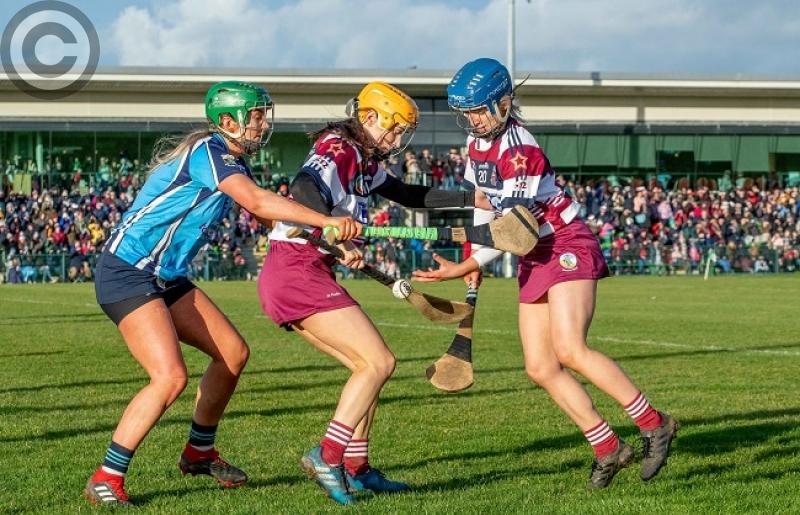 Derry and Ulster champions Slaughtneil remain on target to become only the second club to achieve four-in-a-row honours in the All-Ireland Senior Club Camogie Championship, as a result of their 2-10 to 1-10 defeat of Scarriff/Ogonnelloe at a blustery Donaghmore Ashbourne.

And the Derry champions face familiar opposition in their bid to join Wexford’s Buffer’s Alley in the history books as a result of Sarsfields getting the better of St Vincent’s, 1-13 to 0-8 in MacDonagh Park.

The two teams met in the 2017 and 2018 Finals but the Galway representatives will be hoping for a different result at Croke Park on March 1.

Slaughtneil laid the foundation for their triumph in the first-half, when they had the wind in their favour and defended resolutely after the resumption against an outfit that has made tremendous progress in recent seasons, having lost an All-Ireland Junior Final just four years ago.

Former Offaly star Tina Bradley inflicted much of the damage, hitting 1-4 of her personal tally of 1-5 in that opening period. Bradley’s fortuitous goal after 10 minutes was a key moment as her free flew all the way to the net at a juncture when Scariff/Ogonnelloe were trailing by just a point.

Bradley (twice), Louise Dougan and Shannon Graham had all given Slaughtneil the lead but Marion Rodgers, Mairéad Scanlan on the double had kept their Clare opponents very much in touch.

Therese Mallon rattled in a second goal just five minutes after Bradley’s strike, after receiving an excellent pass from Josie McMullan, and at the other end, Jolene Bradley saved splendidly from Rodgers, contributing to a 2-8 to 0-6 advantage at the break.

That enabled Slaughtneil to dig in though Scariff/Ogonnelloe threw everything at them after the resumption and kept the Ulster side to two points, from Graham and Tina Bradley.

Rodgers (two), Lynda Daly and Scanlan raised white flags but they needed a goal and though the excellent Rodgers did strike, it was almost the last act of the game and too late to deny Slaughtneil.

Contrary to Slaughtneil, Sarsfields did the damage in the second half, leading by just a point at the interval, 0-6 to 0-5.

The youngest of four McGrath sisters on the team finished as top scorer with 10 points, two of those from play, but it was the second half goal of Rachel Murray six minutes into the second half that really turned the tide, as she deflected the sliotar to the net following Niamh McGrath’s long free.

The Dublin team did have opportunities but the absence of injured former All-Star Aisling Maher was keenly felt. Sarsfields’ dominance was undoubted however, and Siobhán McGrath was able to enjoy the luxury of opting to take points from two penalties, while siblings Niamh and Orlaith also got on the scoresheet for what was ultimately a comfortable victory.