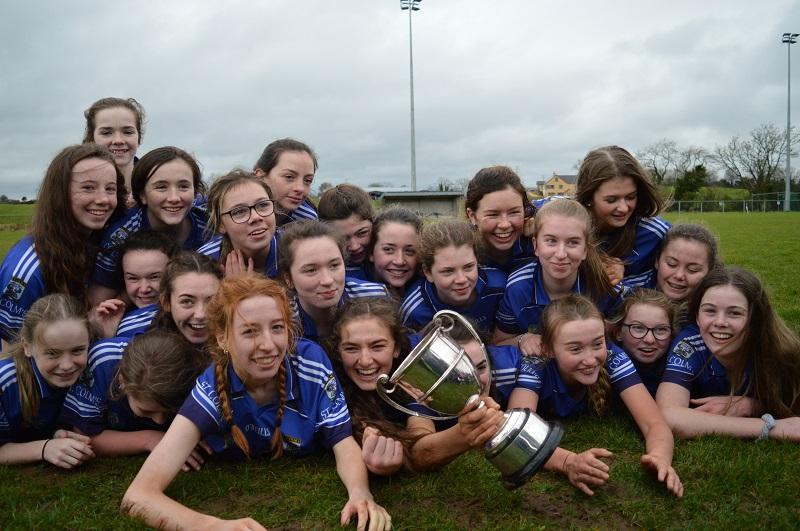 Last season, St Colm's landed the Ulster 'C' title but after moving up a grade, they once again stand as Ulster champions.

Last week, with victory over St Killian's Garron Tower, they annexed the Liatroim Fontenoys Cup for the first-time in the school's history.

St Colm's lost to four time winners St Pius Magherafelt in the 2011 final but this time, they went one better. Despite inclement weather at Bellaghy's Drumanee training complex, St Colm's dug deep to see off a fancied St Killian's side in the closing stages.

Just two points separated them at the break and the teams were level as the clock ticked towards full-time but late points from Sinéad McGuigan and Aoife Doyle edged St Colm's over the line.

It was a victory built on a solid defensive footing. St Killian's bagged four first-half goals in their semi-final replay win over Loreto but Clodagh McPeake and Niamh Graham (who scored five goals between them against St Killian's) were kept under wraps.

St Colm's had a five week lay-off since their last competitive game, due to 11 of coach Fiona Devlin's squad being involved in the school's musical production of Oliver.

“The girls remained focused but could have been frustrated but I didn't allow this mentality to set in as  we knew the final was in the very near future. It was a matter of keeping the head down and  working hard on the training field,” Devlin outlined.

“With the assistance of Ballinascreen club, we played a mix of St Colm's seniors and other  girls from the club of a similar age the Sunday before the final.

“This collective meeting was absolutely essential, from a mental perspective, to get the team focused and be ready for the match situation.”

In the end, their battling qualities came to the fore to force them over the finish line with captain Aoife Doyle thwarting McPeake in the closing stages when a St Killian's goal would have turned the tables.

In the final analysis Doyle proved the difference and St Colm's move forward into the All-Ireland series in the new year, armed with the experiences gained from last season's run.

Doyle, was marshalled well by Orla Donnelly when she began the game at full-forward, before a reshuffle changed the shape of the St Colm's team.

Ciara Scullion, with illness, was a doubt going into the game and only lasted to half-time. Doyle went to midfield, and with Erin Kelly putting a tremendous shift on Scullion's opponent, it left Doyle free to impose herself on St Killian's.

Conditions were difficult and heavy underfoot following some heavy showers just before throw-in, but both teams worked hard from start to finish and most of the scores at both ends came from placed balls.

Draperstown got off to a quick start with three Sinéad McGuigan frees within the opening six minutes and with St Killian's getting four first-half goals in their semi-final replay, this was a positive start from St Colm's.

Niamh Graham, who bagged 2-4 in their win over Loreto, pointed three frees to level the game after 20 minutes.

St Killian's then hit Draperstown for a goal. A long ball into the danger area wasn't cleared and Clodagh McPeake finished to the net.

St Colm's reply was instant and almost a carbon copy. An Aoife Doyle free caused panic in the St Killian's defence and Mary Jo McEldowney was on hand to nab a goal and level the game once again.

'The Tower' controlled much of the half and will rue not being further in the lead, despite Graham and Sine Woodhouse giving them a slender lead.

“So  essentially we were going into the second-half believing that this final was in our grasp, one score would make the difference and with  dogged determination those girls delivered inside three minutes of the second-half with a magnificent goal.”

A free from Doyle was finished to the net by Grace Kelly and St Colm's were back in front. Seconds later, St Killian's had a chance to regain their lead but Niamh Graham saw her penalty saved by Rhiannah O’Neill.

For the rest of the game, as the weather and conditions worsened, the game transformed into a battle and both teams were well matched.

With eight minutes remaining, Niamh Graham brought the sides level (1-7 to 2-4) and a draw wasn't out of the question but Aoife Doyle had other ideas. She gathered a loose sliotar before slotting over St Colm's first and only point from play, putting them back in front.

She then won a free, allowing Sinéad McGuigan to pop over the insurance point but St Killian's weren't finished yet. They mounted one last attack but when Clodagh McPeake attempted to conjure a winning goal it was Doyle who tracked back to cut out the danger. It ended St Killian's comeback hopes and ensured another piece of silverware was on its way back to St Colm's.

Fiona Devlin hailed the work-rate and the intensity her side operated at, evening in those crucial closing stages. It epitomised their spirit.

“When St Killian's went on that final attack in injury time, the girls were exhausted with the heavy under foot conditions but they dug deep and you could see leaders all over the pitch taking responsibility, to ensure no goal was conceded,” she explains.

“Aoife Doyle was back helping out her defence in true style at the finish. The heroic save young Rhiannah O'Neill made, in nets, followed by her full-back line putting their bodies on the line and got ball the out to Aoife - epitomised the determination and resolve of all the girls.”

The win puts them on the All-Ireland trail in February, something Devlin feels is 'bonus territory' for her side. However, it is something they will relish and the experience 'quite a number' of the squad have from last year will be an advantage.

“Moving up a grade this year never phased them, they looked forward to each game and as the competition progressed they believed they were in with a chance of lifting the Liatroim Fontenoys Cup for the first time in the school's history,” Devlin stressed.

“Even though this journey so far has been remarkable for these girls  at St Colm's High school, it must be remembered they  all hail from the Ballinascreen camogie club and together with their  families,   and the wider community - they have all  played a massive part in achieving this Ulster title.”

PLAYER OF THE MATCH

Aoife Doyle - There were outstanding performances from Shannon Scullion, Cliodhna Hickson, Erin Kelly and Sinéad McGuigan. However, Aoife Doyle was the stand out player. She won frees inside in the early stages which were crucial. Her second-half performance was immense. From setting Grace Kelly up for the goal to finding the legs to retreat and help her defence, especially in injury time.

Second-half start – St Colm's trailed by two at the break and need a hell of a start to the second-half. Grace Kelly's goal was vital, in that it lifted St Colm's but when St Killian's were awarded a penalty in the next attack, they needed a vital save on the line from Rhiannah O’Neill, before Cliodhna Hickson's clearance. A massive moment.

SCORE OF THE GAME

Kelly goal – Three minutes into the second-half, Aoife Doyle was fouled at midfield but she didn't stand on ceremony. Instinctively, she delivered a perfect ball to Grace who caught it, turned and she had only one thing on her mind – goal. It was an almighty score from such a young player.