The 24-year-old is carrying on where a previous butcher on the street left off. 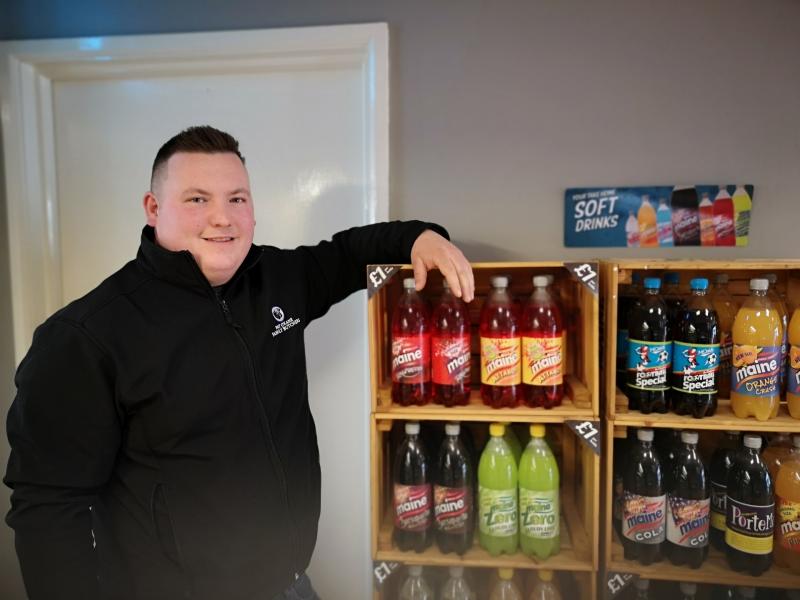 A County Derry butcher who launched his own store at just 23 years of age has said local butchers are thriving on the back of the Covid-19 pandemic.

The street was previously home to Cunning's Butchers, and in opening up, O'Kane's is carrying on the area's tradition of local butchery.

Now 24, Patrick is preparing for his first Christmas in business. The venture is his latest leap of faith, having shown plenty of initiative so far in his career.

“I'm the first butcher, but there are a lot of self-starters in our family,” he told the County Derry Post.

“I started working in 2013 when I left school; starting at the bottom with a Saturday job brushing floors and washing the dishes.

“I'd saved up a wee bit of money when I was 18,19, and I bought most of the equipment needed to start up my own shop, but I needed the right premises and location.

“This space came up, with great access to the car park behind us, so the facilities were great. It came up at the right time.

“I'd actually sold all the equipment I'd previously bought and had to start to buy it all again.”

The investment of so much money and time during a period of Covid-driven economic instability was daunting.

“Our first week was scary, I'm not going to lie. We had so much money put into the place and we didn't know what to expect,” said Patrick.

“On our first Saturday though, we were queued out the door. We supply six shops around the area with the pre-packed meals as well. It helps customers from those areas who want to buy our produce.

“We've had great support from the local community and we're trying to offer something for everybody. It's been paying off and we're pushing hard.”

Having built up experience from working six days a week as a teenager, Patrick's entrepreneurial streak was given a nudge from a health predicament.

A desire to be available to care for his fiancée led to a decision to open the premises in Coleraine.

“I'd met Emma, who's a Coleraine lady, and we're together now almost six years. She is a Type 1 diabetic,” he said.

“Anywhere I worked, there was always a problem with sick days and that, and someone said to me I'd be better staying at home as a full-time carer. 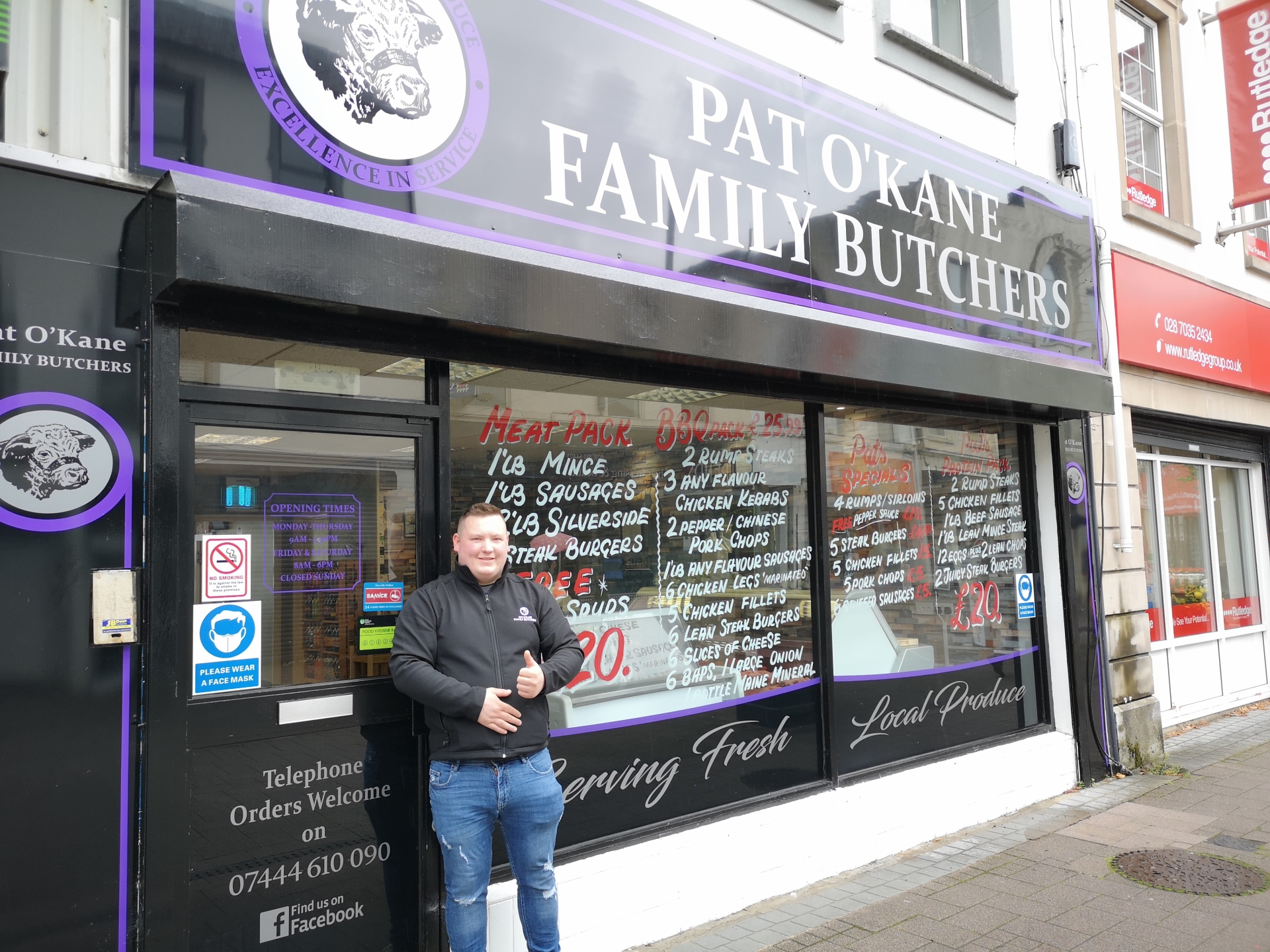 Patrick outside the shop in Coleraine.

“That gave me the kick up the arse I needed to get out on my own. I've people I can trust in the shop, and I can take Emma to appointments without having to answer to anyone.

“She's had issues with her sight, so she attends regular appointments up at the Royal as well, and it helps a lot knowing you have that security.”

Patrick, a native of Rasharkin in County Antrim, enlisted the help of Roe Valley Enterprises, who helped him draw up a business plan and assisted with his sales projections and targets.

It was a natural progression in a career that had, for him, become more than just a job.

“There are big overheads with a butchers and a lot of costs involved, but it's not all about the money for us.

“I'd been put out in the factory, where you had no people to serve, you were packing trays and putting labels on, and it wasn't for me.

“I was working Monday to Friday in the factory and then a Saturday job came up. It didn't teach me everything I know, but they taught me how to treat a customer properly.”

Patrick is excited by the prospect of the new North West Regional College (NWRC) Butchery course, spearheaded by his former employers, McAtamney's. 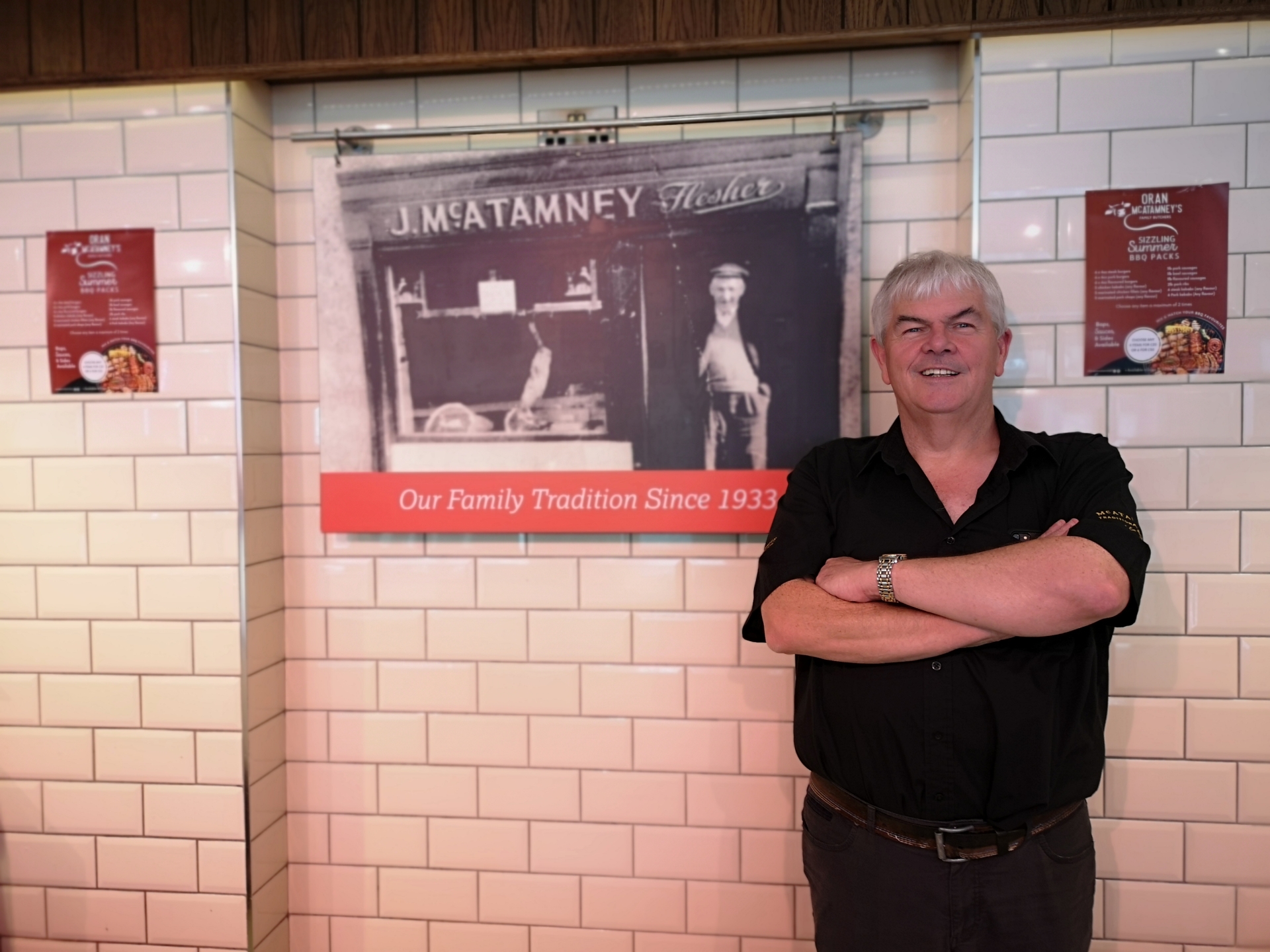 Former boss Oran McAtamney is a lecturer on the course, and Patrick says he has been an inspiration to his own career.

“Oran is one of the best bosses I had. He's right up there, a great fella. Working for Oran was where I got my passion, and it's good to see him back in full swing,” he said.

“It would be nice to see a lot of new butchers coming up through. It's something you can't be forced into, you have to have a real passion for food.

“It's not like how it used to be with the sawdust on the floors. People haven't as much time to cook home meals, with such a busy schedule.”

One advantage of opening during the pandemic is that O'Kane's have been able to tap into a growing trend of customers returning to their local butcher.

The local nature of the business is also helping to mitigate the effect the UK's exit from the EU has had on many businesses.

“Too many of the bigger supermarkets are trying to do everything under one roof,” said Patrick.

“I was working Mountsandel at the time Covid started and we noticed people were even buying freezers just so they could fill them up.

“We've fresh stock coming in every day, and because it's local, we don't have to worry about Brexit or anything like that.

“It's nice to see people using their local butcher again. A lot of people said we were mad opening up; there were still a lot of restrictions.

“We've had great support from the local community and we're trying to offer something for everybody.”

Amid the whirlwind of starting a new business and steering it through the minefield created by Covid and Brexit, one thing stays constant for Patrick.

“When it comes down to it, I always want to make my family and my wife proud,” he added.

County Derry butchers to pass on skills to the next generation

A new course has been launched to plug a skills gap in the butchering industry.

The defendant is accused of robbing a Spar shop in Limavady at the weekend.