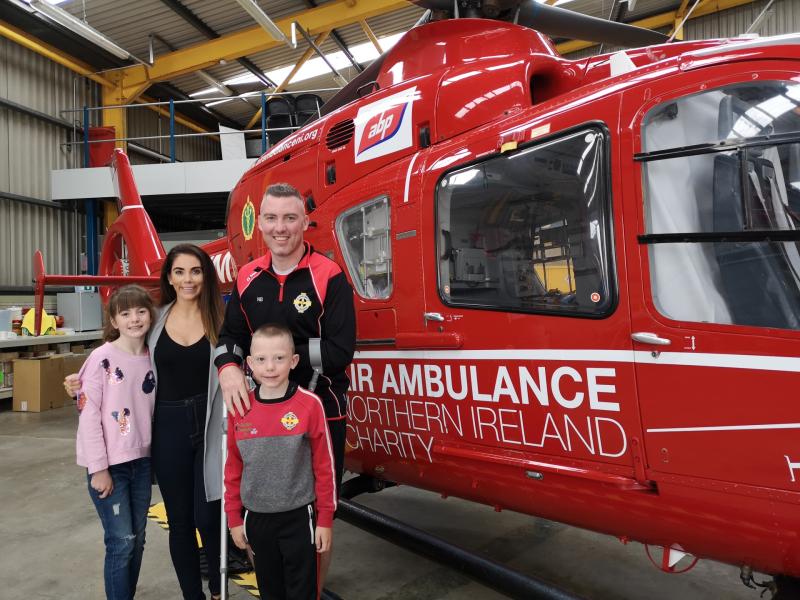 A County Derry GAA club have raised thousands of pounds for Air Ambulance NI after they came to the aid of midfielder Niall Bradley following his recent horror injury. Liam Tunney caught up with the Greenlough man to hear about the incident and how he is recovering.

Just a few minutes into the opening game of the Derry football league, Greenlough midfielder Niall Bradley lined up to face his own kick out.

As he leapt to pluck the ball from the air, he couldn't have realised it would be the last time he ever performed the action.

By the time he returned to solid ground, his football career was over, but, by his own admission, things could have been a lot worse.

“I heard the sound first, the crack and pop,” the 34-year-old told the County Derry Post.

“We were playing Kilrea in the first league game of the season. It was the start of the game, about a minute in, and we had a kick out.

“It came out to us in the middle of the field – I caught it by the way – but I went down awkwardly, there was no one near me. It was a freak accident and I ended up dislocating my knee.

“When I went down, I tried to put my leg out straight again and then the initial pain came in.

“The pain was unreal, it's hard to explain. It's the one thing I remember most out of the whole scenario from then after.” 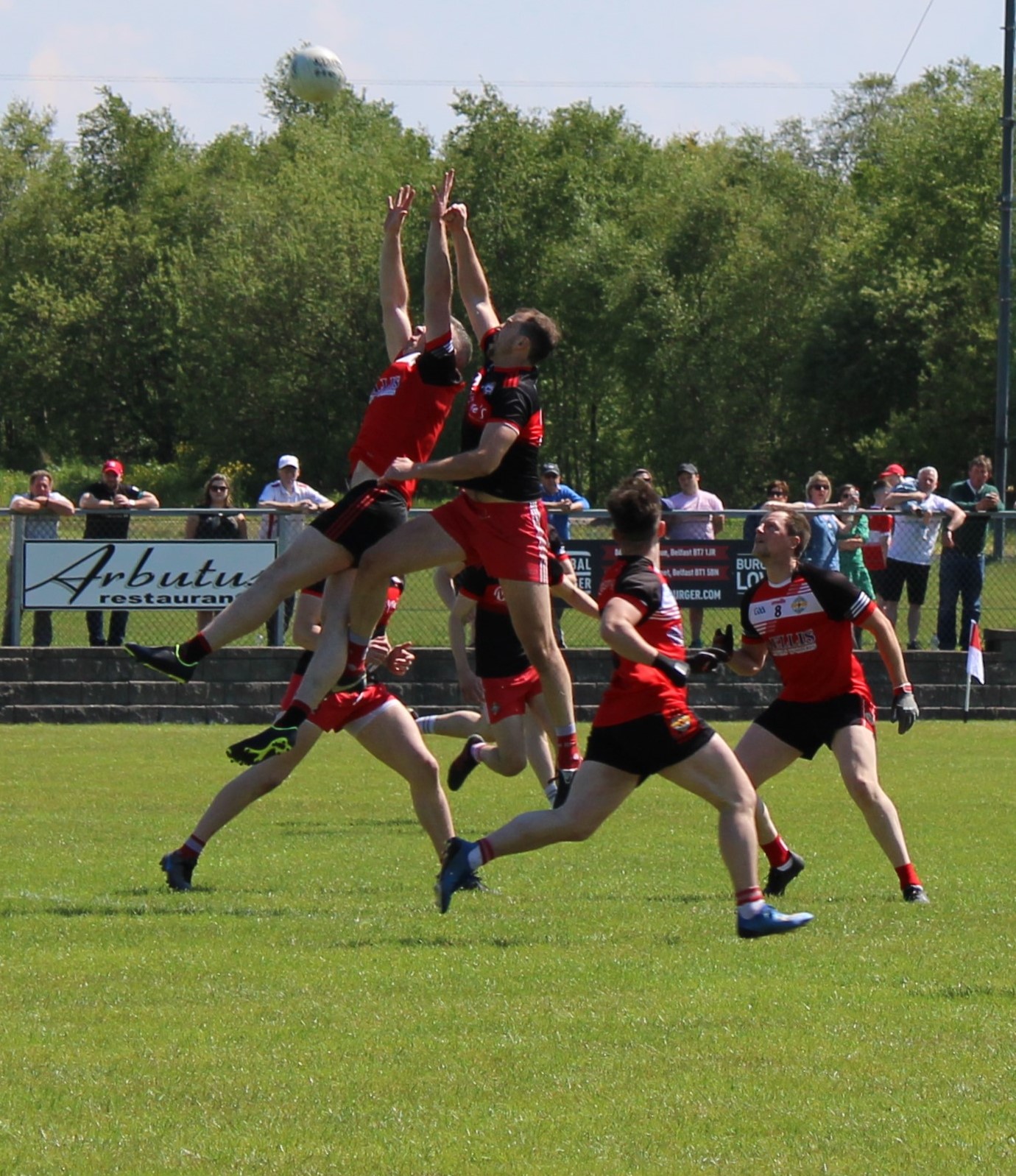 The final leap: Niall's wife Kerri was on hand to capture what would be the final catch of his football career. Pic: Kerri Bradley

The rumble of concern from around Pearse Park, Kilrea, grew muted as the gravity of the incident became clear to those watching on.

A huddle of players had gathered around Niall in the middle of the field, with some staying a bit longer than others.

“I remember there were a few came up for a nosy, just to see it, but then maybe didn't like what they saw and went back again,” laughed Niall.

“Charlie Kielt was my opposite number and he stayed with me the whole time, Brian McCallion, my team mate, was actually holding my knee in position.

“Every time I moved, he was getting more of a scowling but he stayed there and was a big help on the day as well.”

The extent of Niall's injury was clear, and Kilrea summoned former player and doctor, Brian Óg McAlary to come and assess the situation.

McAlary had been at a First Communion ceremony, and told Niall he was surprised to be getting a call during the match.

“Someone from Kilrea had rung a former underage teammate who's now a doctor – Brian Óg McAlary – and he landed down,” he said.

“He's sort of finished playing now and when he got the call he was thinking 'this isn't a good start for Kilrea if they're looking numbers already' but when he heard it was an injury he came down.” 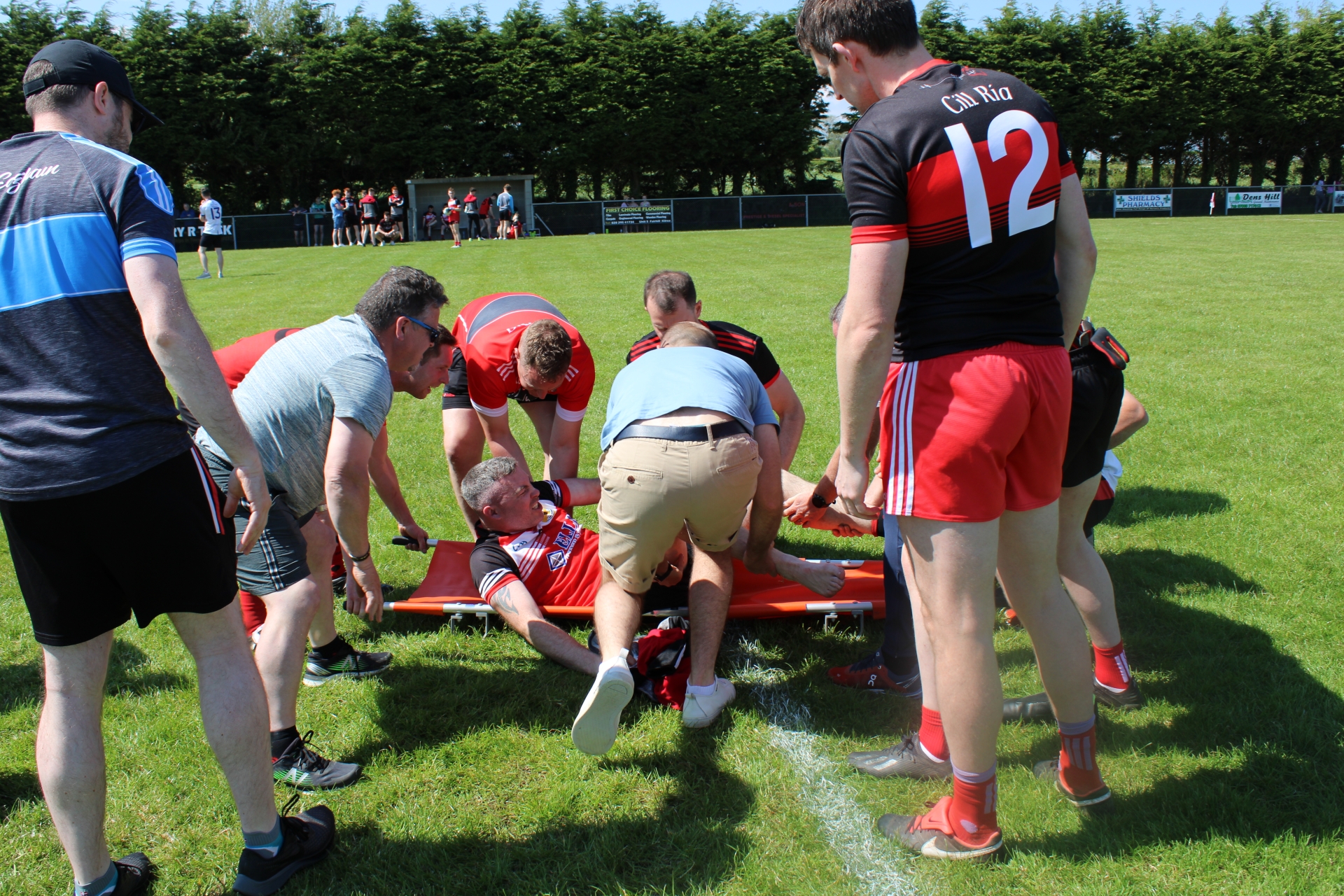 Players and club members tending to Niall as he is loaded onto a stretcher at Pearse Park. Pic: Kerri Bradley

Despite maintaining his composure throughout, Brian Óg was concerned. He couldn't find a pulse in Niall's foot. The dislocation of his knee was restricting the blood flow.

It needed rectified immediately, or Niall's leg was at risk of amputation. Brian Óg called for the Air Ambulance.

“Worst case scenario, if the Air Ambulance hadn't come, my leg could have had to be amputated; it was that severe of an injury,” said Niall.

“There would have been nerve damage so I could have had no movement in the bottom of my foot. Although I have a big recovery ahead of me, it's good I can have as much as 80% mobility in my knee.” 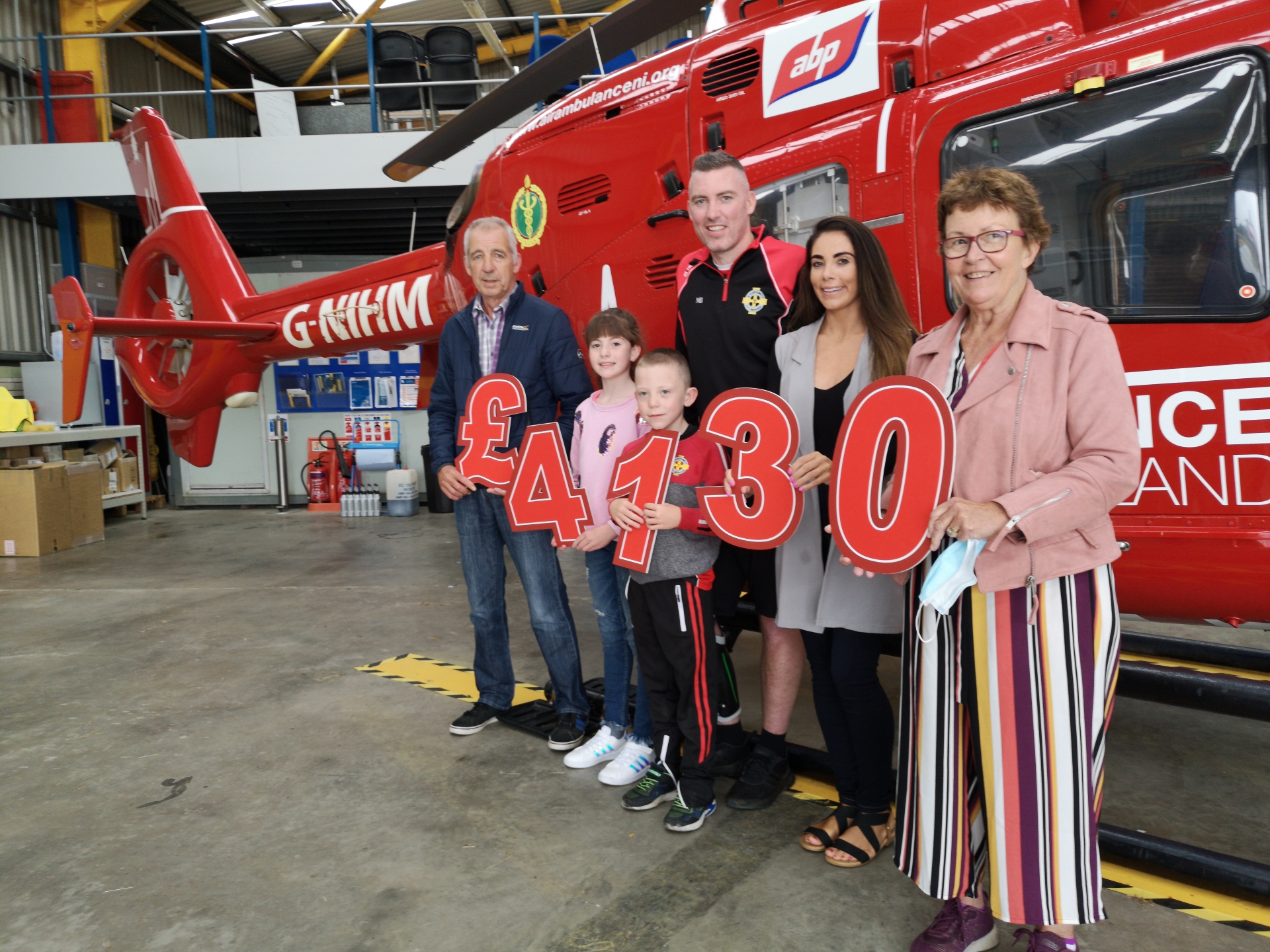 Niall Bradley along with wife Kerri, children Tieghan and Céarnach, and parents Paul and Pat Bradley.

After the initial adrenaline and the relief that he was okay, the sobering reality of the injury's implications began to dawn on Niall and his family.

Apart from the disappointment of having to end his football career, the two-year rehabilitation process would be gruelling.

Niall is also facing six to eight months off work as a result of the injury, with a pause in the GAA's loss of earnings scheme meaning he will be left out of pocket.

He says the support of his employer, as well as his own club and others in the county, has been heartening.

“The GAA family is brilliant. There are ones I've played with over the years, even enemies on the pitch that have messaged wishing me well,” he said.

“That's why we love it, that's why we play. It's been really good everyone reaching out and being so supportive.” 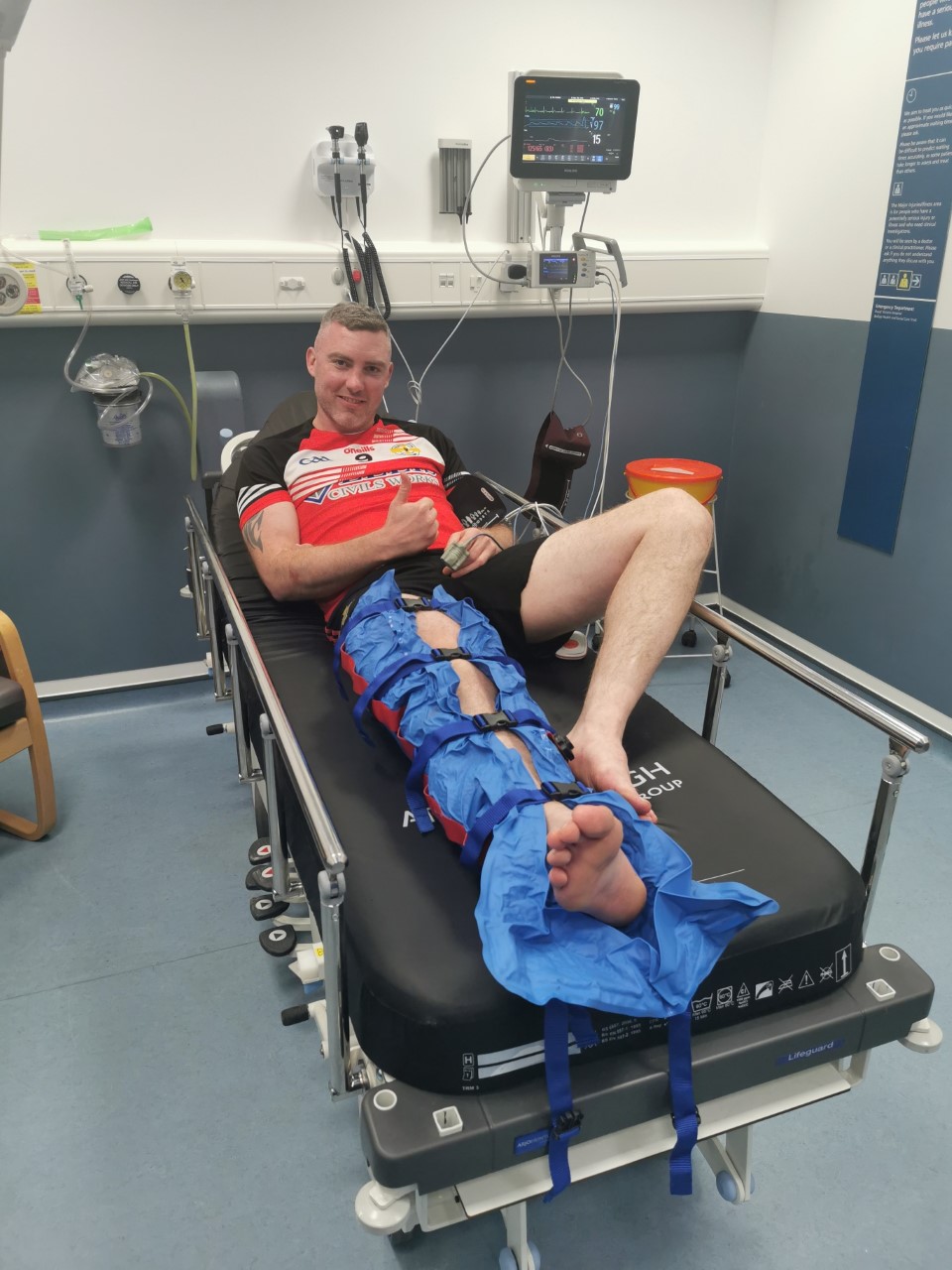 Niall's club, St Oliver Plunkett's Greenlough, organised a fundraising evening for the Air Ambulance after seeing first hand how crucial the service is.

Over £4,000 was raised on the evening, and Niall was able to present the cheque to the Air Ambulance last week.

Camogie Chairperson, Charlene Downey, thanked all those who took part in the event.

“On behalf of St Oliver Plunkett's GAC I would like to take this opportunity to thank everyone that attended the BBQ fundraiser,” she said.

“Thanks to all the football and camogie teams that graced the pitches for some excellent games and skills and especially to everyone that donated.

“£4,130 was more than we ever expected to collect. To all the volunteers on the day, without you we would never be able to run events like these.” 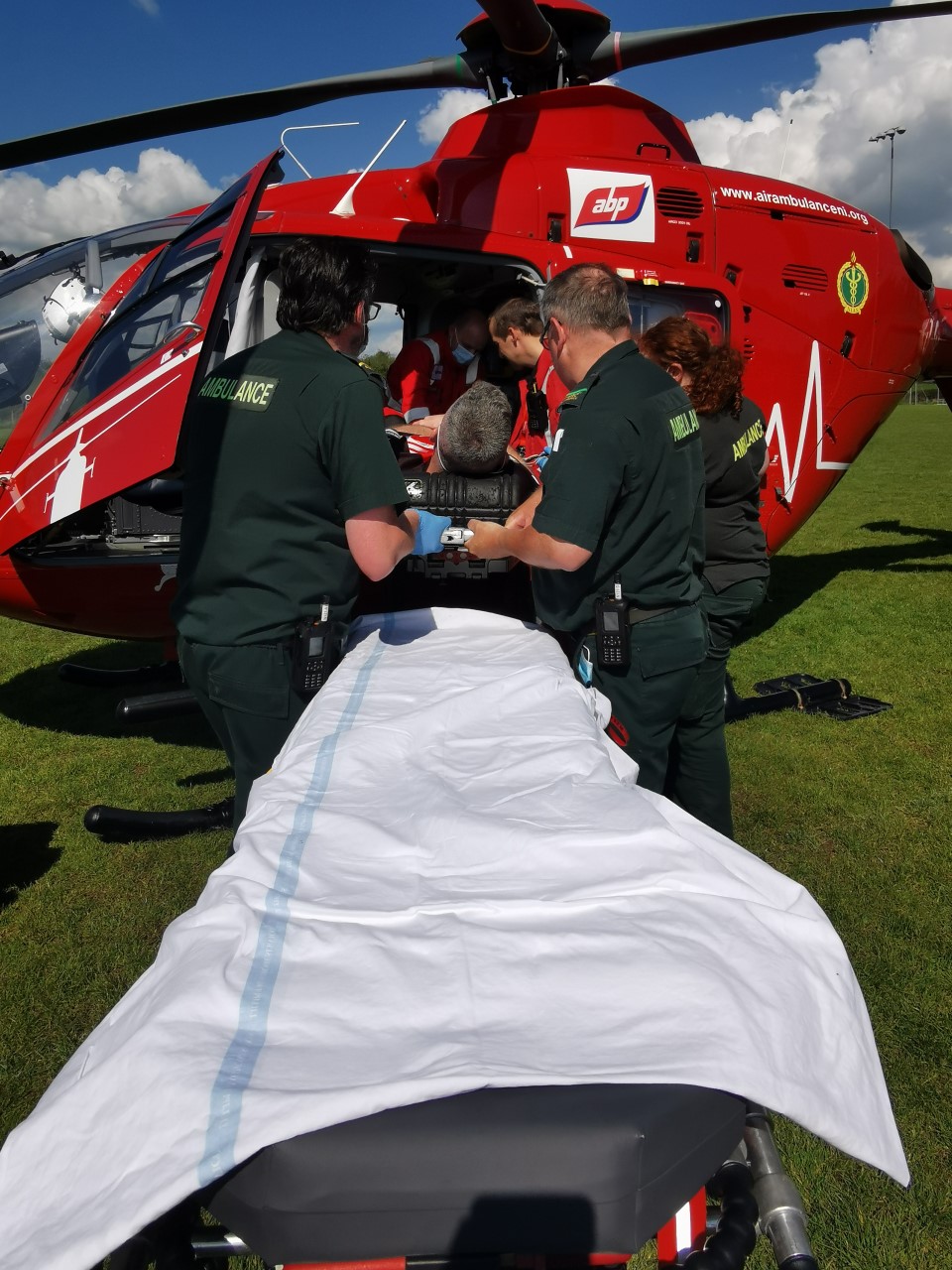 The Air Ambulance administering treatment to Niall in Kilrea.

Breige Mulholland, from Air Ambulance NI, said it was a pleasure to meet Niall and hear about his story.

“It is always a pleasure to meet HEMS patients and their families. Niall is making remarkable progress and we wish him a continued speedy recovery,” she said.

“The support from St Oliver Plunkett’s GAC through their football & camogie blitz and BBQ is very much appreciated and we thank all who contributed to the total of £4,130 raised.

“These funds will make a massive contribution in helping future patients and the medical team are called upon on average twice per day.”

Requiring £2 million annually to maintain the service, the Air Ambulance relies on public donations to continue to save lives, with fundraising severely impacted by the Covid-19 pandemic.

Niall says the fact the service is a charity means raising the funds and awareness needed is even more crucial.

“We didn't realise it was a charitable thing until I had any dealings with it,” he said.

“It's amazing what they do; they need to raise a colossal amount of money every year to run these facilities.” 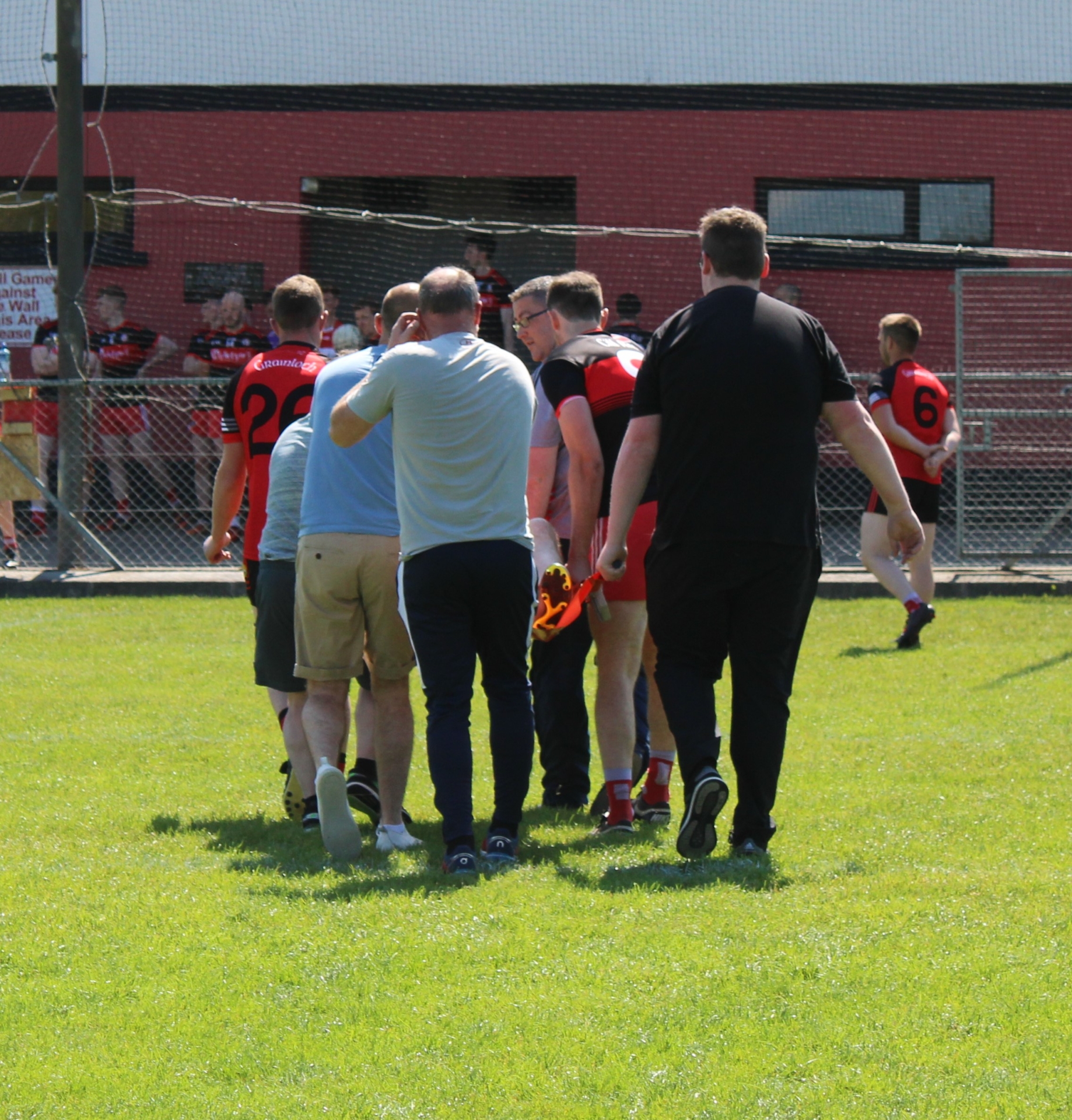 Niall is stretchered off at Pearse Park.

As for his retirement from plucking balls out of the sky in the Greenlough midfield, Niall is staying positive.

“I suppose I could have been retired a few years ago, but you keep going for the love of it,” he said.

“It's not nice being forced to retire, but at the same time, when would I ever have retired? I'm at one with it now.

“Things could have been a lot worse for me today if it wasn't for the Air Ambulance.”

If you would like to support the Air Ambulance, there are a number of exciting upcoming events you can participate in or you could organise your own event with the charity’s support.

A round of county league games were played while the GAA’s loss of earnings cover was ‘paused’.