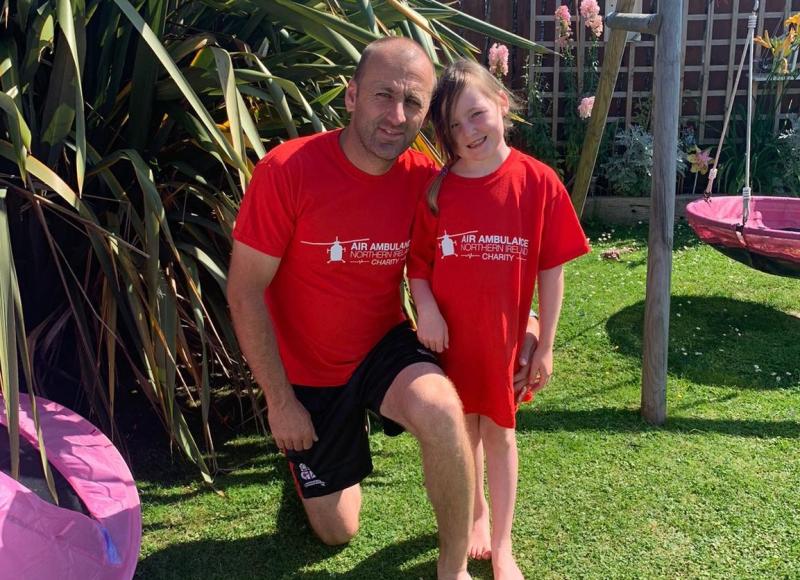 A County Derry man is taking on a tough challenge to raise money for a charity which help saved his father-in-law's life.

Ian Crockett from Limavady has set himself the challenge of running 26 miles to raise vital funds for Air Ambulance Northern Ireland.

Ian will complete his marathon challenge, running between Desertmartin and Limavady on the August 8.

He was inspired to fundraise for the charity after Air Ambulance NI was tasked to his father-in-law following a severe farming incident.

One in ten of those taskings were to workplace incidents including those on farms.

Ian praised the work of the vital service.

“The Air Ambulance was tasked to my father-in-law after a bad farm accident,” he said.

“The crew treated him at the scene and he was looked after with great care.

“Thanks to their quick actions that day, he is now at home and recovering well. I want to do what I can to support this invaluable service that saves lives, brains and limbs.

“I want thank the team for the exceptional care they provided to my father-in-law that day and thank everyone who has supported by challenge so far through my Just Giving Page: www.justgiving.com/fundraising/Jimmy-Crockett ”.

“Running a marathon distance is no easy task for anyone and it will be a real test of Ian’s fitness and endurance.

“We are humbled and grateful that Ian wants to do this in support of Air Ambulance NI.

“As a service we rely heavily on charitable donations to keep the medical team in the air, delivering critical care to patients who find themselves in life or limb threatening situations.

“It costs £5,500 each day to sustain the service so without this type of support from the local community, the team simply couldn’t fly.

“We’re delighted to hear that Ian’s father-in-law is recovering well and we want to say a huge thank you to Ian and every-one who is supporting his challenge, it’s not only the medical crew who save lives but also the people who support our service.”

The HEMS team attend patients who are seriously ill or injured, bringing emergency pre-hospital care direct to the casualty with the aim of saving lives, brains and limbs.

Air Ambulance NI needs to raise £2million each year to maintain this service but fundraising has been severely impacted by Covid19 so fundraisers such as this one are crucial.