Local playwright looks back on a happy childhood 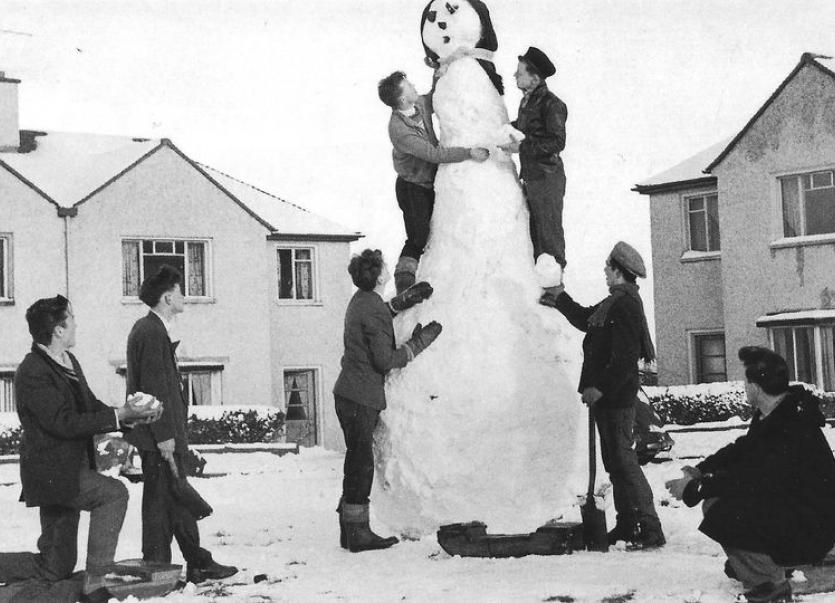 A Creggan snowman from the 1960s, dubbed the 'King of Broadway.'

Brian Foster is one of Derry's most prolific playwrights, with 'Maire a Woman of Derry' his best known and most successful play. Here, in the first of a series of articles published in the Derry News, the 69-year-old looks back  on being brought up in 'wonderful' Creggan, going for walks for which today's young people would order a taxi and attending his first ever Christmas Eve Midnight Mass.

I was born in 1952 in a crowded tenement house in Bridge Street, with six families having to share the same outside toilet in the backyard.

My family moved to 96 Creggan Heights in 1953 when I was a year old. My mother Susie (nee Ryan) and my father Richard (Dickie) worked their socks off to make ends meet, to bring us up the very best they could. Great people both of them, and I miss them big time now they’re gone.

I have three siblings. My older brother Kevin, my older sister Joan, and my younger sister Sylvia, who was the only one of us born in Creggan. I also had another sister, Irene, who sadly died in infancy.

Creggan was a wonderful place in which to grow up. I have nothing but good memories of it and the great neighbours who lived in our street.

No one had much so everyone was equal. What you didn’t have you didn’t miss.

Doors were left unlocked. Neighbour looked after neighbour. Streets were communities, not just rows of houses.

A trip on the Swilly bus to Buncrana was an adventure. Every mystery tour that left Derry ended up in the Downings.

We had heavier falls of snow than today. Half the gardens in Creggan had a snowman. We had slides down Fanad Drive and Bligh’s Lane that wouldn’t have been out of place in the Winter Olympics.

On summer Sundays we would set off on foot from Creggan Heights to Grianan Fort and back. A distance of 14 miles. Wains today would be ordering a taxi.

We walked to the Black Hut to buy boiled sweets and ice-cream. We explored The Quarry and The Doctor’s Dam. We discovered birds nests but never hurt the wee scaldies or lifted out the eggs.

We learnt the skills of making batons and St. Brigid’s crosses out of bulrushes.

We made slingshots out of bedsprings. We made go-kart-trolleys out of old pram wheels.

Girls of five clattered round the street in their ma’s high-heels pushing a wee pram with their dolly in it. Boys of five wore cowboy suits and a belt with a silver cap-gun.

We had pea-shooters and spud-guns. We had The Beano and The Dandy. We had great music. Great fashion. Great energy. We had a great love of life.

Procul Harum sang ‘A Whiter Shade of Pale.’ Manfred Mann sang ‘Do Wah Diddy Diddy.' The Beatles sang 'She Loves You'. We knew the words of every song. Still do.

A new pair of shoes was a big event. A new suit, or new dress, an even bigger event. Teenagers and older had the showbands. Brendan and The Royal ... The Hucklebuck. Joe Dolan... The Answer to Everything. Dickie Rock and The Miami – ‘spit on me Dickie!'”

We respected our parents. Respected all adults. Our Christmas presents were a wee toy and a selection box. Which we looked forward to for months. Christmas was always such a very special time for all of us

One particular Christmas event stands out.

As always, the anticipation of the arrival of Christmas was huge. And here, on the last night before the big day, in our wee house in Creggan Heights, the Christmas presents were all laid out under the real Christmas tree, the coal fire was blazing bright in the hearth, and my mother had a big pot of home-made chicken soup bubbling away on the gas cooker in our kitchen.

I had been given permission to attend my first ever Christmas Eve Midnight Mass in St. Mary’s Church with a few of my mates.

Throughout the week, the radio weather forecasts had been assuring us that a heavy fall of snow was imminent. But, to our increasing dismay, it had yet to arrive.

Hourly. me and my mates would stand scanning the cloudless sky above Creggan, assuring one another that the forecast snow would definitely come bucketing down any minute. But, as those minutes had turned to hours, those hours to days, there was still not the fall of a single snowflake.

With just an hour to go until a new Christmas Day came upon us, the streets of Creggan were bone dry and the black velvet sky overhead was pierced through by a billion twinkling stars. But with still no sign of the forecast snow, we were beginning to accept the inevitable, that we would not see that most magical of events … a white Christmas.

Around a quarter- to-midnight four or five of us set off on foot for St. Mary’s. As did all Midnight Mass goers back in those days, we were proudly wearing our best new Christmas clothes.

And as we walked down the narrow lane connecting Creggan Heights to the shops, from seemingly every house in Rinmore Drive, the bungalows and Central Drive, people emerged to head in the same direction as us.

Even without the snow I felt a special excitement walking down to mass in the quiet darkness of late night. It seemed surreal. Almost a rebellious thing to do.

When at last we reached St. Mary’s, the chapel looked suitably Christmassy, decked out with winter flowers and a Bethlehem crib by the altar containing life-size statues. And best of all, in the background, came the sound of St. Mary’s choir singing the most beautiful Christmas hymns.

Everything looked lovely and wholesome and good. This was an experience, an occasion not to be missed.

Then the Mass began, bringing with it the arrival of another Christmas Day. And on it went, until, with barely ten minutes to go till it was ended, news began filtering along the packed pews - whispers that those standing at the back of the crowded chapel were reporting snow had begun falling outside.

An instant buzz of excitement arose! No one could wait for the Mass to end, as fresh reports from the back of the chapel brigade informed us that it wasn’t just snowing outside, it was' pelting down.'

And when Father Rooney finally told us ‘the Mass is over,  go home in peace’, and the choir launched into a haunting Silent Night, an almighty stampede ensued to get out into the snow as quickly as our feet would carry us.

When we did finally make it outside, the sight that met us was something wondrous to behold. With not a whisper of breeze in the air, with everything perfectly peaceful and still and holy, from the heavens above there came a cascade of the biggest snowflakes I had ever seen.

Already snowball fights were breaking out. So we joined in, there being no hurry to get home. And I recall standing there on the steps of St. Mary’s that night and peering out over the landscape of Derry, all the way across to the Waterside and Altnagelvin Hospital, knowing that that winter wonderland sight was something precious to lock into my memory for revisiting in years to come.

And, as I gazed out across the city, taking in the awesome wonder of nature, giant snowflake after giant snowflake settled gently on my warm brow and cheeks ... until it felt like I was being caressed by the delicate fingers of angels.

Today, as we see a possible end in sight to this awful virus, memories of that special night become ever more precious
because, for each of us, our memories are our stepping stones through the life we’ve led.

Memories of loved ones no longer with us. Memories of events, good, bad and ugly that befell us. Memories of a distant youth when a simple fall of white snow made such a lasting impact that it would remain vivid sixty years later.

That night, as we small group of Creggan lads trudged homewards through the now deep snow, making our gallant way back up past the shops to Creggan Heights, it seemed as if the whole estate had come out onto the streets to enjoy the sheer exhilaration a heavy fall of the white stuff brings.

And still the snow came pelting down, crunching loudly beneath our feet, turning me and my mates into little walking snowmen with blushing red faces and cherry noses.

Upon reaching our house, I shook the thick layer of snow from my coat, kicked my snow covered shoes against the steps outside our front door, and went in to enjoy a bowl of my mother’s steaming hot chicken soup next to the blazing fire.

Ten minutes later, chilblains stinging my hands but what the heck, I was back out in the street with my mates … throwing snowballs, building a snowman, making the best of that loveliest and most memorable white Christmas ever.

In Monday's Derry News, Brian recalls his school days, meeting a 'beautiful wee Derry girl' and being injured in an IRA bomb attack.