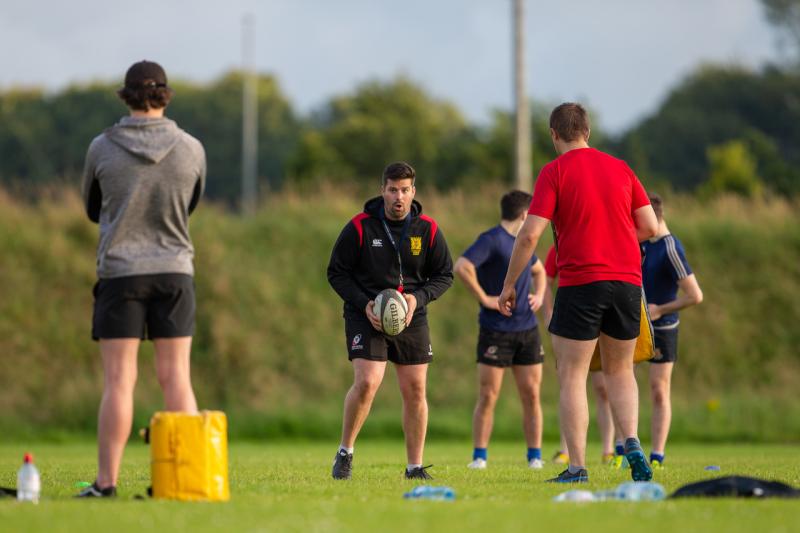 One more game. That's all they needed. Twelve months after surrendering the league title on the final day, Limavady were untouchable at the top of the table. A 36-13 victory at Ards saw Graeme Eastwood's side with one hand and the four fingers of the other on the trophy.

With 12 wins from as many games, as well as 11 bonus points earned, Limavady accumulated 59 points out of a possible 60. The club's seconds were second in the league and had a Forster Plate semi-final to look forward to.

The first team had five of their six remaining league games at home, where they were unbeaten during Eastwood's tenure. Just shy of their meeting with second placed Ballymoney, Covid-19 dragged the sporting landscape to a halt and with the finish line in sight, their season of effort was gone.

“We tried not to speak about it too much,” Head Coach Graeme Eastwood told the County Derry Post, with a tone engulfed by acceptance. His focus is on the now.

After an extended break, Limavady gathered in recent weeks to pick up the pieces and plan for next season.

“The boys took up where they left off, had a super attitude and we didn't lose too many players,” Eastwood continued.

Scrum-half Jamie Millar transferred to City of Derry in search of 'first XV rugby' and hooker Luke Montgomery found travelling up and down to Belfast for training and games not sustainable. Both are from Limavady and the door will always be open.

“We can't hold them back from playing rugby somewhere else, we wished them well and they will be back at some stage,” Eastwood said.

Last season wasn't the only time Limavady were pipped at the finish line. In Eastwood's first season, 2018/19, they topped the table by a point before losing the title with a defeat in the final game. 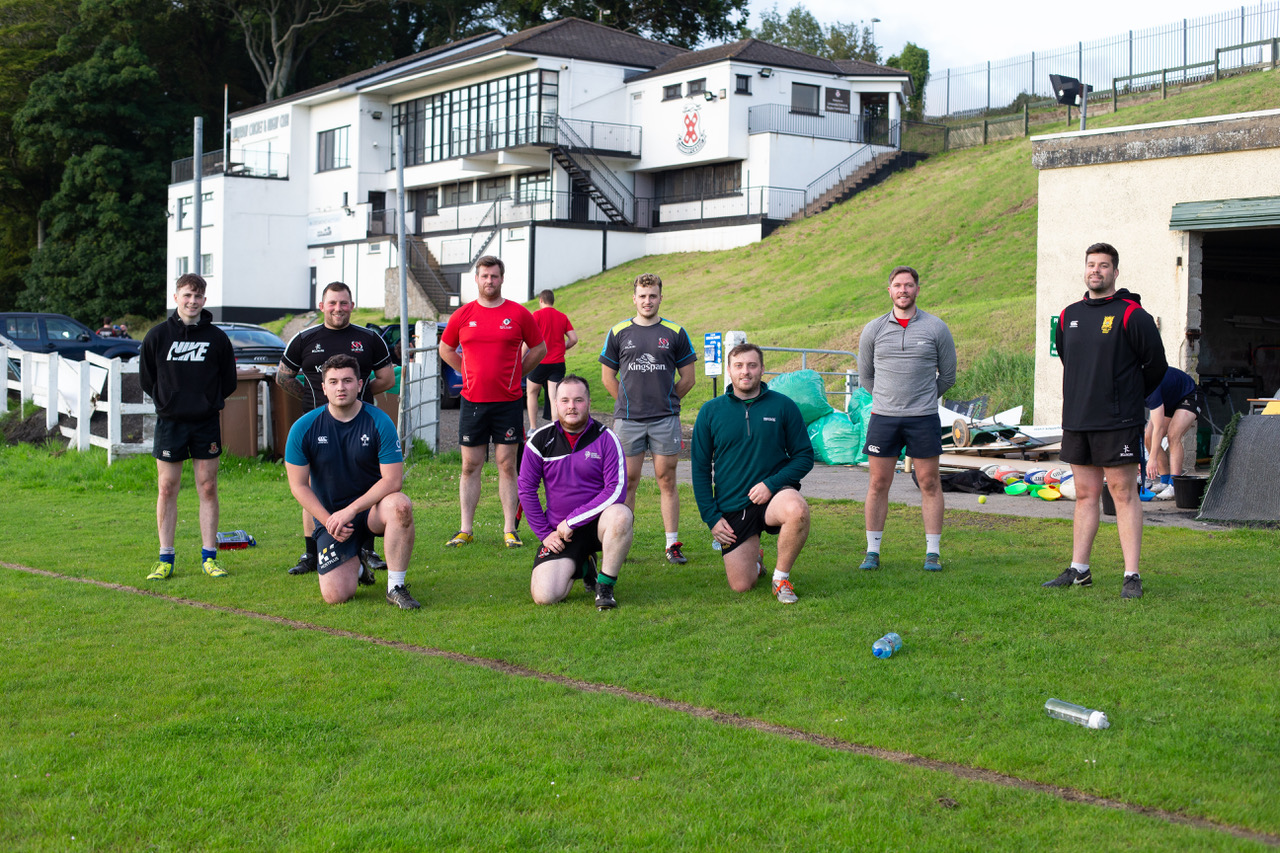 Coaches with some of Limavady’s new signings (Pic: Steven Haslett)

“From a coaching point of view, the improvement is important. We hardly won a game up until Christmas, the year before I came in, and the following year it (challenging for promotion) shows how much work the boys are putting in.

“To go unbeaten last season, it shows the boys have been putting the invaluable work in on the training pitch. There were a few of them flirting with retirement, but every one of them is chomping at the bit.”

Eastwood believes the club is in a strong place, both on and off the pitch. An acquired grant helped kit out the club's gym and they now have access to three grass pitches, as well as the 3G facility at Scroggy Road.

“As a club in the North West, if you look at how Coleraine reacted last year, we were above Ballymoney and City of Derry were at the bottom of (All-Ireland) 2C,” he points out.

“We would like to think we are well up there and are attracting players from Coleraine, Ballymoney and Derry, who want to come to us to play an attractive brand of rugby and to a club on the up.

“We have a few boys around 35 and 36, but the average age is in around 24, 25 and 26. That team could stay together, if they want, for the next four or five years and try and be successful.

“As a club, we want to go up (to Championship 1) and we want to challenge again at the top end of junior rugby. Whatever way it has happened, we have not been able to do that. Hopefully this season we can try and rectify it,” Eastwood hopes.

One of those flirting with the idea of retirement was Jody McMurray, who doubles up as assistant coach after moving to the club with Eastwood.

“He (McMurray) runs the backs and this is probably his last year donning the boots, so he wants to go out with a bit of a bang,” Graeme reveals.

Peter Wilson mixes playing with his duties as the skills' coach, with Oisin Quinn now going into his second season in charge of the team's Strength and Conditioning.

“He has worked wonders,” Graeme endorses. “He is very good with the injury prevention stuff, touch wood last season we had a broken bone here and there, but we didn't have one muscle strain and his inclusion is invaluable to us. He had the boys in tip top form.

“For someone new to the rugby setup, he has really put his hand up to what we are trying to do over the last 12 to 15 months,” he said of Quinn, who has worked with Derry GAA teams and owns his own gym.

“He has been a great addition to our coaching team and we are grateful he is staying for another season.”

On the field, Limavady have had a productive off-season, with 16 players joining the panel, against only Jamie Millar and Luke Montgomery's departures. In particular, there has been an improved link with the local Limavady Grammar School.

“We have got a really good connection and we are trying to build that link. Like every sport, having that link between schools and the youth setup is very important. Teams can't survive with bringing in players (from outside) every year,” Eastwood added.

He has high hopes for Ben McMillan, who has came in as hooker from the school, prop John McMichael returns from the Academy and another from the Grammar School, Joe McCartney, younger brother of full-back Jim.

“We have a really good mix,” Eastwood continued. “On top of that, we have brought in Craig Huey (City of Derry) who brings over 10 years of AIL senior experience, Jack Beattie a winger from Derry who played at Ulster youth level has also joined.

“We have kept Jody McMurray, who has over 10 years experience, and Stuart Morrow who is an ex-club international.”

Eastwood feels his side punches above their weight and with the disappointing end to the season, there will be a renewed vigour to finish the job this time.

“All we can do is prepare as best we can and hopefully everything unfolds in front of us”, he said, referring to the complications of preparing a team with the cloud of a second Covid spike a possibility.

“We know it is going to be difficult, other teams will be playing catchup and will have done their best over the summer to make sure they are strong as possible

“I always day 'if we keep our own house in order' and worry about how we train and play, then we will never be too far away,” Eastwood added.

He feels the club would hold their own in Division 1, should they advance at the end of the season when it begins.

“If you look at where they (Limavady) have come from, six years ago they were in Division 3 and not knowing where they were going.

“Now you have ex internationals and boys leaving AIL clubs to come to Limavady because of what we are trying to do down here, it is exciting times,” Eastwood states.

It's all with the sobering thought of needing to deliver. He uses the statement - nobody remembers anybody that doesn't win anything – to remind himself of what is at stake.

“We are unfortunate, in that we could've had two league titles in two years. We got beat in the semi-final of a junior cup, we won the conference Division 2, one the club has never won.

“We want the big one. If you are top of the tree after 18 games, you are the best team that season and hopefully we can go a bit further this year and try and win it.”

That's the focus. It is that simple. Eastwood has organised games with AIL side Ballymena and Ulster Division 1 side Cooke for September.

“They are two good tests, so we can be where we want to be at for our first league game. It will give us a few weeks to fix anything we see is needing addressed,” Eastwood concludes.

The new season is about unfinished business.