SIDELINE VIEW: Measuring against the Kingdom

Derry need to stop the uncontrollable turnover of players 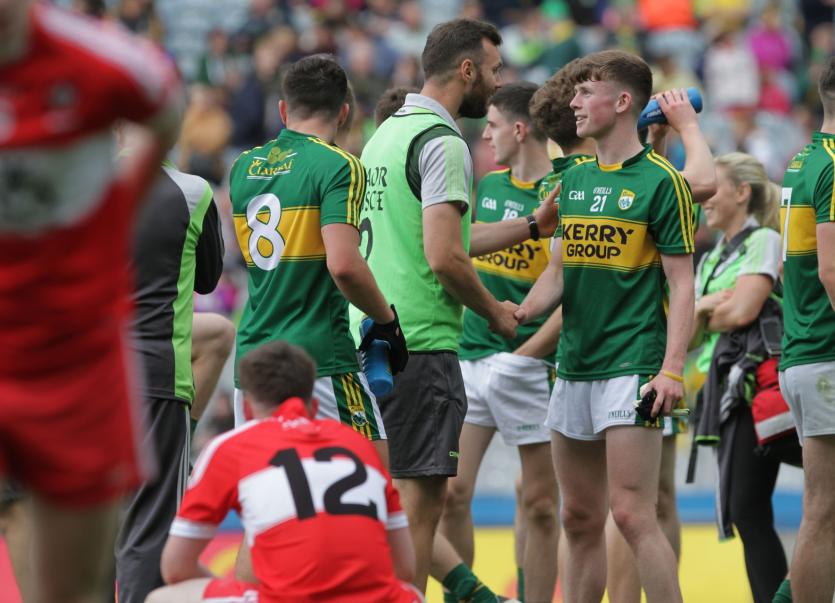 Derry produced the shock of the 2015 minor championship to sink red-hot favourites Donegal on their way to a first Ulster title in 13 years. It signalled the start of the county's return, but on a national level they were nowhere close to toppling Kerry. This week, Michael McMullan trawls back through the record books.

The 2002 All-Ireland was the model title. An underage production line, with 14 clubs represented on Chris Brown's starting team brought Tom Markham back north.

It was a performance that warmed the cockles of the Derry fans. Expressive football, mixed with Michael McGoldrick, Gerard O'Kane and Joe Keenan leading a defence that broke the hearts of forward lines across the land.

The following year, with six of the team underage, the Oakleafers were tipped for glory again until Damian 'Daisy' McDermott's goal grabbed victory for Tyrone in the first round.

It began a tale of woe for Derry's minor grade, which petered off after Maghera's 2003 Hogan Cup win and MacLarnon Cup win 12 months earlier for St Columb's Derry. Like decades before it, school and county minor success drip-fed into the overall pick for senior managers, an addition to the club's pathway. The county U21 team didn't push on like it needed to either.

The All-Ireland minor final of 2007 was a rare highlight in a 12-year drought. Aside from that run, the county registered only three other first round wins – 2005 (Monaghan), 2008 and 2012 (both over Donegal) until Damian McErlain's side sparked the current resurgence.

At school level, there was also a blip. St Pius Magherafelt and St Paul's Kilrea both won All-Irelands in 2009, but that was the end of the line until Maghera rose from the ashes again. Derry won back to back Buncrana Cups at U16 level, but were shocked by Fermanagh at minor level in 2011 when it was their minor time, as the rut continued.

In the senior ranks, the county were in a strong position. A NFL title came to Derry in 2008, with a run to the final the following year – both against Kerry. There was a run to the Ulster U21 final. Ballinderry, Greenlough and Lissan all reaching Ulster club finals at their respective grades, with Shamrocks' minors picking up a fourth minor title at St Paul's.

Not pushing on from here, as a county, was a missed opportunity.

Things began to fall away. Three years in Division 2 followed, before a rise back to the top level and another league final and a hammering by the all-conquering Dubs.

Then came a free-fall from the top. Score difference saved Damian Barton from a drop to Division 3 in 2016 but this was followed by back to back relegations before Damian McErlain steered them back from the basement.

'Macker' has since stepped down, to be replaced by Rory Gallagher, but before Covid-19 brought sport to a standstill, Derry's chances of a return to Division 2 were unlikely at best.

Looking back at Derry's comparison with Kerry, the Kingdom have won two All-Ireland U21/U20 titles since Derry's 1997 triumph.

Former Kerry senior boss Éamonn Fitzmaurice was on the winning team in 1996 and 1998 (sandwiched by the last of Derry's two titles) and lack of silverware at that grade worries him.

Fitzmaurice handed 18 senior debuts (seven in the championship) to players from the minor teams of 2014 to 2017. Peter Keane, a minor selector under Mickey 'Ned' O' Sullivan in 2012 and 2013 before succeeding Jack O'Connor as manager for the remainder of the five-in-a-row, took the number to 22 when appointed as senior boss. Fourteen have played in the championship.

In the same time window, playing two and three tiers below Kerry, 24 Derry players have made it through to senior level. Paul McNeill, Peter Hagan and Danny Tallon played under Richard Ferris in 2014, the rest were part of Damian McErlain's minor tenure, with 11 in all graduating to championship level.

The staggering statistic is the contrast with Kerry, in scoring power, from players who have came through. Derry's 2015 minor team was a well-organised unit. Shane McGuigan was the reason they won the Ulster title and he still remains the best forward in the county by some margin.

Killian Spillane, with three of his Templenoe club-mates, bridged the gap from minor to the senior panel by playing in the Kerry junior team. Last year, in his debut senior season, Peter Keane handed him a fifth championship start in an All-Ireland final and he bagged 1-1. Dara Moynihan, Miceál Burns and defender Tom O'Sullivan have all contributed to the scoreline.

Stats are indicators and don't always tell the full story. Style of play is an influence. Rory Gallagher was slated before a ball was kicked with Derry about his defensive brand of football.

From watching games this year and under previous Derry managers, Rory is no different. Two men and sometimes one stay up front. There is a link player and everyone else appears briefed with flooding the middle and keeping possession. From watching the teams Derry come up against, what else are you supposed to do. Louth and Tipperary came to the muck and clabber of Celtic Park and parked the bus. Maybe even two or three.

Damian McErlain found the same. And every manager before him, struggling to play against the blanket. Remember the 2019 Division 4 league final? Derry went through a spell of giving the ball away cheaply. Against a Kerry or a Dublin they would've got hammered.

From talking to Kerry's Eye Sports Editor, Sylvester Hennessy, an analyst under Peter Keane, who is now helping with Limerick. He points out the difference is night and day, once you go down the divisions.

You still need killer forwards to play attacking football at senior level. Much is talked about youth football, but the Derry club scene isn't coming down with enough candidates.

I am thinking of Derry's trip to Páirc Esler. They were squeaky clean in possession. In fact, their setup was spot on. With another steady head and an eye for a score, they'd have beaten both Down and Leitrim. That's the reality. Organisation and brawn will only take you so far. Finishers win prizes.

Even Donegal, who were so negative in the McKenna Cup clash with Derry, are expressive when they head out of Ulster.

Hennessy, like Éamonn Fitzmaurice, speaks of the attacking brand of football in Kerry. Fitzmaurice stresses how kids want to be the next Gooch, Clifford or Mickey Sheehy. He mentions the 'way football is played' allows forwards to 'develop their craft'.

Both men mention the 2017 U16 Paul McGirr final, a thriller won by Pobalscoil Chorca Dhuibhne after extra-time. Fitzmaurice remembers and asks about the 'blondie fella' (Alex Doherty) up front for Maghera. Hennessy was covering the game and also enquired of Doherty's progress.

Éamonn refers to Maghera's impressive Hogan Cup final performance in 2013 and Danny Tallon's name comes up in the conversation. Conor Convery's nine points in the 2014 semi-final win was enough for Fitzmaurice to have his prize defender Brian Ó Beaglaoich keep tabs on him in the final.

“That is different over the past couple of years for sure, I would've thought in the past that the forward culture wouldn't have been that different between the two counties.”

Going forward, it has been encouraging to see Paul Cassidy and Matthew Downey at club level in the past year. Cassidy's performance to save Derry U20s from defeat against Armagh was tantalising.

Shane McGuigan is crying out for help. As a trio, it could be a decent foundation. Behind this, schools, club and county coaches must produce more of the same from the 'wheelie bin' type coaching of lockdown. With it, needs to come a pressure to change the outlook.

Defensive football is perfect for stabilising a team. Derry and Kerry minors were the perfect example. Niall Keenan marked their 2015 dangerman Conor Geaney out of the game, but up popped the unknown quality of Michael Foley to sink Derry. As for the Kingdom's 2016 and 2017 model, they would just give you nightmares.

The elephant in the room, one that can't be ignored is the colossal turnover of players. From the start of Damian Barton's tenure, in 2016, Derry have used 82 players (yes 82) in league and championship, with 52 featuring in the latter.

To give the numbers some context, Donegal reached three Ulster finals, winning two, during this same spell, using 58 players in league and championship. Monaghan have used 47 players.

This is something that Derry are going to have to nail, if the current underage development is going to bear any fruit. Between players leaving panels, managers having different opinions and the lure of the US in the summer - its impossible for anything to blossom.

There is a culture of expectation to be a starter and when players are not making the cut, pressure comes from club managers about 'wasting their time' with the county. Granted, it is easier for a panel player to hang around many of the top counties with the chance of winning silverware and the carrot of maybe a team holiday at the end of the season for getting to a final.

Another huge issue is a lack of midfielders. When Down pushed up on Derry in Newry, there was nobody to pluck a ball from the skies. A qualifier a few years ago against Laois was the same. There is not much you can do without the leather.

Hand in hand with this, comes the debate about AFL. Conor Glass, Callum Brown and Anton Tohill were not the finished article. There is Kealan Friel coming through, a late bolter, as termed by U20 boss Mickey Donnelly, having not progressed through the county minors.

The days of the short kick-out are fading. It does have its place, but without any size at midfield there can be no plan B.

Like the lack of scoring forwards, a return to producing midfielders needs to figure high up any coaching plan for the future. One that must start now.

Unless club, school and county are united, and properly, then little change can be expected. And Gerard O'Kane's team of 2002 and Derry's 2001 senior team will be as far away as ever.

- Counties need to look in the mirror to fend of AFL clubs.  More...

The tree landed on top of a trampoline and swings.