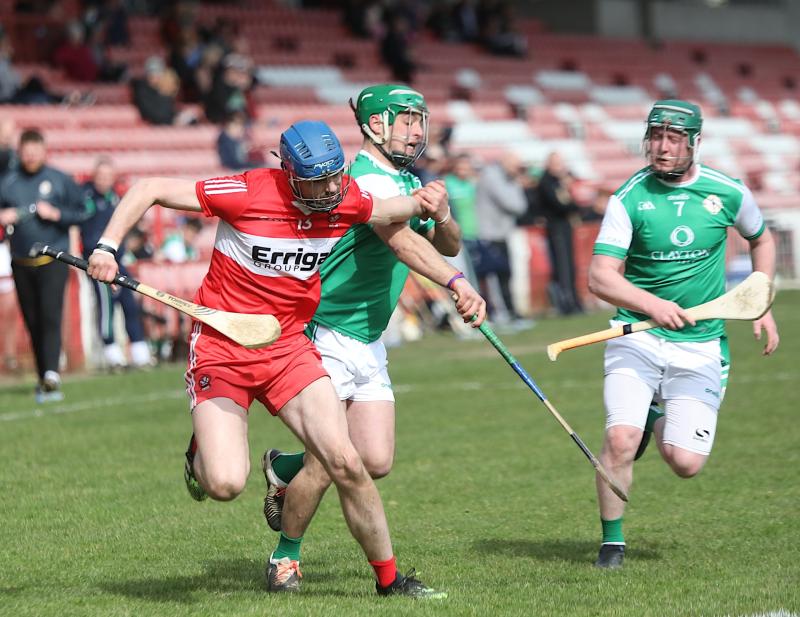 Derry will go into their promotion play-off game with a perfect league record after they made it five wins from five with a comprehensive second half scoring display against London in Celtic Park.

Playing into a first half wind, Derry struggled to get into any real rhythm in the opening 35 minutes and with captain and top-scorer Cormac O’Doherty amongst players rested, the teams were level at 0-8 apiece at the break.

But it was a different tale altogether in the second period as the Oakleafers held their opponents to just one score – a Ronan Crowley free – meanwhile Dominic McKinley and Cormac Donnelly’s men ran riot on the scoreboard, with nine different scorers in the end.

After a slow start to the game it was the visitors, with the wind at their backs, who opened the scoring on four minutes when Ronan Crowley arrowed a free over the bar from 50 metres out.

The home side were on level terms on nine minutes when Deaghlan Foley – in the absence of captain and free taker Cormac Doherty – took on the dead ball responsibility to slice over from close range.

Some loose play in the Derry defence led to London regaining their lead, with Matthew Feaneay latching on to the ball and slotting over the game’s first point from play.

Another Foley free, from a similar position to his first, had Derry level again but, from the puck-out, Donal Hannon pinged over a long-range effort to give the men in green a 0-3 to 0-2 lead after 14 minutes.

Padraig Muldoon took possession on his own 13 metre line as he broke down an Oakleaf attack and played it for Jack Goulding who linked play well with a sharp pass up the middle of the field for Feaneay to add his second with an effort that floated over with the assistance of the wind.

The visitors continued to play on the front foot, with shots from Goulding and Crowley dropping short for Oisin O’Doherty to clear but it was Derry who got the next score when Brendan Laverty was fouled 25 metres out for another free for Na Magha’s Foley to slot. 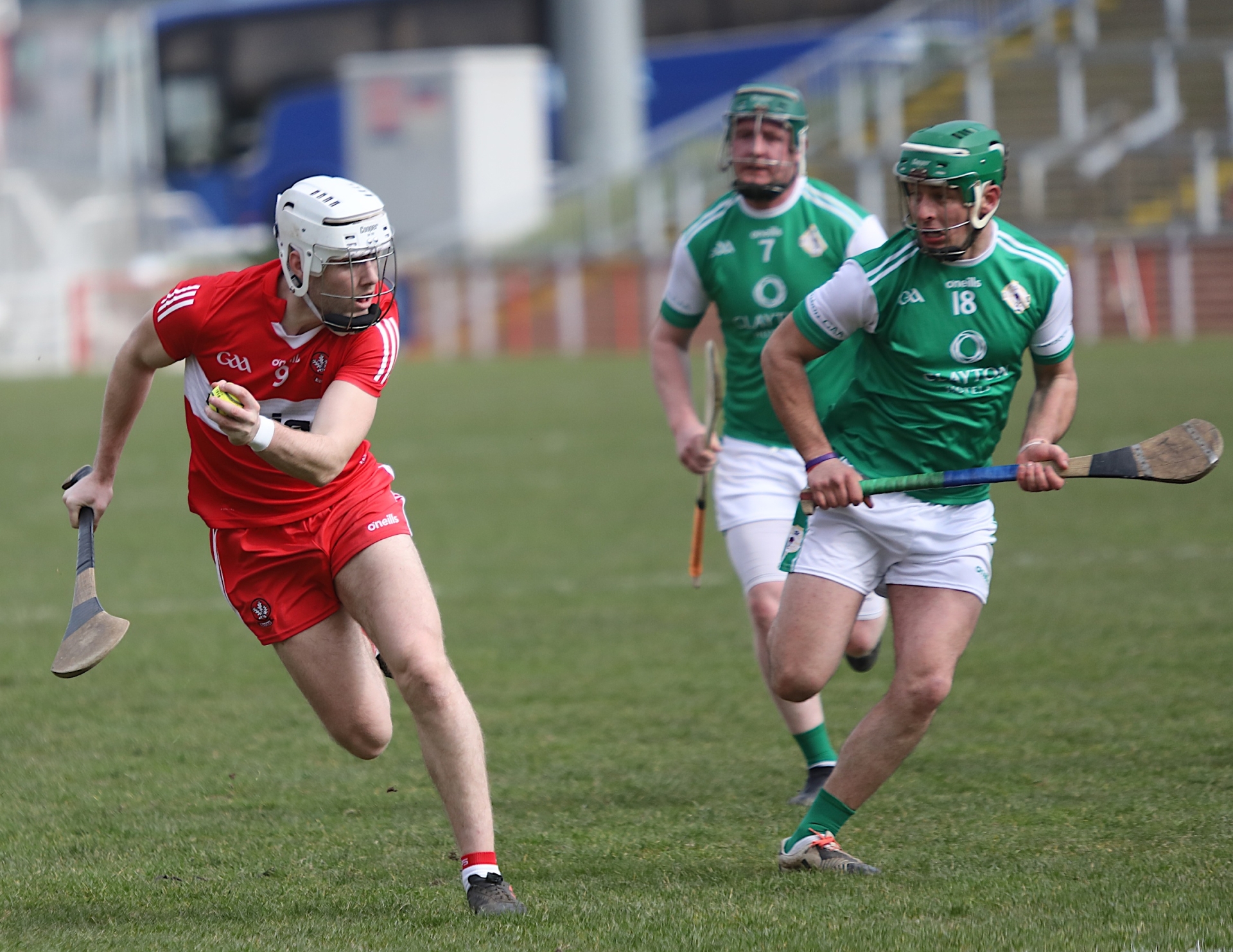 Derry’s first from play came on 22 minutes when Gerald Bradley – who was now pushed into the forward line - won the ball in the right corner before manoeuvring the space to come inside and split the sticks.

The first goal chance came moments later when Goulding did well to spot Colin Nelson free on the left side of the net, but his low drive from the angle was brilliantly saved by O’Doherty who got down low to block it.

The home side took the lead for the first time on 23 minutes when Slaughtneil’s Bradley again got the better of Paddy O’Toole to add his second in quick succession.

London got their first score in 13 minutes when Feaneay again got on the ball for the visitors and converted another impressive score from distance. And they were back in front with five minutes to go in the half when Brendan McCarry won a long ball ahead of Paddy Kelly on the right sideline 50 metres out and popped over an exceptional score off the shoulder. Kevin McMullan’s men extended the gap to two with another great score as Jack Goulding held off pressure to raise a white flag.

Laverty stunted the London momentum when he grabbed hold of an Aodhan O’Hagan ball in to strike over, and the scores were level again on 35 minutes when Bradley did superbly under the high ball and was fouled by O’Toole – who got a yellow for his troubles – as Foley converted his fourth free.

A long-range Dean Bruen point and a sliced effort from Laverty closed out the half as the teams went in level at the break.

Derry started the second half with real intent and when Ryan Mulholland was fouled just inside the ’65 on the left wing, Foley stepped up with his best free of the game.

It was quickly followed by a nice score from play off the hurl of Darragh McGilligan before Mulholland made it 0-11 to 0-8 with 39 minutes on the clock.

The midfielder was then alert to a Collins puck-out to nip in and add a second to his tally before London got their first and only score of the half as Crowley slotted a close range free to reduce the gap to three.

An interception from the alert Brian Óg McGilligan set up a chance for Darragh McGilligan to fire over a quality point on 45 minutes before he turned provider for Bradley who did well to grab hold of the arrowed pass and convert from a very tight angle.

The Slaughtneil man took his tally to 0-4 on 51 minutes when he found himself in space on the left and stroked it over for a six point lead. A call for picking it off the ground on Brian McCarthy saw Tiarnan McCloskey – on free duties after the departure of Foley - add his name to the scoresheet on 57 minutes to make it 0-16 to 0-9.

The relentless Derry attacks didn’t stop, and after Mulholland was afforded acres of space in the middle of the park, he played a sharp pass into Bradley who got ahead of Dean Bruen to point.

A second free from McCloskey – this one from outside the ’65 – put nine between them before Padhraig Nelis was adjudged to be fouled and McCloskey added a third dead ball to his name, this one from much closer range. 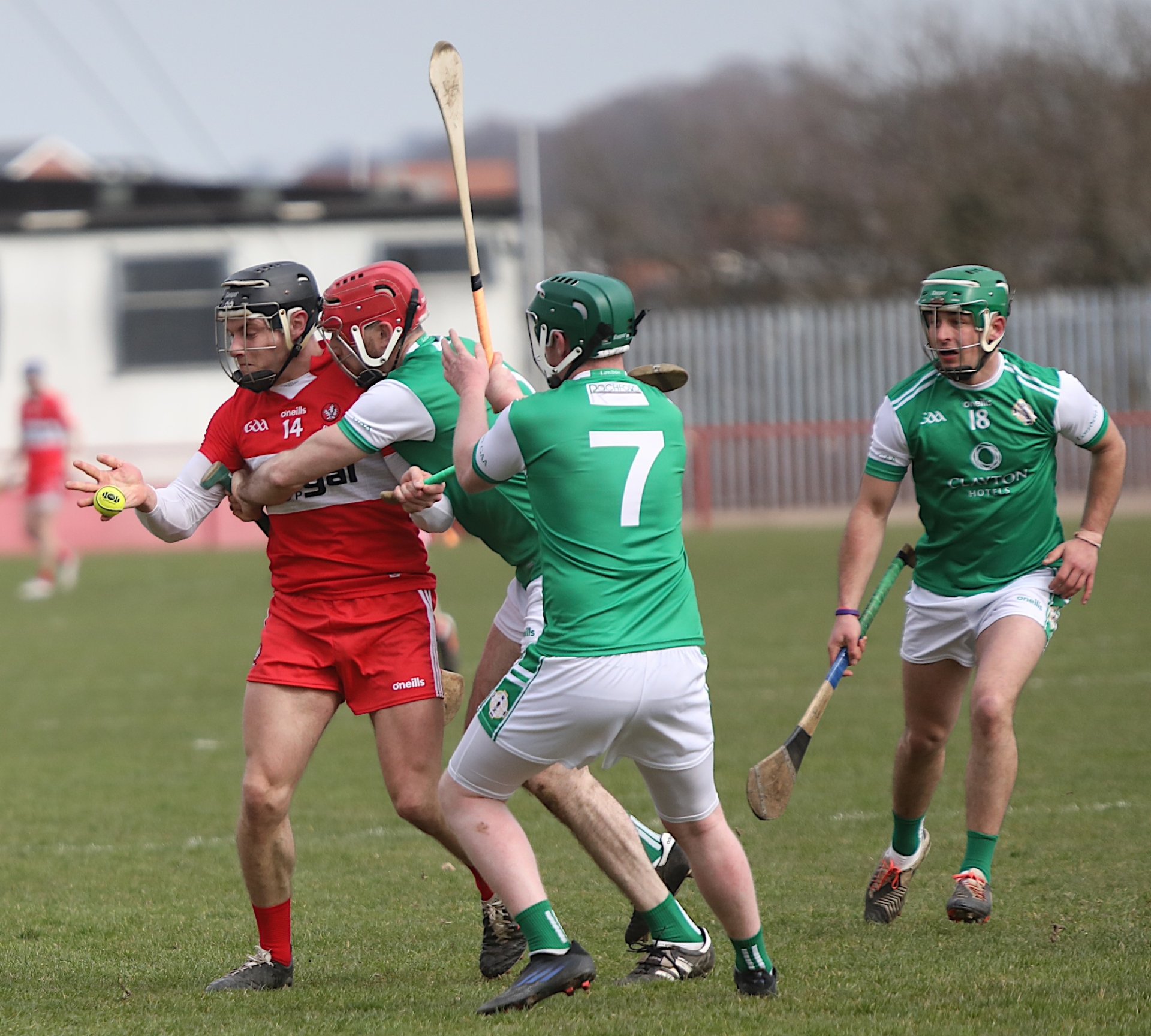 Substitute Tiarnan McHugh made it 0-20 to 0-9 heading into the final ten minutes and, after Feaneay was frustrated to see his effort waved wide at one end, John Mullan had a white flag raised at the other.

A Nelis shot on goal whistled just wide before Mulholland and McGilligan added further points to make it 0-23 to 0-9. Gabriel Farren was next and last name on the Derry scoresheet with a driving run and finish through the centre of the field before Bradley rounded off the game with a score in injury time.

GAME AT A GLANCE:

MAN OF THE MATCH - Ryan Mulholland - In a changed line-up that took a while to get into its rhythm, Muholland put in a sold shift in the Derry engine room. He scored a few and was always available for the pass to link up play.

TURNING POINT - Using the advantages – London did well for period of the first half, but – with the wind at their backs - some poor wides and shot selections cost them and they couldn’t convert their pressure into points. Derry punished them with three scores in the opening minutes of the second half to start building a lead.

SCORE OF THE GAME - McCarry point – It didn’t look like a scoring position when Brendan McCarry won the ball on the right sideline, 50 metres out from goal, but the forward threw a dummy to engineer some space and spun sharply to find the target.