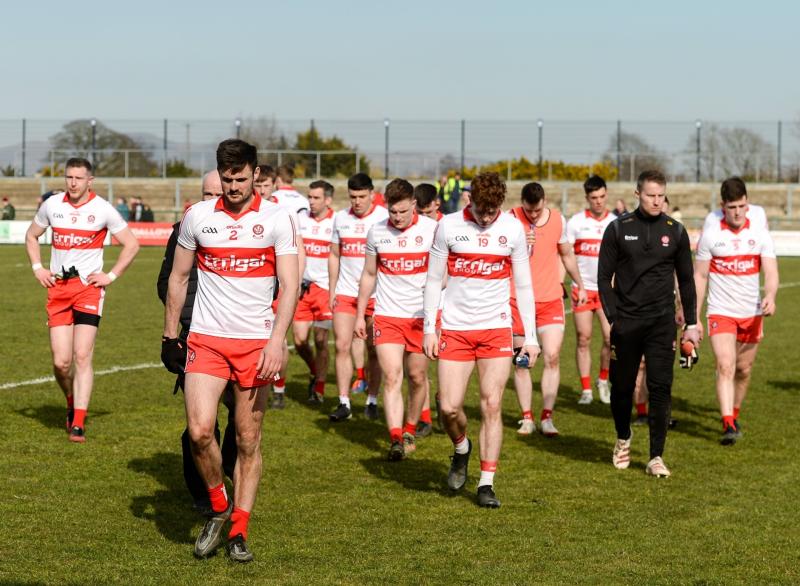 The Derry players lead by Christopher McKaigue leave the field after being defeated by Galway. Photos: Oliver McVeigh (Sportsfile)

Derry’s 12-game unbeaten league record came to a crashing end at home to Galway at blustery Owenbeg on Sunday.

The defeat puts Derry on the back foot in the promotion race and Rory Gallagher’s side need Galway to beat second-placed Roscommon in the final round of games next weekend.

Goals from Man of the Match Matthew Tierney, Damien Comer and Dessie Conneely had the Tribesmen half way to victory as they led 3-8 to 0-4 at half time.

The half time score left Derry shell-shocked as they had come into the game having failed to concede any goals in their previous five games. But Galway took full advantage of a stromg wind at their backs and showed no mercy, taking their chances when they came to leave Derry fighting for scraps in the second half.

Tomo Culhane added a fourth goal in the 40th minute put the game totally to bed with a 4-8 to 0-5 lead and only then did they take their foot off the pedal.

After five consecutive clean sheets in the league so far, the concession of four goals left Derry fighting an uphill battle, one they never looked like overcoming.

Ciaran McFaul kicked thee long-range points as Derry got a slight foothold in the game, but it was a case of putting a degree of respectability on the scoreboard.

Galway had Paul Conroy sent off for a strike in the 58th minute.

The win puts Galway top of the table and back in division one, with Derry’s feat not out of their own hands.

“It was a big challenge for us but it got away from us fairly early on and it wasn't good enough,” commented Derry manager Rory Gallagher.

"I think we conceded at least two goals from our own kick-out. They put a big squeeze on it and I just felt we made a couple of very simple errors and handed them a massive initiative. It was a five or six point breeze but instead of that it ran to 12 or 13 points by giving away bad goals. 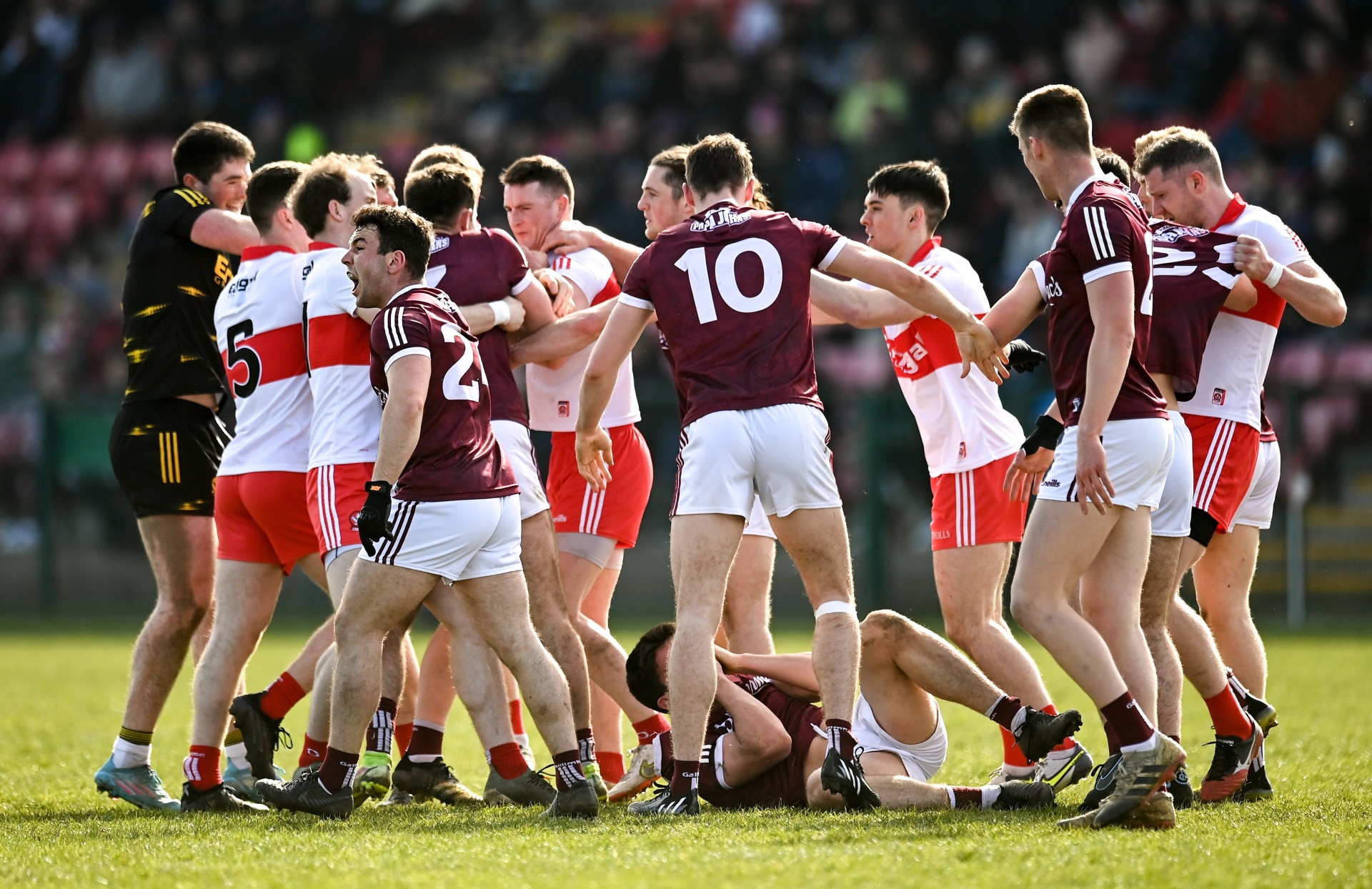 Players from both sides tussle in the second half of the Allianz Football League Division 2 match between Derry and Galway at Derry GAA Centre of Excellence in Owenbeg, Derry. Photos by Oliver McVeigh/Sportsfile

"It was something we had anticipated coming going to come from a better quality team but we didn't react well to it and it was poor.”

The sides were level at 0-1 each early on before Paul Conroy and Dessie Conneely put Padraic Joyce’s side ahead.

Derry won the toss and elected to play against the breeze in the first half, but struggled with their kick-outs as Galway closed them down.

Galway hit their first goal in the tenth minute. Comer ran along the end line and when Conroy squared the ball Matthew Tierney palmed home at the far post.

Comer blasted to the top corner for Galway’s second goal three minutes later, putting them 2-5 to 0-2 ahead.

With one minute remaining, Conneely hit a third Galway goal and they may have had a fourth only for Sean Kelly’s shot being blocked by the feet of Odhran Lynch.

28 schools across NI have been awarded funding under the Major Capital Works Programme.

Leading 3-8 to 0-4 at the break, Galway added a fourth goal with substitute Tom Culhane’s first touch.

Niall Toner, Emmett Bradley and Ciaran McFaul (3) notched points in Derry comeback that little other than a damage limitation exercise. 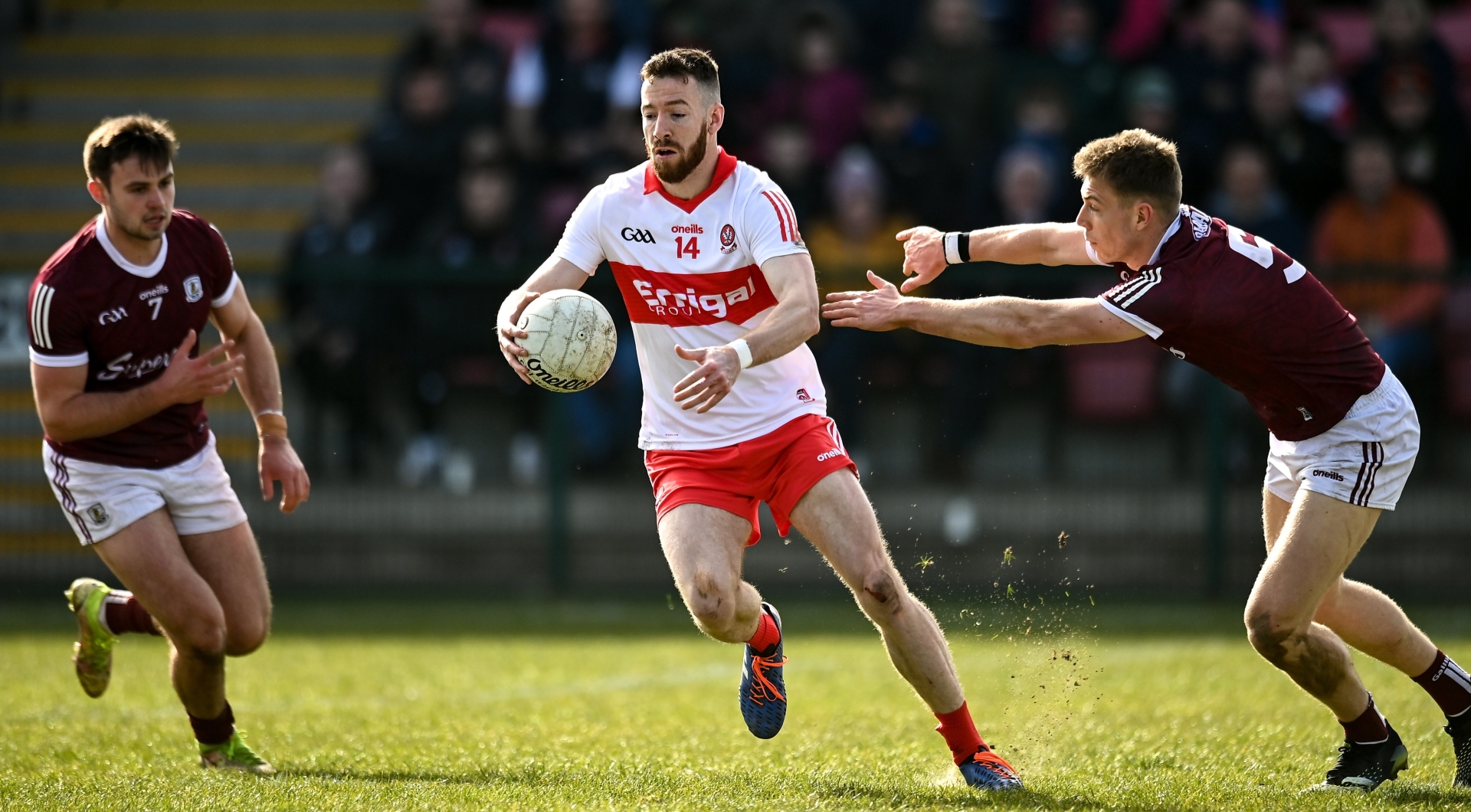 Niall Loughlin of Derry in action.

"I've no idea what team Galway will put out,” said Gallagher of the final round of game next Sunday.

“All along it was in our hands and it is not in our hands any more. If that is the case and we are not good enough to beat Galway or Roscommon, that just might be it.