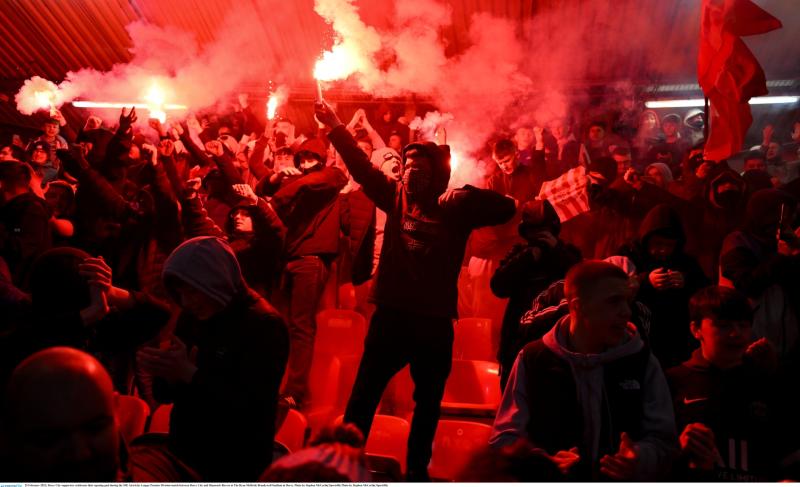 Flare usage has been one of several problems Derry City have faced this season.

Derry City FC's Board of Directors has warned that fans will face a lifetime ban from the Brandywell if recent occurrences of flare usage, pitch incursions and throwing objects onto the playing surface continues.

The club have revealed they have already paid out £3,000 in fines due to flare usage already this season, but that is just one of the problems it faces at the minute due to the behaviour of a certain section of supporters. The recent game against Shamrock Rovers in particular saw fans invade the pitch and took the shine of the last-minute victory over the champions.

This continued behaviour, the Board of Directors insist, will no longer be tolerated.

"Derry City FC are presently sitting top of the League of Ireland Premier Division and despite injuries to key players, the team has provided us with an excellent start to the season.

The full stadium and the continuing demand for season tickets is helping create an atmosphere and excitement that is the aim of every club.

Despite the positives, one disappointment has been the behaviour of a small number of our own supporters as well as an equally small number from visiting teams.

Lighting of flares, throwing objects onto the playing surface and encroaching on the pitch during and after matches is behaviour that has consequences for the football club.

It is important that all of us who attend our home games feel welcome and safe.

It is a delight to witness the number of families attending matches; grandparents, fathers, mothers and children and especially persons with disability.

Will Patching: 'There's a lot more to come from Derry City!’

The club has every intention of ensuring that everything possible is done to maintain and even enhance those high standards.

Our supporters should know that the club was annoyed at some of the behaviour at our opening home match against Shamrock Rovers and, arising from that, extra stewards were employed for the following two matches.

Concurrent with that, an enhanced use of CCTV has also been implemented to make it easier and more conclusive in the identification of individual offenders.

Derry City FC has let it be known that offenders will be banned for life and has ordered its stewards and officials to ensure that potential offenders are aware of that instruction.

Evidence of offences on individuals will be passed to the police.

The club has also instigated a full review, so that the most effective stewarding arrangements can be implemented and sustained.

There is some difference of opinion among supporters about the use of flares. Some will argue that they add atmosphere to the occasion, however FIFA has ruled that they are a Health and Safety issue and insist that clubs are punished for their use.

It has already cost Derry City over £3000 in penalties, and we are still in the early days of the season. That is money that could and should be put to much better use in our development.

Other clubs are having similar or greater difficulties with the use of flares and the behaviour of a small number of supporters. Derry City is in a unique position, playing in a different jurisdiction to the other clubs in our league.

We owe it to our history that the Ryan Mc Bride Brandywell Stadium is an exemplar.

The Board of Directors is issuing this statement to assure our supporters that everything possible is being done so that our proud history is in no way besmirched."