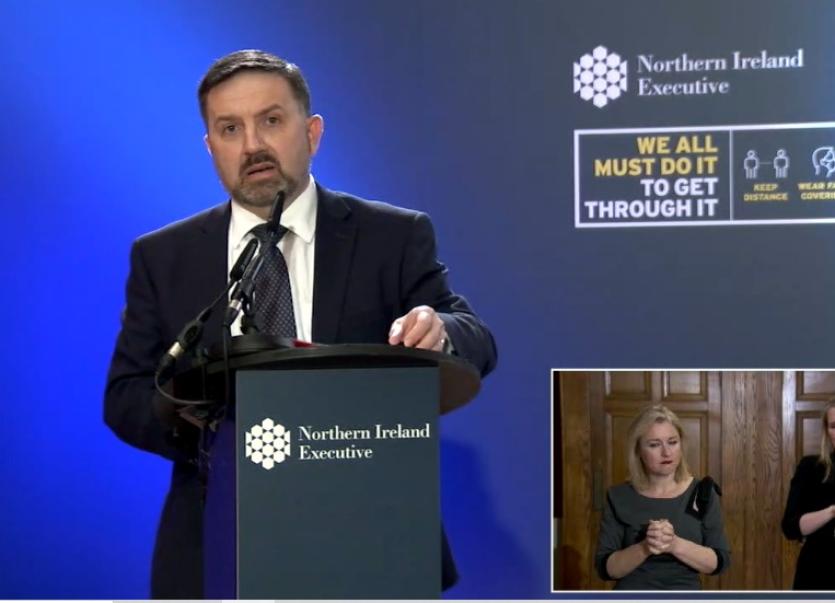 Health Minister Robin Swann has today said that Christmas is a time of ‘hope and togetherness’ but advised that the ‘greatest gift’ people can give loved ones this year is to look after them.

While restrictions will be relaxed for a few days, he warned, ‘maximum vigilance’ is still required.

“A festive free-for-all will lead to a New Year crisis,” Mr Swann added.

He said that if people do the right thing during the two-week lockdown starting on Friday, then more of us will get to enjoy Christmas, and there will be fewer empty chairs around the dinner table.

It has also emerged that some schools are making plans to close early on December 11 but the Education Minister Peter Weir insists that school holidays will not be extended.

Derry City and Strabane recorded 67 new Covid cases in the past 24 hours bringing the overall total to 6,690.

While the rate of infection per 100k of population is almost three times lower than when the council area entered its local lockdown on October 5, it remains the second highest in NI at 187.8.

Since last week three more people have died in Derry City and Strabane.

That means that 55 people have died in the council area over a seven-week period.

The latest person to die was a man aged between 60-79 and it occurred in the community on Monday.

Altnagelvin Hospital has 56 Covid inpatients, four of whom are in intensive care.

It remains stretched to capacity at present.

First Minister Arlene Foster and Deputy First Minister Michelle O’Neill have signalled temporary arrangements that will be put in place for the Christmas period.

It is intended that up to three households will be permitted to form an exclusive bubble between December 23 - 27.

Meanwhile, speaking at this afternoon's press briefing Minister Swann said the Covid fight enters a new phase this weekend with a two-week lockdown.

People have been advised to work from home and only leave for essential purposes and exercise.

He says it's an opportunity to turn things around after a year of ‘great loss’.

He said: “Our actions now will have a huge bearing on the Christmas that we can have.

“So please do your part, stay at home, keep your distance from others if you have to go out, wear a face covering, wash your hands and self-isolate when required.”

Actions can help to reduce the pressure on Covid, the health minister said, and allow hospitals to maintain as many services as possible.

Mr Swann announced that preparation work is under way for a mass Covid-19 vaccination programme, a huge logistical undertaking, that will span several months.

Already 600 people, including retired health professionals, have come forward to volunteer as vaccinators.

In addition, within health Trusts there are 880 peer vaccinators.

Mr Swann said the pandemic has highlighted the need for sustained investment in the health service.

The overall vacancy rate for registered nursing and midwifery staff by the end of September was 7.4 per cent which has dropped to a level last seen in March 2017 and a ‘major improvement’ from the peak vacancy rate of 13.1 per cent in June 2019.

He did however accept that there is still a long way to go.