‘This debate was only the beginning, we now need to see some action’ 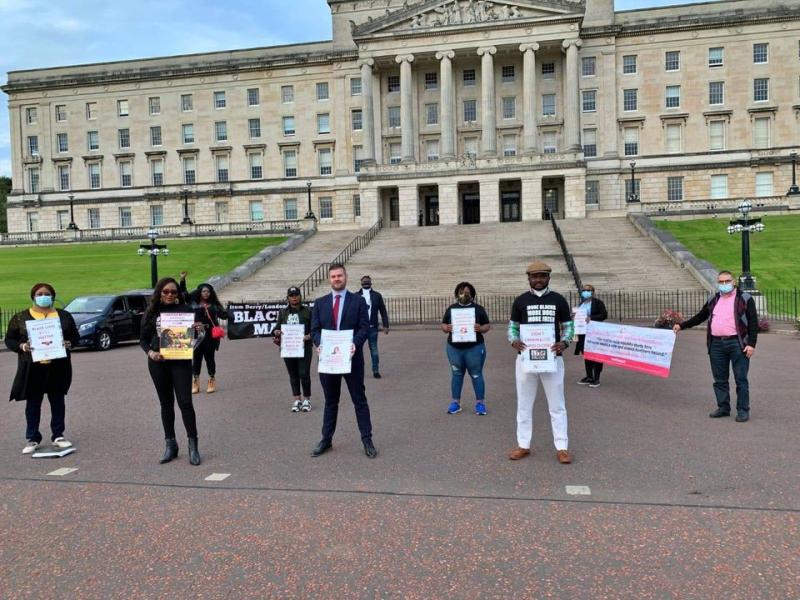 Lilian Seenoi-Barr led a protest outside Stormont on Monday

North West Migrants Forum in Derry has welcomed government acceptance that its racial equality strategy is outdated and needs direct input from people with ‘lived experience’ of racism.

On Monday, Derry Sinn Féin MLA Martina Anderson, along with Emma Sheerin, Colm Gildernew and Linda Dillon proposed a motion that the Assembly recognises the Racial Equality Strategy 2015 - 2025 was not fully implemented and is now significantly outdated.

That it acknowledges the commitment contained in New Decade, New Approach to the publication of a new and updated racial equality strategy within 100 days of the restoration of the Assembly.

It further recognised the positive contribution made to society by those from Black, Asian and minority ethnic (BAME) backgrounds, deplores the discrimination BAME communities face regularly and condemns racism in all its forms.

And also commits to act urgently on the forthcoming report on the review of hate crime legislation, calls for the promotion of an anti-racism ethos in schools and further calls on the Executive to formulate and implement urgently a meaningful racial equality strategy.

An amendment was tabled by Paula Bradshaw from the Alliance Party who comes from the most culturally diverse constituency in Northern Ireland, South Belfast.

Her amendment focused on direct input from the BAME community who will ‘co-design’ the updated strategy.

It was also agreed that there will be cross-departmental cooperation to implement eleven key actions identified within the report.

Lilian Seenoi Barr of NWMF welcomed the NI Assembly’s acknowledgement that the current Racial Equality Strategy (RES) has not been implemented adequately.

“As a community, we have been sounding the alarm on this for years so we are happy to see that the NI Assembly has taken this step in the right direction.

“However, I would like to note that Monday’s debate was only the beginning, we now need to see some action.

“We firmly believe  that the existing RES is not out-dated, whilst it is not a perfect plan, it's implementation provides us with an opportunity to monitor progress, identify gaps and improve it to deliver for people of Minority Ethnic backgrounds.”

She added: “We want it implemented and we will continue to call on the government to review the existing RES, to allocate sufficient funding and to establish a Ministerial Panel to help deliver positive outcomes for BAME individuals and communities.

“I would also like to thank the MLA’s who spoke on Monday for finally listening to us and although we are very pleased at the outcome of the debate, we know that the real work begins now and we look forward to working with the Executive in the coming weeks and months to see some real change come into play.”