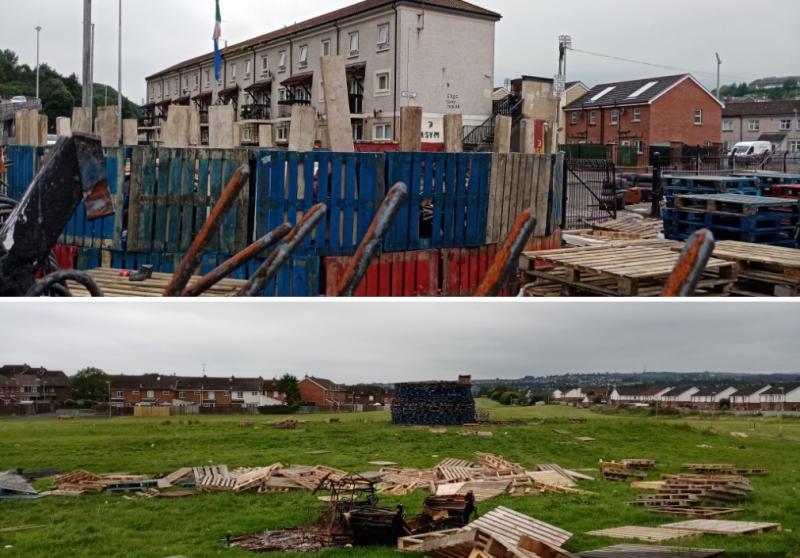 Derry people attending bonfires across the city this weekend have been advised to act ‘responsibly’ by social distancing amid the coronavirus pandemic.

Bonfires are traditionally set alight on August 15 in some nationalist areas to mark the Feast of the Assumption.

However, they continue to be a contentious issue with some people backing them and others outwardly opposed with the view that they should be replaced with family-friendly events.

That approach has been successful to some extent with different areas of the city now offering alternative celebrations – of particular note is the annual Gasyard Féile which takes place during the same week.

Many events were held online this year in order to adhere to coronavirus regulations around large gatherings but smaller events proceeded as planned.

This year hundreds of pallets have been gathered in the Bogside, Galliagh and Creggan.

Due to its central location and close proximity to housing the Meenan Square bonfire has attracted more attention over recent years.

Controversial material including the names of murdered police officers have also appeared on the pyre which a few thousand people normally attend.

Chair of the council’s bonfire working group, Independent Councillor Paul Gallagher said that through dialogue youths in Creggan agreed to remove 100 tyres from their bonfire.

The burning of tyres is illegal as they contain highly toxic fumes.

In Galliagh, tensions have been mounting due to the prolonged gathering of materials and associated anti-social behaviour.

The pandemic presents additional issues this year as regulations state that up to 30 people can meet outdoors but social distancing must be maintained.

Health Minister Robin Swann yesterday warned that NI faces ‘one of the most dangerous points’ in the crisis as the daily average of new cases has risen to 27.

On the need to adhere to public health advice on Saturday, Cllr Gallagher said: “If people turn up and don’t social distance there is no controlling that from a community and voluntary perspective.

“But it is about people being responsible for themselves and others.”

Bonfires were lit in unionist areas including the Fountain, Irish Street and Nelson Drive on August 7.

Online videos showed a sizeable crowd gathered at the Nelson Drive bonfire – the Irish flag was placed at the top of it and sectarian language was used.

It is tradition ahead of the Apprentice Boys of Derry parade the following day, which this year was a low-key event due to coronavirus restrictions.

In unionist areas bonfires are broadly welcomed by the local community.

Cllr Gallagher said feedback after unionist events confirmed there were no reported incidents.

Community worker, Conal McFeely of Ráth Mór in Creggan, recognised ‘major concerns’ about unregulated bonfires in the city, and said that many people would rather they did not take place at all.

But through engagement with young people in Creggan, he says it is their belief that bonfires are an age-old tradition which they want to carry on.

“Our engagement with young bonfire builders has been for the most part very positive.

“They have agreed to remove tyres, and other toxic materials from the sites, and to take part in this year’s clean-up.

“They don’t cut down trees – and they point out it that it is adults who have been dumping tyres and other materials at the sites – and that it is the young people themselves who have raising environmental concerns.

“There is an onus on us to encourage young people not to festoon their bonfires with offensive hate messaging and to resist the temptation to reflect the sectarian nature of some sections of our society.”

He added: “We cannot ignore the fact that youth centres, schools, athletics fields have all been closed throughout the spring and summer, and that throughout this period, the young people have complied admirably with all the lockdown strictures.

“And we as a society must realise that, given all the instability caused by Covid, these young people have major concerns about their own futures and wellbeing at this worrying period.

“Going forward our council needs to lead a proactive process of engaging young people instead of what is seen as a process of marginalisation.

“The bonfire issue is not unique to Derry or Belfast; it is a phenomenon which exists all over this island and beyond.

“And we fully recognise that there are accompanying issues with anti-social behaviour which must be address.”