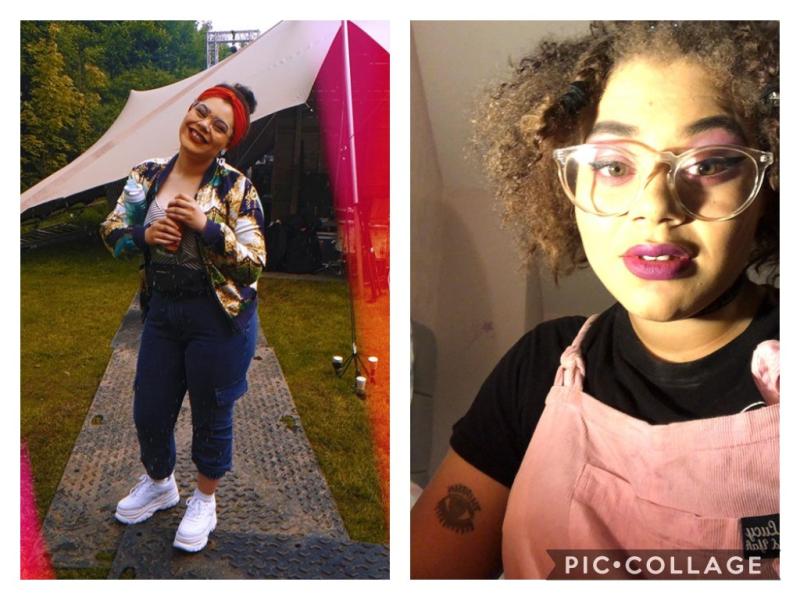 A Derry woman has reacted to public discourse about racism in the city and encouraged the local community to accept that it exists in order to bring about positive change.

Hannah Richardson has grown up in Derry and is well-known in the local rock music scene as lead singer/guitarist in three-piece rock band CHERYM.

Her mother is a white Irish woman and father a black Sierra Leonean.

Until now the 22-year-old has found the topic of racism difficult to address.

But she felt duty-bound to speak out following the Black Lives Matter protests and subsequent stories in the Derry News.

Nurse Beverly Simpson addressed the rally in Derry on June 6 then shared her family’s experience of racism in the city.

Last week, pharmacist Nkele Mushapho said she has been subjected to racism in the workplace with people requesting an ‘Irish pharmacist’ and constantly questioning her advice.

Ms Richardson was ‘shocked’ that people commenting underneath those stories seemed unaware of racism in the city and were in some cases denying its existence.

She has encountered racism since the age of 3 in nursery school and can’t understand the dismissive attitudes of some people.

“There are a lot of people who are in denial about the fact that racism exists here,” she said.

“I’ve lived here my whole life, it is a lovely place to live, the people here are fantastic.

“However, yes, there are a lot of racist people that live in Northern Ireland and Derry as well.

“Racism is so common that I now have a tendency to just get on with it because you know it’s going to happen again the next time you go out.  It becomes normal.”

She was raised by a white mother and all her friends are predominantly white.

Until now, she has never felt the need to make public her views.

But the experience of Ms Mushapho struck a chord and she couldn’t believe people were disregarding her account.

“I was reading those comments going, ‘seriously, you don’t know how bad it is’.  I know that not all people from here are racist, or have anything against black people, but a lot of people are ignorant to the idea of racism.

“A lot of people here find it acceptable to use racial slurs or casual racism because there’s never really been that many black people about to correct them or tell them otherwise - that ‘yes, that is offensive’.”

Ms Richardson has natural afro hair which has attracted negative attention in the past: “I used to be fine with wearing it out, loud and proud and happy days, but recently every single time that I would wear my natural hair as opposed to having weaves or wearing a hat, somebody would say something about me.

“Whether it be, ‘are you on your holidays or where are you from?’

“I was walking through Foyle Street recently when some boy came right up to me and screamed Mo Salah in my face.

“It’s every weekend, every single day I leave the house with my hair like that I would say it happens.

“It’s really, really tough.  So, it is shocking to see people being so dismissive of other people’s experiences because I assumed everybody knew that it was like this but they clearly don’t.”

The 22-year-old believes that now is the right time for everyone to have conversations about race.

She was dismayed by comments underneath a post by former politician Pat Ramsey a number of years ago in which he shared a story of racist abuse directed at a group of black people visiting the city.

On nights out people are ‘the worst’ because they see a group of black people and approach them, she said.

At times it can be positive but on other occasions ‘slurs are thrown about’.

Looking back, Ms Richardson ponders whether she should’ve engaged with people commenting under Pat Ramsey’s post.

However, the most recent comments with people saying Ms Mushapho was ‘lying’, ‘Derry is not like that’,  ‘Irish people have history of oppression and wouldn’t act in such a way’ couldn’t go unaddressed, Ms Richardson said.

“Your own experience of oppression should not ever take away from the experiences of black people, if anything it should make you more compassionate towards another minority suffering from racism.

“Is it because people can’t relate to black struggle that they have to turn the oppression back on themselves.

“We need to take a look at what’s going on under our noses.”

In her view, it is right to shine a spotlight on injustices everywhere but she believes it is wrong to overlook what is happening in the city by directing comments at Ms Mushapho such as ‘racism exists in South Africa too’.

“That’s like saying, ‘your experience doesn’t matter to me, take a look at your own people’”, Ms Richardson added.

She despises use of the word ‘coloured’ saying it is completely inappropriate when describing a black person.

Experts on racism say it is regarded as a highly offensive racial slur which recalls a time when casual racism was a part of everyday life.

In the US, because of the country's era of racial segregation, it is among the most offensive words for describing a black person.

Ms Richardson believes some people in Derry are intentionally racist but many others are completely unaware, they lack a basic understanding of what terms are racist.

She explained: “A lot of us are ignorant on the subject, you might have made racist remarks in the past but you yourself might not be racist.

“As long as you learn from that racist remark, take what you can from it and accept you may have offended someone then that’s a good progressive way to be.”

Reflecting on the way forward, she concluded: “Does racism exist in Northern Ireland? Totally.

“Does it exist in Derry? Aye.

“Don’t be afraid to ask questions, to ask other black people