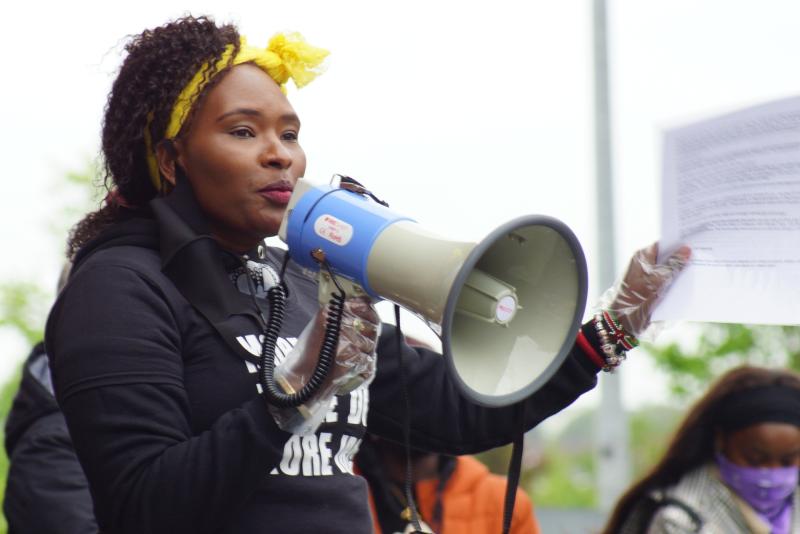 Lilian Seenoi-Barr speaking at the June 6 rally in Derry.

Organisers of a recent Black Lives Matter rally in Derry have met with the Justice Minister to discuss their concerns about how the protest was policed.

The rally in the Guildhall on June 6 went ahead despite appeals from the police and politicians for it to be postponed because of public safety fears in relation to the Coronavirus pandemic.

Police handed out 57 fines at the rally for breaches of public safety regulations.

After the protest, NWMF wrote to Justice Minister Naomi Long describing the police response on the day as 'disproportionate' and called for all fines to be rescinded and for a police apology.

NWMF members held an online meeting with Ms Long and other members of the Alliance party on Friday to discuss their concerns.

The meeting, that had around 36 people in attendance, also included representatives from ACSONI, Ethnic Minority Sports Organisations NI, Hapani, Diversity Youth NI and individuals from the black and minority ethnic community.

Lilian Seenoi-Barr, Director of NWMF was among those who attended the meeting.

"My main objective for joining the meeting was not to meet with the Alliance Party as a whole, but to directly address the Justice Minister," she said.

"We had already sent a letter to her last week in relation to our specific concerns about lack of consistency in the application of the law and our demands arising from the disproportionate policing of the‘ Black Lives Matter’ rallies on June 6 in both Derry/Londonderry and Belfast.

"We are yet to hear back from her in response to this."

Mrs Seenoi-Barr said she believed that Friday's meeting did not take seriously the 'hurt, pain and anger' at the treatment of the Black Asian and Minority Ethnic (BAME) community in Northern Ireland.

"We, the BAME community of the Northern Ireland, also know very well the risks of Covid-19 and that we are the more likely to suffer and die from this illness. The fact that we decided to protest against racism this very time, should not be dismissed as irresponsible but in fact it should be recognised as an act of human beings, desperate to be heard and respected."

After the online meeting Ms. Seenoi Barr further stated: "Generalised commitment to diversity in the workforce does nothing to indicate she understands the very specific experiences of black people in this society beyond a superficial commitment to greater representation.

"We still await a full response from Naomi to our letter, as we don’t feel that she did this today.

"I want to finish by saying that I personally admire the Minister and want to believe her when she says that she cares about diversity and racism in this country.

"I believe that honesty, acknowledgement and an apology are the first steps to changing attitudes, rebuilding trust and are the beginning of the end of racism and inequalities.”